The stock market run-up of the 1990s was fool's gold for many state and local pension funds. At the height of the dot-com boom, the typical pension fund had enough on hand to cover all of its expected future costs. But booms don't tend to last, and that one didn't, either. There are a couple of short recent reports that offer a useful update on the current status of public pension funds. One is the "Issue Brief" by Alicia H. Munnell and Jean-Pierre Aubry called "The Funding of State and LocalPensions: 2015-2020," published by the  Center for State & Local Government Excellence in June 2016. The other, by William G. Gale and Aaron Krupkin, is called "Financing State and Local Pension Obligations:Issues and Options," and was published as a Brookings Institution Working Paper in July 2016.

The basic calculation here is to look at the assets that public pension funds have on hand, and to compare that amount with what is needed to pay the benefits that have already been promised to be paid in the future. To make this calculation, you need to make a guess about what rate of return will be earned by the assets currently on hand. A typical current estimate is that pension fund assets will earn an average of 7.6% per year for decades to come. We'll return to the realism of that number in a moment. But using it as a given, Munnell and Aubry present calculations that the average state and local pension fund has on hand about 74% of what it needs to pay the benefits that have already been promised. (The exact percentage varies a bit because of some alternative accounting rules.) 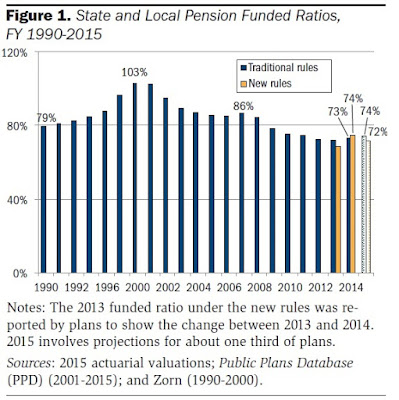 Notice that when the stock market peaked right around 2000, there was a golden moment when public pension funds were fully funded. But rather than build on that moment, by assuring that the funds would remain fully funded into the future, a number of state and local governments saw this as a chance to promise higher pension benefits and to make lower contributions to pension funds. Apparently these actions were acceptable both to elected officials and to the leadership of public employee unions. And now here we are.

And what if the pension fund assets on hand don't earn 7.6% per year? As Munnell and Aubry write: "Public pensions currently hold about 70 percent of their assets in risky investments, including more than half of their assets in equities. As discussed, on average, plans assume a nominal return of 7.6 percent on their whole portfolios, which implies nominal stock returns of 9.6 percent. In contrast, many investment firms project much lower equity returns ..."

By their calculations, if one assumes only a 6% annual rate of return on pension fund assets going forward, then the average funds are only 58% funded at present. And if one assumes that the rate of return on pension fund assets is only 4% per year going forward, then the average fund is only 45% funded at present. Of course, those pension funds with below-average funding at present would be even worse off if returns are lower than hoped-for. As Munnell and Aubry write: "What happens from here on out depends very much on investment performance."

Assuming that we will not have the pleasant surprise of very high investment returns that rescue the pension funds, what policy options are possible? Gale and Krupkin walk through the choices. As they write: "The implications of the projections are unpleasant but straightforward. Governments that face significant shortfalls will have to cut employee benefits, raise employee contributions, or finance higher employer contributions with tax increases or spending cuts. The eventual changes may be modified (or hidden) by pension reform, but the basic direction of the required changes is clear."
Ultimately, the argument is over who will bear the shortfall in public pension funds. The candidates are current retirees, current government workers, previous government workers who haven't yet claimed benefits, or the public through either taxes that are higher or government services that are lower than they would otherwise be.

I don't have a good sense of what sort of deals should be cut when some public pension funds inevitably can't fulfill their promises. But I do know that a hefty dose of the blame should go to the specific state or local coalitions of elected officials, public sector unions, and voters that found it easy to promise future payments, but apparently impossible to assure that sufficient funds were put aside for those promises. In many places around the country, public pension funds have been run with a reasonably high degree of responsibility (if not always quite as prudently as I would have preferred if I was a state employee), or where meaningful reforms in the direction of pension solvency have already been undertaken.  But where the behavior has been imprudent, those state and local governments should have to face their own voters, and those public unions should have to face their own workers.