Back in 2006, the state of California enacted a law to establish a cap-and-trade market for selling carbon emissions. The market covers about 85% of state carbon emissions. The broad idea was that the state would use a mixture of regulatory rules and the carbon market to cut emissions. Moreover, the state would raise money through regular auctions of "allowances" to emit carbon. But in early 2016, the price of carbon allowances being bought and sold in the secondary market fell below the minimum "price floor" that the state of California would charge for these allowances. Because it was cheaper to buy allowances in the secondary market from those who already owned them than from the state, 90% of the available carbon allowances went unsold in the May 2016 auction, and California received about $880 million less than expected.

Danny Cullenward and Andy Coghlan describe what happened in "Structural oversupply and credibility in California’s carbon market," which appears in The Electricity Journal (June 2016, 29, pp. 7-14). (The article isn't freely available on-line, but many readers can probably obtain access through library subscriptions.) But the broader issue here goes beyond the California auctions and should be a concern to anyone who advocates a cap-and-trade approach to reducing carbon emissions. A couple of years ago, prices for carbon allowances in the European Union carbon trading market also dropped dramatically. Is what went wrong in the California cap-and-trade market for carbon emissions related to what happened in the EU--and do these experiences point to an underlying problem with this approach?

Here are a couple of figures from Cullenward and Coghlin about the recent California experience. The first figure shows how many carbon allowances remained unsold after each auction since 2011. The solid line shows unsold allowances for current carbon emissions. The auction also sold allowances for emissions up to three years in the future, which are shown with the lighter bars. You can see that in the past, most of the allowances were sold, but not the pattern changes in early 2016. 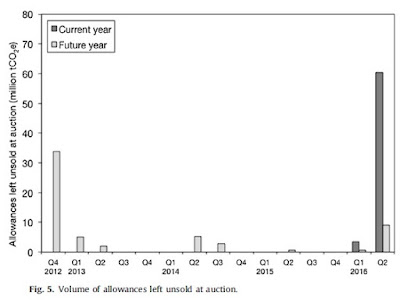 
"The history of California’s carbon market can be separated into four phases: (a) an initial speculative trading period prior to the first quarterly auction; (b) an intermediate phase following the launch during which the market regulator informally indicated its goal of relaxing cross-border resource shuffling regulations; (c) a period of stability following the formal adoption of resource shuffling reforms, with secondary prices stable at a small transaction cost above the auction price floor; and (d) a new phase in which government-run auctions fail to sell all available allowances and secondary market prices fall below the auction price floor." 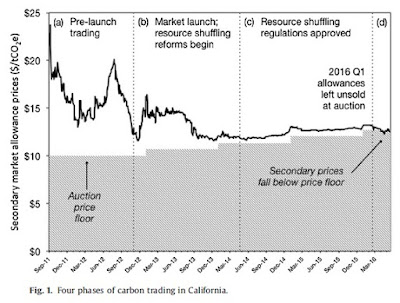 Cullenward and Coghlan point to several main issues for the California carbon market. One issue is that California wasn't just relying on the carbon market to reduce emissions: instead, the state was also enacting an array of standard regulatory rules to reduce carbon emissions. I had not known that even back before the market started, the official plan was for regulatory steps to account for 80% of the reduction in carbon emissions, and the carbon market for only 20%. As the authors write:  "As a result of these design choices, the carbon market’s role in driving climate mitigation and ensuring the economic efficiency across sectors is far less significant than at first it might appear."

In addition, there are always issues that arise in the fine print of how carbon emissions are happening and what counts as a reduction in carbon emissions. In California, one of the issues involved electricity companies that received energy generated from out of state. When the 2006 law went into effect and the carbon market was looming in the near future, many California utilities started signing contracts with their out-of-state suppliers specifying that they were not buying the electricity from coal-burning generators, but only the electricity from natural gas-burning generators, hydroelectric power, and wind or solar. This "resource shuffling" meant that the California utilities could be legally credited with lower carbon emissions, although the actual way that electricity was generated didn't change. The state of California tried to pass various rules to limit this kind of resource shuffling.

Given these issues, a prominent group of California energy economists had forecast back in 2014 that, as Cullenward and Coghlin put it, "the most likely market outcome was a persistent condition in which the supply of compliance instruments (including both allowances and CARB-approved [California Air Resorces Board]  carbon offset credits) would exceed market demand."

One final kicker is that the 2006 legislation had an end-date of 2020, and without new legislation, California apparently cannot plan for its carbon  market to exist after that date. Thus, carbon emitters in California only need to figure out if they are likely to have sufficient allowances to make it through to 2020--and it certainly appears that plenty are available.