On one side, there seems to be near-universal agreement that the US economy would benefit from workers who had higher skill levels. But if the rising skill levels are generated by the  immigration of high-skilled workers, this consensus can become wobbly.  The National Academy of Sciences offers a useful overview of these issues in Immigration Policy and the Search for Skilled Workers: Summary of a Workshop, published late in 2015. As the title implies, this report is a description of a conference, and most of the report is in the form of having the rapporteurs, Gail Cohen, Aqila Coulthurst, and Joe Alper, paraphrases presentations made at the conference.

High-skilled immigration is tied both to education and to the labor market: if a country like the United States welcomes foreign students to American colleges and universities, as undergraduates, graduate students, and faculty, there will inevitably be more situations where US-based companies want to hire this foreign-born but geographically available talent. Here are a couple of illustrative figures from an presentation by Lindsay Lowell. The left-hand panel shows that the US attracts by far the largest number of international students in total terms. The right-hand panel shows that when focusing just on science, technology, engineering, and mathematics students, the US is still near the top in the percentage of those students who are international. 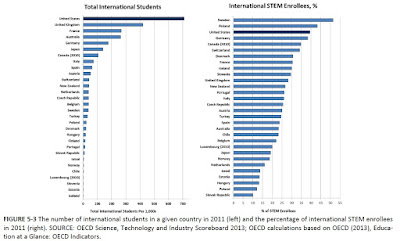 One result of this influx of foreign talent is that the enormous US economy, shown by the red dotted line below, is among the world leaders in the share of its workforce who fall into the broad job category of "researchers"-- which is presumably a good thing in the coming knowledge economy. 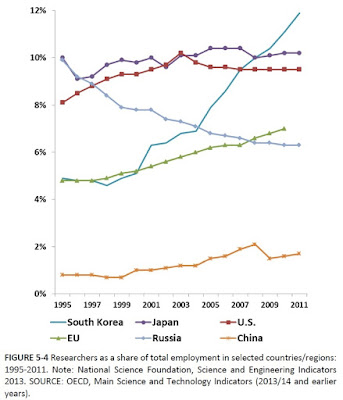 Richard Freeman described this education-to-employment connection for technology-based skills in his presentation, paraphrased like this:

U.S. National Science Foundation estimates that 63 percent of all post-doctoral STEM students working in U.S. universities are international students, and that 49 percent of international post-doctoral fellows received their PhDs in the United States. There has been a corresponding increase in the number of scientific papers coming from U.S. laboratories that have Chinese co-authors or coauthors from other emerging economies. These international students are not merely getting an education in the United States—they are also becoming U.S. STEM workers after graduation. In 2005, over a third of all STEM workers with PhDs were foreign born, with 64 percent receiving their PhD from U.S. universities. Over a quarter of U.S. STEM workers with Master’s degrees were born in another country and 15 percent of foreign-born STEM workers with Master’s
degrees received that degree in the United States. According to a different dataset, the percentage of foreign-born workers in U.S. STEM jobs increased from 11 percent to 19 percent between 1990 and 2011 for those with Bachelor’s degrees, from 19 percent to 34.3 percent for those with Master’s degrees, and from 24 percent to 43 percent for PhDs.

Lowell noted that after STEM fields, business was the next most-popular field for high-skill immigrants. Here's a paraphrase: "After STEM fields, business was the most popular subject of study for international students in the United States during that period. The impact of a large number of business students may be substantial on growth, because it is often the business majors who take advantage of ideas and bring them to market ..."

The economics of immigration involves evaluating a set of tradeoffs. Do immigrants help the economy to grow, for example by allowing native workers in the economy to specialize in ways that potentially raise productivity and wages for everyone? Or do immigrants only compete for existing jobs in a way that reduces job prospects and standard of living for native workers? As William Kerr points out in his presentation, there are different historical examples of each of these. A study of the chemists who fled Nazi Germany for the United States suggest that they helped the US chemical industry to grow substantially. A study of the wave of Russian mathematicians who came to the US in the 1990s suggests wages and job opportunities for native-born US mathematicians were reduced as a result.

When looking only at high-skill immigration, it seems clearly beneficial to an economy to have immigrants who are also gifted entrepreneurs, building companies that provide jobs and secure high-wage employment. Moreover, there seem to be what economists call "agglomeration effects" in technology, where a group of people with interrelated technical skills all come together in one place, there can be an ongoing growth of innovation and production that exceeds what this group would have accomplished if they were dispersed. To put this in concrete terms, it's a good thing for the US economy that the Silicon Valley agglomeration, which relies heavily on an influx of technical and business talent from all around the world, is located in this country.

The less clear-cut case involves what might be called undistinguished high-skill immigrants--that is, someone who is at best an average computer programmer or laboratory researcher. By definition, the undistinguished are less likely to create companies or be a key ingredient in an agglomeration. However, they may well compete with average native high-skill workers for jobs and wage. But here as well, the question is whether high-skilled immigrants may in some ways be complementary with high-skilled native labor.

A lot of the NAS report considers public policies from different countries about high-skilled immigration. The US stands out as a country that has not been especially encouraging to high-skilled immigration, but seems to get a disproportionate share of those immigrants nonetheless. As the report points out, in the United States, about 70% of immigration is family related, another 15% is humanitarian, and the remaining 15% is employment-based (which includes temporary high-skilled immigrants). In Canada and Australia, by contrast, about 30-40% of immigration is family-based or humanitarian, and the remaining 60-70% is employment-based. But as Lowell noted (according to this paraphrase), the US still does very well in the global contest for talent:


Immigration policy is just one tool of many that can result in a better, more qualified, nimble and innovative workforce. Luckily for the United States, the nation does well in other areas—the quality of our institutions of higher education, the salaries that U.S. employers pay, the flexible labor markets with many job opportunities, and the relative ease with which foreign workers integrate in the U.S. workforce, among others—that enable the country to be competitive in the international market for high-skilled workers.

In the past, policy arguments over high-skilled immigration have often been jumbled together with overall arguments about comprehensive immigration reform, but the issues raised are not the same. Higher education is expanding dramatically around the world, emerging-market economies are growing more rapidly than the world average, and global talent pool is expanding quickly, too. Competition for where these workers choose to locate will be real and ongoing. But in the 21st-century global economy, only some of these high-skill workers will not be planning to immigrate permanently. Many other will be seeking to make connections and build experience, and then moving elsewhere. In this sense, the policy issues of  high-skilled immigration are often not about permanent migration, but instead are about flexibility of work arrangements and geographic locations in an interconnected world.

At the NAS conference, Madeleine Sumption offered the intriguing thought that the US system of enticing high-skill immigrants through a mixture of educational and business opportunities, along with temporary work visas, may be the broadly the right approach for talent in the global economy. But in her view, the existing US approaches to high-skill migrants needs an overhaul with a big dose of additional flexibility. Sumption said: "The U.S. has the right model, it is just falling apart. ... We need to fix that model rather than think of something totally new.”
Posted by Timothy Taylor at 10:05 AM