The headline finding from The 2016 Long-Term Budget Outlook just published by the Congressional Budget Office is that the ratio of federal debt/GDP is projected to rise from its current level of 75% in 2016 to 141% in 2046--which would be the highest level ever for the US economy.

As a starting point, the long-run pattern of federal debt-to-GDP looks like this when looking back over US history and then projecting forward 30 years. Previous peaks for federal debt include World War II, World War II, the Civil War, and the Revolutionary War, as well as rises in debt incurred during the 1930s and the 1980s. But the CBO projectionssuggest that US borrowing isn't on a sustainable path. 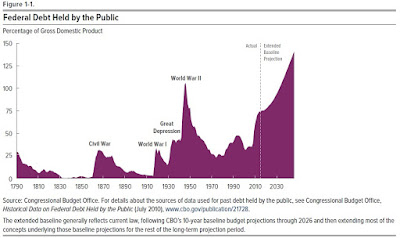 What driving these estimates? Essentially, the CBO estimate is a status quo projection. It's based on current laws,  combined with existing trends for population (like the aging of the population) and a few other estimates (like interest rates and health care costs). Of course, the report also includes how the estimates would be affected by changes in laws and economic parameters. But for the moment, let's just focus on the central estimates for spending and taxes, which look like this: 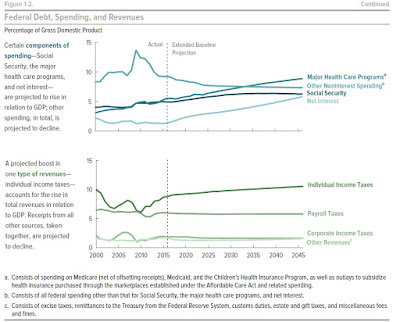 As an overall statement, the CBO projects a large rise in the debt-to-GDP ratio because under current law government spending is projected to rise over time as a share of GDP, while taxes are not. In  the major categories of federal spending shown in the top panel, the two categories with the biggest projected rise over the next few decades are major health care programs and net interest payments. The tax projections are, again, a status quo projection of not much change over time, although individual income taxes rise a bit because (under current law) some taxpayers will be bumped into higher tax brackets over time and because in 2020, taxpayers who are receiving  high-cost health insurance from employers are scheduled to start owing some income tax on some of the value of that insurance.

Of course, projections like these are mutable. As Ebenezer Scrooge says to the Spirit of Christmas Future, before he looks at his own gravestone: “`[A]nswer me one question. Are these the shadows of the things that Will be, or are they shadows of things that May be, only? ... Men’s courses will foreshadow certain ends, to which, if persevered in, they must lead,' said Scrooge. `But if the courses be departed from, the ends will change. Say it is thus with what you show me!'"

The level of health-care spending, on the other hand, is at least to some extent determined by the size of the government subsidies for health care through Medicare, Medicaid, the Children's Health Insurance Program, the "marketplace" health insurance exchanges, and other methods. For example, a previous CBO study found that the federal subsidies to the "marketplace" health insurance exchanges will be about $110 billion this year. The share of Medicare spending which is covered by either payroll taxes of workers or premiums paid by the elderly keeps falling, so an ever-larger share of the cost of Medicare is covered by general funds. 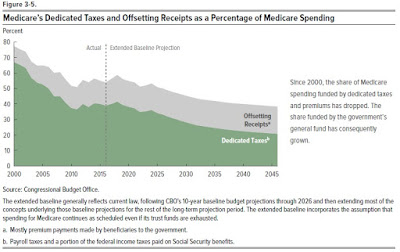 But in addition, it's useful to think about what the CBO budget forecasts leave out. Past sharp rises in the debt-to-GDP ratio have often been associated with war, or with the aftermath of Great Depression or Great Recession. History suggests a reasonable chance that the next 30 years will bring one or both of these. The future may also bring other public priorities, like dealing with what is likely to be a very large expansion in the population of elderly needing long-term care, or rebuilding America's 20th century transportation, energy, and communication infrastructure for the 21st century.