Will the Causes of Falling Real Interest Rates Unwind?

Interest rates around the high-income countries of the world have been dropping for two decades. Why? Will the pattern reverse itself?

Charles Bean, Christian Broda, Takatoshi Ito, and Randall Kroszner explore the phenomenon in Low for Long? Causes and Consequences of Persistently Low Interest Rates,  Geneva Reports on the World Economy 17, published as an on-line ebook in October 2015 by the International Center for Monetary and Banking Studies and the Centre for Economic Policy Research. Lukasz Rachel and Thomas D Smith tackle many of the same questions in "Secular drivers of the global real
interest rate,"  published in December 2015 as Bank of England Working Paper #571.

Today's ultra-low interest rates aren't just a result of the Great Recession and its aftermath. The "spot yield" on 10-year government bond (which can be thought of as the rate on a zero coupon bond), has been declining since the mid-1990s. Here's a figure from Bean, Broda, Ito, and Kroszner, who write:


"Reflecting the experience of the so-called ‘two lost decades’, Japanese sovereign yields have been low throughout the period, edging down from around 2% in 1997 to zero today. The downward trend is more marked for the other three jurisdictions, with yields starting at around 6-7% and falling to around 2% for the US and UK and to near zero for Germany. It is particularly notable that the financial crisis and subsequent Great Recession registers as little more than a minor blip on this downward trend; other forces have evidently been at work." 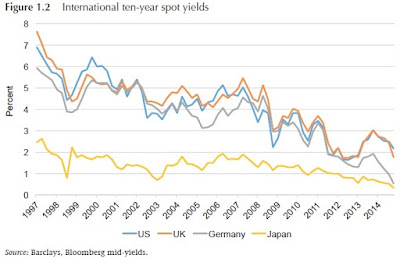 Notice that the decline in interest rates is global, which suggests that global economic factors are the driving force rather than national-level economic factors or  policy decisions. In addition, inflation has been mostly low and not changing much during this time, so this decline in nominal interest rates isn't a result of lower inflation. Indeed, the same pattern of declining interest rates appears in government-issued bonds that are indexed to the rate of inflation, like the Treasury inflation-protected securities in the US or the "indexed gilts" in the UK.

Thus, the analytical task is to offer some reasons why real interest rates for risk-free assets might have fallen by about 4 percentage points over roughly the last two decades. Interest rates are of course just a price for borrowing or lending money, and for economists the natural reasons for a lower price are that demand fell or supply rose--or some combination. In markets for loanable funds, a greater supply could emerge from a higher rate of saving, while a lower demand could result from a drop in the propensity to invest. In addition, there could be specific factors affecting supply and demand for low-risk "safe" assets, like Treasury bonds. The authors of both reports converge on a similar set of explanations, although their emphasis is a little different.

Rachel and Smith even summarize their findings with a handy-dandy supply and demand diagram, which focuses on three reasons for an outward shift in supply of saving (shown in blue) and three reasons for an inward shift in demand for saving (shown in red). They describe the shift in terms of basis points or bps (there are 100 basis points in a percentage point):


Our analysis suggests the desired savings schedule has shifted out materially due to demographic forces (90bps of the fall in real rates), higher inequality within countries (45bps) and a preference shift towards higher saving by emerging market governments following the Asian crisis (25bps). In addition, desired investment rates appear to have fallen as a result of the decline in the relative price of capital goods (accounting for 50bps of the fall in real rates), a preference shift away from public investment projects (20bps), and an increase in the spread between the risk free rate and the return on capital (70bps). ... This savings-investment framework provides a broad description of the relative sizes of the different forces at play. The confidence interval around such estimates is clearly very wide, but taken at face value, shifts in preferences appear to explain around 300bps of the decline in real rates since the 1980s, on top of the 100bps explained by the deterioration in the outlook for trend growth. 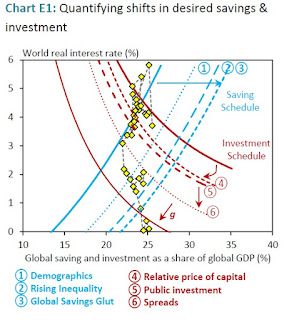 In a similar spirit, Bean, Broda, Ito, and Kroszner summarize their arguments in this way: w


Bringing together these various strands, we are led to conclude that there is no single driver of the decline in long-term risk-free real interest rates over the past two decades. Instead, different factors seem to have been more important at different times. In particular:
• Demographic pressure associated with increased longevity and lower fertility is likely to have been important, especially during the first half of the period. The surge in Chinese savings is likely to be a particular reflection of these demographic forces. But these pressures are likely to wane in coming years, as the population share of the high-saving middle-aged relative to that of dissaving retirees is presently around its peak.
• The gradual integration of China into global financial markets may have also placed downward pressure on the global real interest rate. The pattern of capital flowing ‘uphill’ from emerging to advanced economies is consistent with this explanation.
• While a decline in the propensity to invest seems less convincing as an explanation of the pre-crisis downward trend in real interest rates, it does seem likely to have played a role in explaining developments since 2008.
• Shifts in the supply of, and demand for, safe assets may also have placed downward pressure on the risk-free real rate, particularly since the financial crisis. This is consistent with the rise in equity risk premia in recent years, though some of the other evidence is less supportive.

Intriguingly, Bean, Broda, Ito, and Kroszner are willing to go out at least a little bit out on a limb. They note that financial markets are apparently expecting ultra-low interest rate to persist more-or-less indefinitely. In contrast, the authors write that while the timing is uncertain, a number of the supply and demand factors that have been bringing interest rates down seem likely to slow or even to reverse, which leads them "to conclude that there may be rather more of a future rebound [in interest rates] than market participants presently appear to expect, although the magnitude and pace at which that will happen remains highly uncertain." They spell it out this way:


There are several reasons why it is reasonable to expect the natural real rate of interest to rebound in the future.
• The demographic pressures that have raised the propensity to save since the late 1990s have already begun to move into reverse as the population share of retirees has grown. This looks set to be a strong
force depressing aggregate savings propensities over the next few decades.
• The headwinds following the crisis should ease if the recovery strengthens. Firms are likely to become less cautious about investing as uncertainty recedes. And even if the growth in investment opportunities is curtailed in the advanced economies for the reasons cited by the advocates of secular stagnation, there should surely still be plenty of investment opportunities overseas in the emerging and developing world. Balance-sheet repair should also become less pressing for highly indebted households as income growth picks up.
• The portfolio shift towards safe assets could also start to unwind. China is no longer accumulating US Treasuries in the way it did before the crisis. And the preference for safe assets may also begin to lessen as uncertainty recedes and the appetite for risk returns.

In contrast, when Rachel and Smith look at the factors driving low interest rates, they argue: "We expect most of these forces to persist and some may even build further."

The two reports also emphasize that a low interest rate environment poses some dangers and challenges for policymakers. Monetary policies to stimulate the economy may not work as well, and fiscal policy may need to shift in response. There may be a "search for yield," which refers to when financial investors and some financial institutions take on excessive risk in an attempt to get a higher return than offered by the near-zero interest rates. A problem can also arise for financial firms that were basing their business model on higher interest rates: for example, life insurance companies  made promises about what policies would be worth, not expecting a long-term decline in interest rates, and low interest rates can squeeze the profit margins for many banks. There are lots of theories about how policymakers might regulate and react, but this situation of ultra-low interest rates does not have clear historical precedent. Bean, Broda, Ito, and Kroszner review some history of interest rates, and note:


The very low level of long-term risk-free real interest rates in the advanced economies is historically most unusual. Real rates have rarely been so low; when they have been, it has almost invariably been during or after a war, when there was a degree of financial repression and/or inflation was elevated. The present configuration of low real rates with low inflation appears to be unprecedented.