My long-ago memory is that basic classroom experiments in physics and chemistry would produce a graph of data that was pretty close to a straight line, or a smooth curve. In social science, it's more common to see a rougher pattern, with the points scattered around. As a result, the social science research on "power laws" is full of graphs that raise my eyebrows, because there are lots of graphs where the points fall very close to a straight line. The fit looks too good! Xavier Gabaix provides a readable overview in "Power Laws in Economics: An Introduction," appearing in the Winter 2016 issue of the Journal of Economic Perspectives, which pushed my  (Full disclosure: I've worked as Managing Editor of JEP for 30 years now. All JEP article back to the first issue are freely available on-line compliments of the publisher, the American Economic Association.) 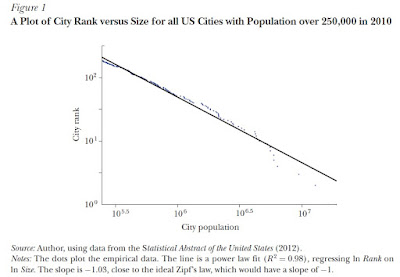 As Gabaix writes: "A slope of approximately 1 has been found repeatedly using data spanning many cities and countries (at least after the Middle Ages, when progress in agriculture and transport could make large densities viable, see Dittmar 2011). There is no obvious reason to expect a power law relationship here, and even less for the slope to be 1." 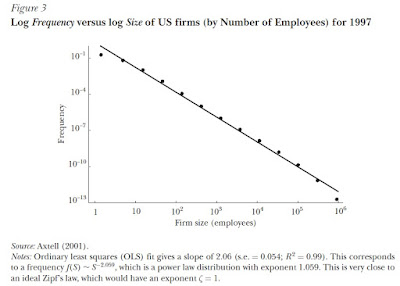 Or here's an example about the distribution of daily stock market market returns. You can read the details of the calculations in the Gabaix article, but again, the axes are expressed as powers-of-10, and a linear relationship seems to emerge. 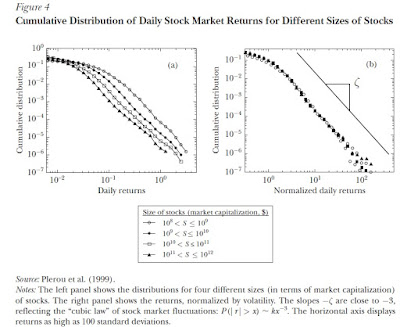 Or here's an example of a power law in the relationship between the pay of CEOs and the size of firms. Here, the labels on the graph are expressed as logarithms. When the size of the firm rises, the so does CEO pay--but in an exponential power-law kind of way. Gabaix writes: "In a given year, the compensation of a CEO is proportional to the size of the firm to the power of 1/3, S(n)1/3, an empirical relationship sometimes called Roberts’ (1956) law." He argues that this pattern of larger firms paying more to their CEOs can explain much the rise in CEO pay over time, as well as cross-differences in what CEOs are paid. 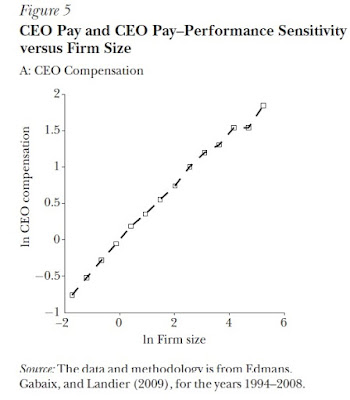 Why do these kinds of power law relationships show up so often? Say you start of with a random distribution of something, and the different points in your data all tend to experience proportional growth (positive or negative). However, this particular data (like city size) can't turn negative. In addition, the total size of the system can't grow in an unbounded way. Gabaix explains how with a few additional assumptions this process will result in the kind of straight-line power laws shown here. Of course, this kind of explanation then needs to be adapted and applied to each specific situation.

Want a power law outside of economics? Here's a graph where the typical mass of an animal is shown on the horizontal axis with a power-of-10 scale, and the metabolic rate, or energy requirement of that animal each day, is shown on the vertical axis. I'm sure that clever biologists can give reasons for why this should be so. But given what certainly seem to be substantial differences in animal behavior, it's not obvious to me that, before the data was available, they would have expected straight-line power-law to emerge here, either. 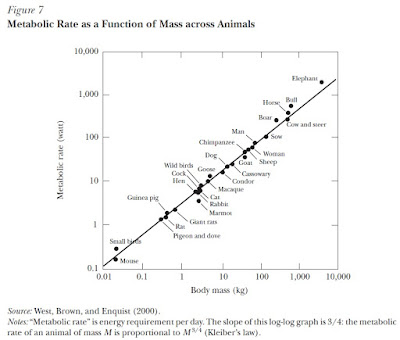 Posted by Timothy Taylor at 9:35 AM