The Fed Semiannual Update: An Interest Rate Gap and the Balance Sheet

Twice each year, the Federal Reserve is required to submit to Congress a report about "the conduct of monetary policy and economic developments and prospects for the future." The most recent Monetary Policy Report went to Congress on February 10, 2016. A number of the themes will be familiar to regular readers of this blog. For example, there's a discussion of how US unemployment rates have more-or-less bottomed out, and whether there are some signs of a pickup in wage growth (see my post on "Unemployment is Bottoming Out, So What's Next?" January 25, 2016). There's a discussion of how the inflation rate is affected by fluctuations in energy prices, food prices (see "Breaking Down US Inflation Rates by Category," February 9, 2016). There's a discussion of how Federal Reserve policy of raising interest rates may not have a huge effect on emerging markets, because any negative effects they experience from capital outflows will be largely offset by how a lower exchange rate spurs their exports ("Bernanke on the Fed, the US Dollar, and the Global Economy," January 8, 2016).

Here, I'll just note a couple of other figures that caught my eye.

A divergence has emerged in the interest rates of advanced market economies, between the US and UK on one hand and the euro-zone and Japan on the other. Here are a couple of examples.
The first shows nominal yields on 10-year government debt. 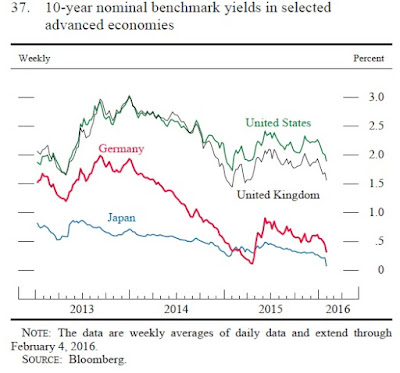 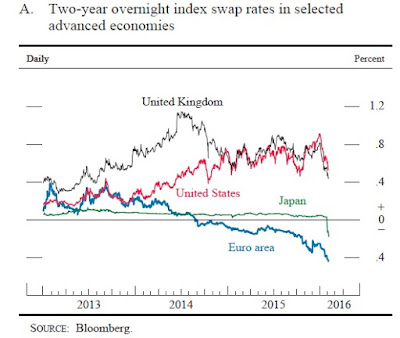 Both sets of interest rates show that the rates for the US and the UK are substantially above those for Japan and the euro-zone. The reasons for such a divergence are a jumble of expectations about growth rates, inflation rates, financial stability, and central bank policies. But whatever the reasons, this difference helps to explain why demand for US dollar assets is up and the US dollar exchange rate has been rising.

The big shift in the Federal Reserve balance sheet has leveled off. Just about anyone who is teaching a serious course about Federal Reserve Policy in recent years uses some version of this figure. It shows the assets and liabilities of the Federal Reserve system. For example, two of the main assets of the Fed are the US Treasury securities that is owns, along with the mortgage-backed securities and housing-related debt that it owns. The "other assets" are mainly certain premiums or discounts on these two other categories that for one accounting reason or another aren't built into the usual price of the asset. The two main liabilities of the Fed are currency--that is, Federal Reserve notes in circulation--along with the deposits it holds from member banks. The remaining "Capital and other liabilities" includes, for example, the US Treasury General Account, which is more-or-less the checking account through which the federal government pays its bills, and also includes some financial deals like reverse repurchase agreements.

The figure shows how the Fed balance sheet has evolves over time. Back in mid-2007, Fed assets were basically all Treasury securities, and its liabilities were basically all currency. But when the financial crisis hit in late 2007, several shifts happened.

The Fed set up an alphabet soup of agencies to make temporary loans to various financial institutions during the recession: for example, the Primary Dealer Credit Facility, the Asset-Backed Commercial Paper Money Market Mutual Fund Liquidity Facility, the Commercial Paper Funding Facility, and the Term Asset-Backed Securities Loan Facility. On the asset side, you can see how these loans blossomed for a time, then were repaid after the crisis, and these temporary agencies have now been shut down. Almost no one talks about these temporary agencies any more, but they were a rapid and innovative success in helping to prevent financial contagion from spreading.

As the temporary lending facilities phased out, you can see the quantitative easing policies come into play. The Fed started investing directly in mortgage-backed securities. It greatly increased its investments in US Treasury debt. On the liability side, banks began to hold much larger reserves at the Fed than the bare legal minimum they used to hold. The banks now receive interest on these reserve, too. These changes leveled out in the later part of 2014. But clearly, the Fed as a financial institution has been fundamentally changed from those not-so-long-ago days when it was pretty much all about US Treasury securities and currency.