The popular saying that "demography is destiny" is of course not literally true. Economic factors like demography set the stage, but actions still affect outcomes. As Stephen Hawking wrote in his 1993 book: "I have noticed that even people who claim everything is predetermined and that we can do nothing to change it, look before they cross the road."

That said, demographic patterns can greatly affect the economy. The Council of Economic Advisers has published the 2016 Economic Report of the President, which I commend to readers who would like a nice overview of the state of the US and world economy along many dimension. In the next week or so, I'll put up some posts on a few aspects of the report that jumped out at me. One such discussion was about the global workforce and patterns of global aging. The report shows the number of people in the working-age population in different regions of the world, both going back to 1950 and then projecting forward to 2070. 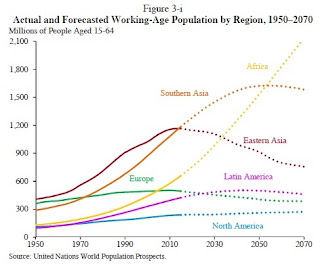 What patterns jump out? The working-age population in Europe didn't expand much since 1950, and has already peaked. In North America and Latin America, there's been some relatively modest growth in the working age population since 1950, but that will continue to be modest or flatten out in the next half-century. Asia has seen a skyrocketing workforce since 1950. However, the size of that workforce has already topped out and started declining in east Asia (think China and Japan, and surrounding countries), while it will continue to expand dramatically for a few more decades in south Asia (think India and surrounding countries). And in Africa, working-age population has already surpassed Europe and and in the next few decades is projected to first overhaul eastern Asia and then pass southern Asia. The report notes:


"Over the next 30 years, half of the world’s population will live in Africa and Southern Asia; global population growth will be driven by their high fertility and relatively young populations. As a result, the bulk of new workers in the global economy will be added in economies that have lower levels of education, technology, and capital, implying those workers will not be as productive, if current circumstances continue. By 2035, the number of people joining the working-age population from Sub-Saharan Africa and Southern Asia will exceed that from the rest of the world combined. This means both South Asia and Africa will be increasingly important to global growth."

These shifts in the workforce will be accompanied by shifts in the "dependency ratio," which is calculated by adding the the number of people 14 and under to the number who are 65 and older, and then dividing that total by the size of the working age population.  Most areas of the world have seen a fall in the dependency ratio from, say about 1960 or 1970 up to the present. But in most areas of the world--Africa with its rapid workforce growth excepted--are now headed for a sharp rise in the dependency ratio in the dccades ahead. 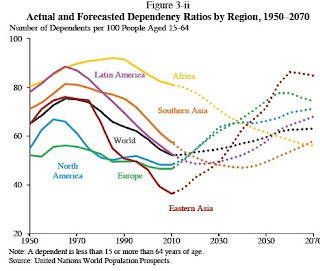 
"Global demographic trends are at a turning point. Population growth is slowing and, after increasing for the previous five decades, the proportion of the population that is working-age peaked at 66 percent in 2012. This proportion is projected to decline steadily for the next century. This slower growth in the working-age population—or outright contraction—will continue to be a drain on global growth for the foreseeable future. ...  Demographic changes also indirectly affect the amount of resources per capita through changes in household savings behavior across their life cycles. Lower dependency ratios (the ratio of people younger than 15 or older than 64 to the working-age population) can raise savings, which helps finance more investments and increases output. Finally, demographics indirectly affect productivity growth through changes in the quality of human capital formation and innovation. Nevertheless, the reverse is also true. Demographic changes can act as a drag on economic growth.

In thinking about the relationship between population, working-age population, dependency ratios, and economic growth, it's going to become more important over time to divide economic statistics by various relevant population  measures. Doing this can sometimes lead to unexpected conclusions.

For example, the report offers a US-Japan comparison. We all know that Japan's real GDP growth in the last 25 years has been disappointingly sluggish, right? The first two bars show that real annual GDP growth in the US has been roughly double that of Japan. But if you look at growth in real GDP per capita, you are then taking into account that Japan's population growth has been very slow--indeed, Japan's total population peaked back around 2008 and has been declining since. Thus when you look at growth of per capita GDP, the US lead over Japan is greatly reduced, as shown by the second set of bars. Now consider the working-age population in Japan, which peaked back around 1995 at about 87 million, and now has declined to about 77 million. If you look at annual growth of real GDP growth per working age population, Japan's proverbially sluggish economy has actually exceeded the US rate. 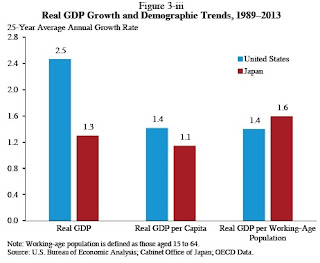 Posted by Timothy Taylor at 8:55 AM