U.S. firms are holding $1.8 trillion in liquid assets: that is, either cash or marketable securities. What's going on here?  Laurie Simon Hodrick tackles the question, "Are U.S. Firms Really Holding Too Much Cash?" in a July 2013 Policy Brief written for the Stanford Institute for Economic Policy Research. 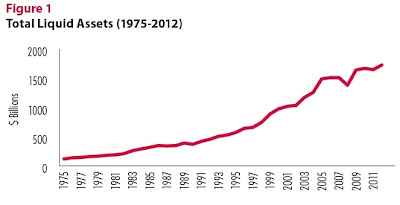 The argument usually heard for holding additional liquid assets is that the last few years have been times of considerable uncertainty about the economy and economic policy, so firms need a bigger cushion. This explanation has some truth in it, but it's not all of the truth.

1) This need for additional liquid assets is not affecting all firms or all industries equally, but instead is affecting a smaller number of highly profitable companies. For example, non-financial firms in the S&P 500 hold about $1.3 trillion in liquid assets. As Hodrick explains: "Five companies, General Electric, Microsoft, Google, Cisco, and Apple, account for 25 percent of the $1.27 trillion, while 22 companies account for half of it. ... [C]ash holdings are concentrated among highly profitable firms, many in the technology and health care sectors."

2)  Some of the cash holdings seem related to issues of the taxation of multinational firms. U.S. firms don't pay taxes on their international earnings until they "officially" bring the funds back to the U.S. Given that U.S. corporate tax rates are high by international standards, it makes sense to delay bringing back such funds until you're really sure that you want to do so. Hodrick: "General Electric leads with $108 billion held overseas at the end of 2012. It is interesting to note that $102.3 billion of Apple’s total cash holding of $145 billion was offshore in lower-tax jurisdictions at the end of March
2013." It's especially interesting, or ironic, that waiting to bring foreign earnings back to the U.S. for tax purposes doesn't preclude investing those funds in the U.S. economy--just like any other foreign investor can do. Hodrick writes: "It is also important to recognize that the “overseas” money owned by foreign subsidiaries need not be invested abroad, but instead can be held at U.S. banks, in U.S. dollars, or invested in U.S. securities. For example, according to SEC filings, $58 billion of Microsoft’s total cash holding of $66.6 billion is held by foreign subsidiaries. Surprisingly, about 93 percent of Microsoft’s cash held by foreign subsidiaries in 2012 was invested in U.S. government bonds, corporate bonds, and mortgage-based securities. The assets of Apple Operations International, Apple’s Irish subsidiary, are managed in Reno, Nevada, by employees at one of its wholly owned subsidiaries, Braeburn Capital, according to a Senate report, with the funds held in bank accounts in New York."

3) There's a long tradition in the economics and corporate finance literature of being suspicious about firms that hold large amounts of cash. After all, large amounts of cash on hand might help the job security and emotional comfort of the managers, but not necessarily be in the best interests of shareholders. There's an argument that cash-heavy firms should either have a plan for at least potentially investing that cash in a project that will increase future company profits, or a plan for paying it out to shareholders. I confess that I find it a little refreshing when firms hold large amounts of cash. It hints at a certain discipline on the part of management that they are waiting for an opportunity. Saying that you need a cash reserve to take advantage of unexpected opportunities sounds great--but after a few years of doing this, shouldn't firms be able to point to a series of actual unexpected opportunities of which they did take advantage?

There's are a few signs that, under pressure from shareholders and other investors, some firms are starting to pay out some of their cash hoard. "On April 23, 2013, Apple Inc. announced its intention to pay out a total of $100 billion in cash by the end of calendar year 2015, the largest total payout
ever authorized." However, by some estimates this payout will only be enough to keep Apple's overall cash hoard from increasing--not actually to diminish it.