In almost every high income country, the share of 25-34 year-olds with higher education is higher than that for the age 25-64 population as a whole--about 7 percentage points higher. This is the pattern one would expect to see if a country is expanding access to higher education. But the U.S. is an exception, where the share of 25-34 year-olds with with a tertiary education degree is lower than for the age 25-64 population. Here's an illustrative figure, taken from Education at a Glance 2013, published by the OECD, and freely available with a slightly clunky browser here.

Although the U.S. used to lead the world share of adults with tertiary education few decades back, the figure shows that this is no longer the case. There's no reason to expect this to change in the next few years. When it comes to graduation rates from upper secondary school, the U.S. now falls below the OECD average.

Similarly, if you look at the share of students who are going to enter tertiary education and emerge with a degree, the U.S. falls below the OECD average. 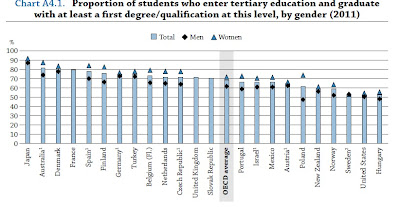 The issue here doesn't seem to be primarily one of underspending. The U.S. has above-average spending per student by OECD standards--but this is expected, because the U.S. also has higher income levels, and so paying salaries to teachers will cost more. The following graph shows per capita GDP on the horizontal axis and spending per student on the vertical axis. The best-fit line drawn through the graph shows the average pattern of how education spending rises with a country's per capita income. For primary education and for secondary education, the U.S. spending levels are right on the best-fit line. For tertiary education, the U.S. is noticeably above the line--that is, we spend more than one would expect given U.S. per capita incomes. 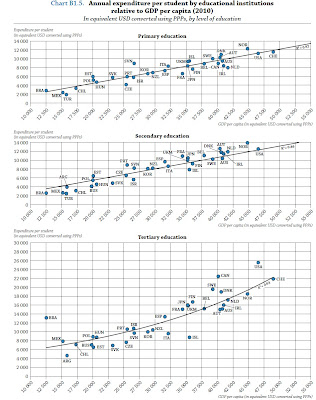 Thus, the most obvious story told by these data is a frustrating one for the U.S. education system: Spending is roughly where it should be, but performance is lagging badly.