The rate at which health care costs are rising had slowed down in recent years, and perhaps not unexpectedly, Obama's economic advisers have sought to draw the link that "As ACA Implementation Continues, Consumer Health Care Cost Growth Has Slowed." But an array of evidence suggests that something beyond that legislation--which after all, is mostly not yet implemented--is the cause.

1) The slowdown in the rise of health care spending was already being noted in newspaper articles back in early 2012. Writing in the New England Journal of Medicine in August 2012, Charles Roehrig, Ani Turner, Paul Hughes-Cromwick, and George Miller trace the timing and causes of the slowdown in "When the Cost Curve Bent — Pre-Recession Moderation in Health Care Spending."
They measured the extent to which the rise in national health care spending exceeded growth of "potential GDP: (that is, GDP adjusted to take out the effects of recessions and booms).  They find that the slowdown in health care spending started around 2003, and has been lower since 2005. Here's one of their figures:

They write: "Spending for physician and clinical services has grown particularly slowly since the curve bent in 2005. In the pre-recession period, we trace this slowdown to slow growth in physician-payment rates relative to overall prices in the economy. In the post-recession period, payment-rate increases have remained low and the growth in the utilization of physician services has diminished." The authors acknowledge that the recession may also have contributed to a slower rise in health care spending, but they believe earlier structural factors--not yet well-understood--played a bigger role.

2) The slowdown in rising health care costs since the recession is international, as a press release with the OECD Health Report 2013 explains. Here's a figure showing the rise in health care costs across OECD countries in recent years: notice in particular that the drop in public-sector spending on health care is greater than the drop in overall spending. 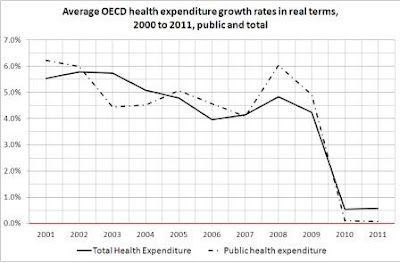 If the rise in health care costs is slowing down, and the health care cost curve is indeed bending, it would be huge news. For households, "Health Care Costs are Eating Your Pay Raise," as I posted back in January 2012. For government, rising health care costs for current employees, for the poor, and for retirees are the major drivers of why budget deficits are projected to become so very large in the next few decades.
Posted by Timothy Taylor at 6:00 AM