From time to time, I've posted figures to help illustrate the sharpness and severity of the financial and economic shocks that hit the U.S. economy starting in 2007 and lasting into 2009. Some examples (here and here) included interest rate spreads, net lending by the financial sector, the housing price bubble, inflows of international capital, and the like. But here's an offbeat measure: in the transcripts of the meetings of the Federal Open Market Committee, which is at the center of making decisions about monetary policy, how many times does the transcript note that laughter occurred? 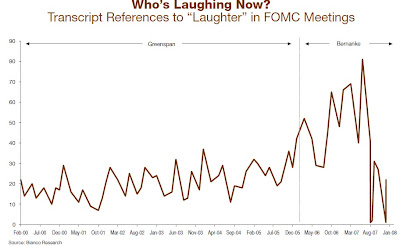 During the tail end of the Greenspan years, 10-30 laughs per meeting was about the norm. (Just to be clear, this humor is typically the sort of thing that would only provide chuckles to aficionados of monetary policy who are shut in a room together.) When Bernanke arrives, the laughter level rises up into the range of 70-80 laughs per meeting. But when the first stirrings of the financial crisis hit in late 2007, there are a few meetings with no almost no laughter at all.

The data only go through early 2008, because minutes of FOMC meetings are only released after a five-year lag. The figure is taken from a briefing book put together by the Stanford Institute for Economic Policy Research for their annual "summit" meeting last spring, and is based on data from Bianco Research.

Posted by Timothy Taylor at 3:26 PM