Three years ago, the Wall Street Reform and Consumer Protection Act, commonly known as the Dodd-Frank act, was signed into law by President Obama. The legislation took a peculiar form: rather than Congress actually writing a new set of rules and regulations, the law involved a massive set of requirements that regulatory agencies write new rules.

The law firm of Davis Polk and Wardwell has been publishing regular progress reports on how the rule-making is proceeding. By their count, the legislation involved 398 new rule-making requirements. According to the third-anniversary report, the deadlines for writing 279 of those rules have been reached, but only 107 rules have been completed. Of the 172  rules where deadlines have now been missed, regulators have not yet submitted proposals for 64 of them. By their count, so far there are 15 million words worth of regulations to implement the 898-page legislation, and the count is rising. 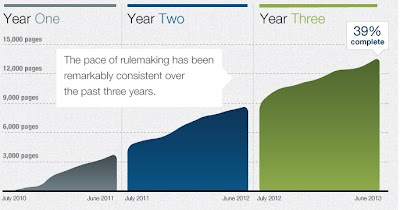 In some sense, this slow pace of producing final rules is no surprise, as I've discussed earlier here. Writing a rule involves a legally defined process of proposals, comments, revised proposals, and so on. Writing several dozen new major rules to govern financial institutions and markets would be a major undertaking: writing several hundred new rules is a gargantuan task. Of course, each rule is contested between those of differing views. In a real sense, Dodd-Frank was not actually about Congress enacting financial reform, but rather about admitting that Congress doesn't have enough knowledge to enact financial reform--and handing off the task to others.
That said, how are the reforms proceeding? Daniel Tarullo of the Fed Board of Governors gave a talk on the subject in May. Here's how he listed the positives, and what remains to be done. On the positive side:

"First, the basic prudential framework for banking organizations is being considerably strengthened, both internationally and domestically. Central to this effort are the Basel III changes to capital standards, which create a new requirement for a minimum common equity capital ratio.... Second, a series of reforms have been targeted at the larger financial firms that are more likely to be of systemic importance. ... The governing principle for this new set of rules is that larger institutions should be subject to more exacting regulatory and supervisory requirements, which should become progressively stricter as the systemic importance of a firm increases. ... A third set of reforms has been aimed at strengthening financial markets generally, without regard to the status of relevant market actors as regulated or systemically important. The greatest focus ... has been on making derivatives markets safer through requiring central clearing for derivatives that can be standardized and creating margin requirements for derivatives that continue to be written and traded outside of central clearing facilities."

As Tarullo points out, a number of these rules are still being implemented. On the other side, here are his limitations and shortcomings. For example, he writes that the new capital standards for banks are lower than he would prefer, and do not fully address the "too-big-to-fail" problem. He also emphasizes: "Most importantly, relatively little has been done to change the structure of wholesale funding markets so as to make them less susceptible to damaging runs. ... [S]ignificant continuing vulnerability remains, particularly in those funding channels that can be grouped under the heading of securities financing transactions." In particular, Tarullo mentions "[r]epo, reverse repo, securities lending and borrowing, and securities margin lending."

For a more detailed discussion of shortcomings of Dodd-Frank, I recommend "Financial Stability Monitoring" by Tobias Adrian, Daniel Covitz, and Nellie Liang at the Fed, written as Finance and Economics Discussion Series 2013-21. For example, when Congress requires that rules are written for tighter regulation of depository institutions, they create incentives for larger parts of the financial sector to move out of the regulated sector and to what is often known as the "shadow banking" sector. These are financial entities that accept investments that can be withdrawn in the short-run, but often invest in financial securities that pay off over the long run--which as we have learned can set the stage for a financial crisis if many investors try to sell off these investments at the same time. As another example, when Congress attempts to set rules that limit what regulators can do when a financial institution is in trouble, it risks making a future financial crisis even more severe. They also emphasize Tarullo's point that the Dodd-Frank Act "does not address structural problems in wholesale short-term funding markets, such as the susceptibility of money market funds to investor runs or the inherent fragility of repo markets."

It is remarkable and depressing to me that three years after the passage of this legislation, and more than four years after U.S. financial markets nearly melted down in late 2008 and early 2009, the issues of how to reform the financial sector remain so fluid and unresolved.