It would be comforting to believe that medical decisions are always make based on a clean, clear evaluation of the health of the patient. But when it comes to births by Caesarean section, it's hard to believe that this is the case. For example, here's a comparison of C-section rates across countries. (The figure was produce for a briefing book distributed by the Stanford Institute for Economic Policy Research, using OECD data.) 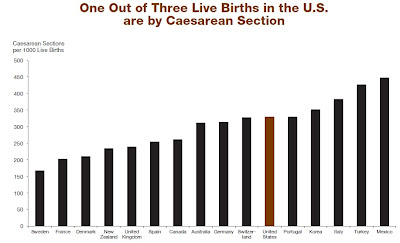 I am unaware of any evidence about the health of mothers and children that would explain why the U.S. rate of C-sections is similar to Germany and Portugal, twice as high as Sweden, but only 2/3 the rate of Mexico. China seems to be the world leader, with nearly half of all births occurring via C-section.

In the U.S., the rate of C-sections has risen dramatically over time, as Michelle J.K. Osterman and Joyce A. Martin lay out in "Changes in Cesarean Delivery Rates by Gestational Age:United States, 1996–2011," a National Center for Health Statistics Data Brief released in June. 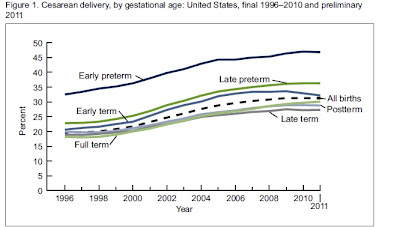 In the US, C-sections were 21% of all births in 1996, but 33% of all births by 2009, although the rate has not increased since then. To be sure, the calculation of costs and benefits for doing a C-section will evolve over time, as the surgery gradually become safer. But this sharp increase doesn't seem to be driven by health calculations. As Osterman and Martin point out, "the American College of Obstetricians and Gynecologists developed clinical guidelines for reducing the occurrence of nonmedically-indicated cesarean delivery and labor induction prior to 39 weeks." And the much higher rates of C-sections in countries where surgery can be less safe than in the U.S., like China and Mexico, are clearly not driven by concerns over the health of mother and child.