Looking Back at the Baby Boom

The trend toward lower fertility rates seems like an inexorable long-run trend, in the U.S. and elsewhere. The U.S. total fertility rate--that is, the number of average births per woman--is about 2 right now, and the long-run projections published by Social Security Administration assume that it will hold at about 2.0 over the next 75 years or so.

But I recently saw a graph that raised my eyebrows. Here is the fertility rate for US women (albeit only for white women for the early part of the time period) going back to 1800, taken from a report done for the Social Security Administration.  If you were making projections about fertility rates in about 1940, and you had access to this data, you might have predicted that the rate of decline would level off. But it would have taken a brash forecaster indeed to predict the fertility bump that we call the "baby boom." 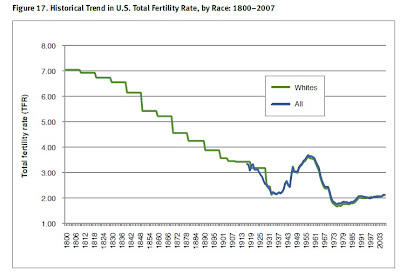 1) The baby boom was a remarkable demographic anomaly. It gave the U.S. economy a "demographic dividend" in the form of a higher-than-otherwise proportion of working-age adults for a time. But the aging of the boomers is already leading to financial tensions for government programs like Medicare and Social Security.

2) There's really no evidence at all that another baby boom might happen: but then, there was no evidence that the first one was likely to happen either. Someone who is wiser and smarter than I about social trends--perhaps a science fiction writer--might be able to offer some interesting speculation about what set of factors and events could lead to a new baby boom.