Ads Flow from Newspapers to Internet

It's no secret that advertising has migrated on-line to the internet. But the rapidity of the change is nonetheless remarkable. Here's the growth in internet advertising as shown in an April 2013 report from the Internet Advertising Bureau. The annual growth rate for this advertising has been nearly 20% per year since 2003. 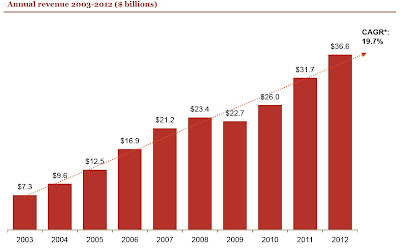 In contrast, here's a figure showing the change in newspaper advertising, taken from the Pew Media Center's State of the News Media 2013, from the section on newspapers written by Rick Edmonds, Emily Guskin, Amy Mitchell and Mark Jurkowitz.  The blue bars show print advertising; the green bars show the still-small digital advertising revenue that newspapers receive.

The State of the News Media 2013 also has a section on digital media, written by  Jane Sasseen, Kenny Olmstead and Amy Mitchell.

To put these advertising numbers in the context, Kantar Media estimates that the total U.S. advertising market in 2012 was about $140 billion. Here is their figure showing that fewer people are getting their news from TV, radio, and newspapers, while more are getting it from online or digital sources.

Many more people report getting connected to their news from social media sites like Facebook and Twitter. Overall, it may well be that people are consuming more stories related to the news, but in a digital world people have a much wider range of choices for the source of their news, and thus much greater control over the type of stories they want to see in terms of subject area, emphasis, and political slant.


Hat tip: David Warsh discusses the comparison between newspaper and internet advertising, along with some thoughts about the future of the newspaper business,in his August 12 column at his "Economic Principals" website.
Posted by Timothy Taylor at 6:00 AM