According to World Bank estimates, Mexico's total GDP ranked 14th among the countries of the world in 2012, just behind Spain and just ahead of South Korea--and with an economy more than double the size of Sweden, Poland, or Argentina. But while Mexico is a light-heavyweight in the world economy as measured by total size of its economy, it's also an economy that has had disappointingly sluggish growth in recent decades. Jesús Cañas, Roberto Coronado and Pia Orrenius summarize the results of a conference held last fall at the Federal Reserve Bank of Dallas on these issues in "Will Reforms Pay Off This Time? Experts Assess Mexico’s Prospects," published in the Second Quarter 2013 issue of Southwest Economy.

As a starting point, here are some background figures. The top line shows the path of output in Mexico since 1950: note the sharp rise from 1950 up to about 1980, the proverbial "lost decade" for Mexico's economy in the 1980s, and the modest rebound since the mid-1990s. The other lines show the underlying causes behind those patterns: Mexico's economy basically tracks the path of productivity growth, which has been sluggish for the last few decades. 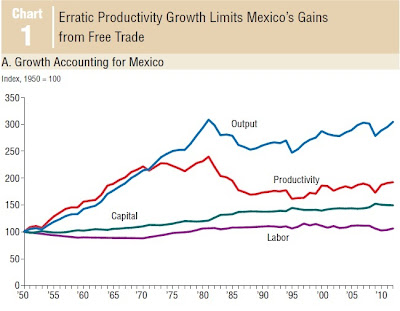 Here is a figure showing the per capita standard of living in Mexico, generated by the ever-useful FRED website run by the Federal Reserve Bank of St. Louis. During the period of rapid growth from 1950 to 1980, per capita GDP more-or-less tripled. The economic ground lost during the 1980s wasn't recouped until the late 1990s. Mexico's per capita growth has been about 1.1% annually over the last 25 years, which isn't a large amount for an emerging economy, and it's been a bumpy economic road to get there.

For a sense of Mexico's bumpy economic road, here's one more figure generated from the FRED website. This shows annual rates of real GDP growth. Notice that even after Mexico's "lost decade" of the 1980s,  it experienced brutally deep recessions in 1996 and again in 2008.

The underlying story in Mexico seems to be that of an economy which has opened dramatically to international trade, but hasn't run into two problems. One is competition from China. The authors quote Gordon Hanson to the effect that Mexico has the misfortune of "producing what China produces and not what China buys." But China's competitive challenge to Mexico appears to be diminishing as wages in China increase dramatically.

The bigger constellation of economic problems for Mexico is not reforming its economy in ways that would help to stimulate productivity growth. The essay cites a number of issues here: dysfunctional credit markets that don't get funds to small and medium-sized firms; inefficient infrastructure companies, including telecommunications, transportation, electricity, and energy; an inflexible labor market with many workers stuck in informal employment. The article describes evidence from Fausto Hernandez Trillo, a professor at Centro de Investigación y Docencia Económicas in Mexico City: "Only one-fifth of the 3.7 million firms in Mexico are in the tax-paying formal sector. The remainder makes up the informal economy, which accounts for 72 percent of private sector employment.
“There are two Mexicos,” Hernandez Trillo said, “a modern, productive formal sector with large firms, and a poor informal sector dominated by small, unproductive firms.” The national oil company, Pemex, is a cash cow for the national government, and thus lacks money to invest in locating and developing energy resources.

To me, one of the most striking figures discussed in the paper is from Stephen Haber, looking at Mexico's political history. With the widely-used "Polity" scoring method, he looks at the level of democracy in Mexico over time. This scale runs from 0 to 100, with pure dictatorship at 0 and anything above 85 counting as "democracy. By Haber's estimate, Mexico only really crossed into become a democracy about a decade ago. 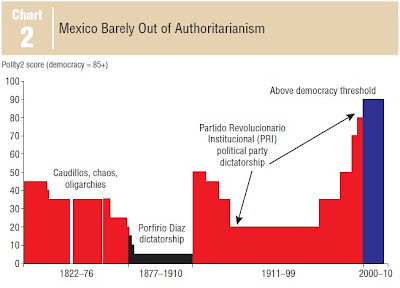 In some sense, Mexico's main economic challenge is political--that is, it involves the question of how to undertake the legal and institutional changes that will encourage innovation and productivity growth in a way that reaches throughout Mexico's entire economy.