As America's population ages, many more elderly people are going to need services and supports, ranging from a little help at their own home to community based care, residential care facilities, and skilled nursing home care. The Congressional Budget Office usefully lays out the issues in its June 2013 report, "Rising Demand for Long-Term Services and Supports for Elderly People."

The starting point, of course, is that the U.S. population is aging. 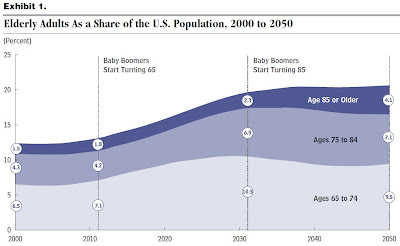 At present, the majority of the value of the provision of long-term care services is provided by "informal care"--that is, care provided without compensation by family and friends. The CBO estimated the value of this care by looking at estimates of the number of hours involved, and then valuing that time at $21/hour, which is roughly the average cost of hiring someone to provide this kind of care. 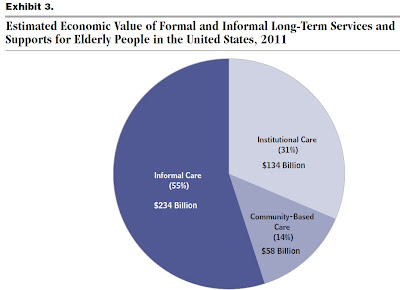 As the proportion of older adults climbs, especially those over 85, many of them are going to need greater assistance. Here's an estimate of the need for assistance among elderly people living in the community--that is, not those who need residential or skilled nursing home care. With more people living longer and with fewer children than previous generations, informal care is unlikely to be able to meet the growing need for these services. 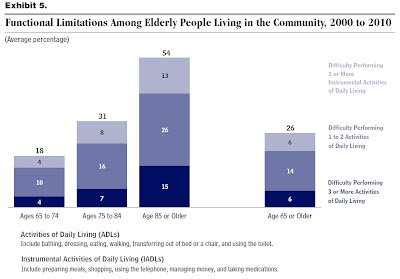 Of course, as people become older they are more likely to need institutionalized care, as well. 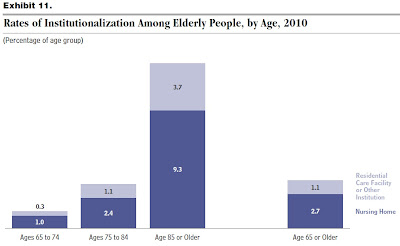 I'm not at all sure how best to start building social institutions to address these coming needs, but here are some thoughts.

1) It would of course be best if most people could make some provision for the costs of their own care. But many Americans don't have much in savings. And getting people to buy long-term care insurance is a tough sell, in part because it's unclear how this care will be provided several decades in the future and what it will cost, and in part because Medicaid eventually steps in and covers nursing home care for those whose assets are depleted--which gives people less incentive to buy private insurance. In fact, more than half of the current nursing home residents in the U.S. are having their bills paid by Medicaid. For more discussion, see this post on "Long-Term Care Insurance in the U.S."

2) Some other high-income countries have government programs to pay for long-term care. Not surprisingly, they spend a substantially greater share of GDP on long-term than does the U.S. In any event, the long-term U.S. budget picture is grim enough that adding another entitlement for the elderly isn't likely. For more discussion, see "Long-Term Care in International Perspective."

3) It's typically much less expensive if the elderly can continue to live in the community, whether in their own home or in some kind of community residence. CBO reports: "In 2011, the annual cost of care for a resident paying either out of pocket or with private insurance in a semiprivate room in a nursing home averaged nearly $80,000." Living in the community is also what most of the elderly prefer. Thus, the challenge is how to retrofit homes to be safe for the elderly, and to start planning and setting up a network of community-based residences near shopping, libraries, parks, public transit, and health care, and providing a network of services, but in a way that continues to encourage the provision of informal care and support by family and friends. It will be difficult to draw this balance.