At least as far back as the Luddite movement of the early 19th century, when those who has made textiles by hand protested against labor-saving machinery, workers have feared that they might be replaced by machines. As the capabilities of robots increase and unemployment rates remain troublingly high, this fear may seem even more immediate today. Frank Levy and Richard J. Murnane look at the interaction between workers and machinery in "Dancing with Robots: Human Skills for Computerized Work," written for the Third Way think tank.

Levy and Murnane offer a number of useful examples for thinking about the interaction between machinery and workers. Consider the dishwasher: "The job of washing dishes consists of six tasks: clearing the dishes from the table, applying soap and hot water, scrubbing, rinsing, drying, and stacking dishes in the cabinet. The technology we call a “dishwasher” substitutes for human effort in four of these tasks, but not in the other two. Technology usually changes work by changing
how specific tasks are performed."


Levy and Murnane look at which occupations are growing (as a share of the labor force) over time, and which ones are shrinking. The picture looks like this: they argue that jobs with nonroutine physical work or unstructured cognitive work are hard to automate--and those are the kinds of jobs that are growing. 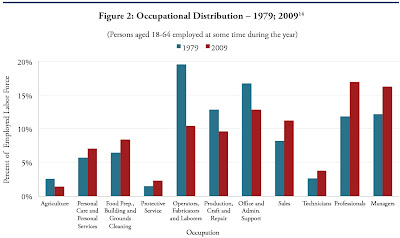 Here are a few thoughts about their arguments:

1) A worker with access to dishwashers can be far more productive than a worker who must do all six of the tasks by hand. But if your job was washing, rinsing and drying dishes by  hand, you could be out of luck. The the challenge for all 21st century workers is to find ways of being the one who uses technology and robots to magnify the productivity of the tasks that you do, not being the one who does tasks that can be replaced by a robot. In the economics jargon, you want technology to complement your work, not to substitute for it.

2) Back in the Stone Ages when I was in junior high school, we were all required to take "shop" classes in woodworking, metal-working, electrical circuits, and graphic drawing. While it remains important for students to have a grip on how material things work, someone who was relying on that kind of education would have experienced a miserable job market in the last few decades. Indeed, a large number of workers were educated in the 1950s, 1960s, 1970s and 1980s for jobs that barely existed by the end of the 20th century. The 21st century equivalent means knowing how things work, but also being able track down relevant information and make sense of it in solving problems that arise. Helping students memorize routines for addressing a task isn't a path to career advancement, because if a task can be reduced to a routine, it can also be automated. This calls for a shift in the educational system that is subtle, but substantial in teaching what Levy and Murnane call "foundational skills."

3)  At least to me, the bottom line for all concerns about machinery replacing workers is that if this was a big problem, surely it would have already been happening steadily during the last two centuries? It's easy to make the case that machinery and robots alter what workers do, and that it will shake up occupations and wages, but it flies in the face of two centuries of history to argue that mechanization will lead to mass unemployment.