A typical intro-level conception of the economy points to the household sector as net savers, who then through the financial system end up financing the investments made by firms. But while that overall pattern was a fair description of reality about four decades ago, times have changed. Peter Chen, Loukas Karabarbounis and Brent Neiman describe the shift in patterns in "The Global Rise of Corporate Saving," published as National Bureau of Economic Research Working Paper #23133 (February 2017). (NBER working papers are not freely available online, but many readers will have access via a library subscription.)

Here's the pattern of global saving by sector. Government saving relative to government GDP hovers just a bit above zero percent. But back in 1980, households saved about 14% of GDP while firms saved about 9%. Those shares have now flip-flopped, with firms now saving 13-14% of global GDP, and households saving 7-8% in recent years. 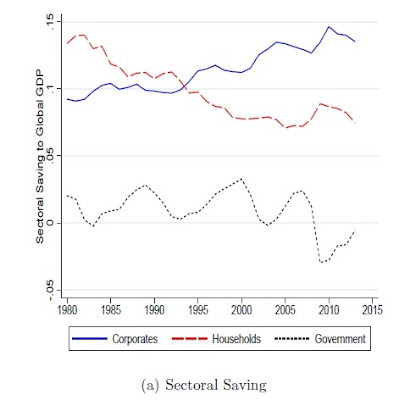 Meanwhile, investment across the sectors of the economy has remained much the same. 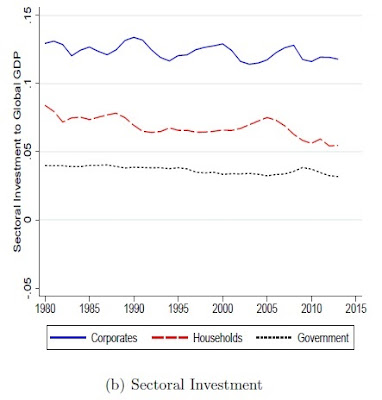 This change is not wholly unexpected, in the sense that it fits with other economic patterns that have been noted, like high levels of corporate profits and high levels of household borrowing. Sorting out the reasons why corporate savings have become so large are still being investigated. But at this stage, the authors point out that the pattern is theoretically consistent with a model that includes lower levels of real interest rates, lower prices for investment goods, and lower corporate income tax rates.

This shift in the source of global saving represents a shake-up in the global financial system. For example, it means that firms become less likely to turn to external capital markets when raising money, because they can use their own savings instead.  At some ultimate level, of course, firms are owned by people, like shareholders and other owners. Thus, one way to describe this shift is that the underlying parameters of the global economic system have shifted so rather than households saving funds directly, households now use firms as the mechanism through which they save.
Posted by Timothy Taylor at 10:56 AM