How Close is the EU to a Single Market in Goods?

Back before the European Union became embroiled in how the euro was affecting trade balances and government borrowing, it was focused on a more basic project: reducing trade barriers between its members in the name of creating a single market. How's that going?

Vincent Aussilloux, Agnès Bénassy-Quéré, Clemens Fuest and Guntram Wolff offer an overview in "Making the best of the European single market," written as a "Policy Contribution" for the Bruegel think tank (Issue No. 3, 2017). They argue that the gains from the European single market have been substantial, that productivity and investment are lagging in the EU, and that a renewed boost for the single market might be a big help.  I was particularly struck by their finding that trade across EU nations is at about one-fourth the level of trade across US states. They write (footnotes omitted):


"Applying the synthetic counterfactuals method to various EU enlargements, Campos et al (2014) find that “per capita European incomes in the absence of the economic and political integration process would have been on average 12 per cent lower today, with substantial variations across countries, enlargements as well as over time”. This average figure is within the range found in the limited and fragile literature on this issue (5 to 20 percent, depending on the study). ...

"Still, trade between European countries is estimated to be about four times less than between US states once the influence of language and other factors like distance and population have been corrected for. For goods, non-tariff obstacles to trade are estimated to be around 45 percent of the value of trade on average, and for services, the order of magnitude is even higher. If the intensity of trade between member states could be doubled from a factor of 1/4 to a factor of 1/2 in order to narrow the gap with US states, it could translate into an average 14 percent higher income for Europeans (Aussilloux et al, 2011)." 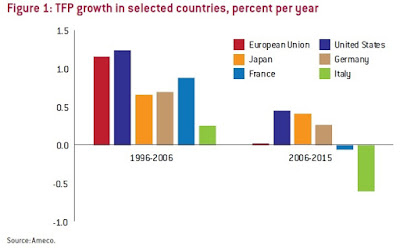 One factor that is intertwined with Europe's productivity slowdown is its investment slowdown. Notice that for the EU as a whole, the levels of saving (blue line) and investment (red line) more-or-less track each other from 2000 up through 2011. But after 2011, saving rises and investment drops. In other words, there is capital being saved in the EU, but it's being invested somewhere else (as illustrated by the rise in the current account balance.) 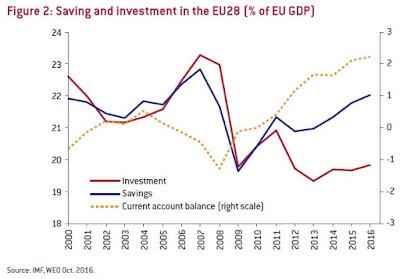 Aussilloux, Bénassy-Quéré, Fuest and Wolff note that the problem for additional moves to a single market is that many of the easier steps have been taken. Thus, they propose that the next steps should focus on a relatively small number of key industries where economies of scale and trade might be especially productive. They write:


"The extensive literature on how the single market could be deepened generally concludes that the easy gains have already been secured. The remaining barriers to trade are now in the services sectors and are much more difficult to eliminate, since services are and should be regulated: health care, legal services or data-intensive industries all need proper regulation. Since discrimination between nationals and non-nationals has already largely been eliminated, the challenge now is to harmonise regulations so that companies can develop their activities across borders in the same smooth way as they do within a country. ...

"Despite much talk and some relative successes – for example in the air transport sector – many of the most prominent services sectors remain fragmented. This is the case in the energy sector, rail transport, telecoms, consumer insurance markets, banking and professional services, among others. Although the big players in each of these sectors have activities in several EU countries, they operate not as if there was one single market, but on a series of distinct national markets.

"The very slow progress in the pan-European integration of these sectors over the last 20 years suggests that a new approach is needed. For sectors with strong cross-border externalities and/or the potential for large economies of scale, the EU could define a single rule book and establish a single regulator or a network of national regulators, similarly to competition authorities. In networks, the national regulators would abide by the same rules, the same principles and methods, and by the same jurisprudence under the supervision and the coordination of a European regulator. This would be compatible with different national policies in certain areas, such as the choice of different energy mixes. Creating larger and more integrated markets is particularly important in the digital sector."

The authors also have discussions of various other possible steps, like a common business registration system across the EU countries, creating a "common consolidated corporate income tax base" to make it easier for companies to deal with varying tax laws across countries, and ways to better coordinate rules across countries about environmental protection, unemployment insurance, and social security. But the overall message is that despite a few decades of effort, and wave upon wave of rules that have often been about smalls-scale details, the EU remains a long way from a "single market" in big industries that matter.