We seem to be surrounded by wave upon wave of new information and communications technology. However, measured rates of productivity growth rates have been slow for more than a decade, with the slowdown starting well before the Great Recession and continuing after its end, both in the US and around the world, Bart van Ark seeks to explain this situation in "The Productivity Paradox of the New Digital Economy," which appears in the Fall 2016 issue of International Productivity Monitor (pp. 3-18). In  a nutshell, his answer is that "the New Digital Economy is still in its `installation phase' and productivity effects may occur only once the technology enters the `deployment phase'."

At present, it's not just that productivity growth has slowed down, but counterintuitively, the sectors of the economy that make the biggest use of information and communications technology have been leading the way in this slowdown. Van Ark writes: 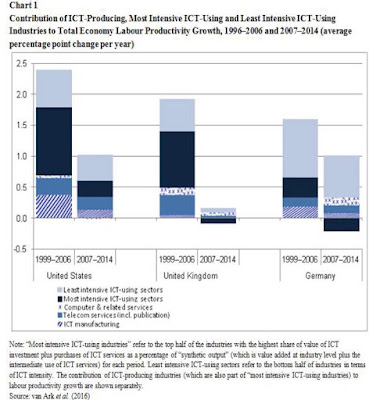 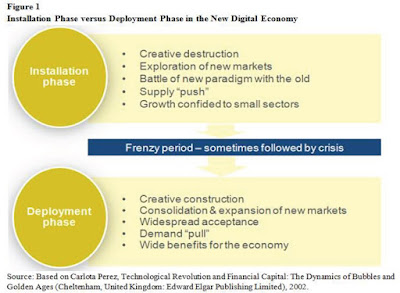 As an example of where the installation phase is still taking place, van Ark points to digital services and "big data" projects:

An earlier post on "When Technology Spreads Slowly" (April 18, 2014) offered some discussion of transformative technologies that took decades to spread, with a focus on tractors and electrification.

I would be remiss not to mention that several other articles in this issue are worth particular attention, too, For example, Daniel Sichel reviews Robert J. Gordon's book, The Rise and Fall of American Growth,, and Gordon offers a response. Later in the same issue, Nicholas Oulton writes about "The Mystery of TFP," which stands for total factor productivity: "In all countries resources have been shifting away from industries with high TFP growth towards industries with low TFP growth. Nevertheless structural change has favoured TFP growth in most countries. Errors in measuring capital or in measuring the elasticity of output with respect to capital are unlikely to substantially reduce the role of TFP in explaining growth. The article concludes that the mystery of TFP is likely to remain as long as measurement error persists."
Posted by Timothy Taylor at 8:00 AM