Update on the Social Cost of Carbon

That task of estimating the social cost of carbon emissions is fraught with uncertainty. Still, it's a question where some answers are going to be more plausible than others--and assuming that the correct answer is "zero" runs a risk of incurring substantial costs in the future. Those who would like to dig down into how these estimates are done might be interested in "Valuing Climate Damages: Updating Estimation of the Social Cost of Carbon Dioxide," published in January 2017 by a National Academy of Sciences Committee on Assessing Approaches to Updating the Social Cost of Carbon, co-chaired by Maureen Cropper and Richard Newell. (The report is available here, and uncorrected galley proofs of the report can be downloaded free.)

The NAS report is mainly about how these estimates are done and how they might be improved, but it also provides some background on the existing estimates. As the report explains:


The social cost of carbon (SC-CO2) for a given year is an estimate, in dollars, of the present discounted value of the future damage caused by a 1-metric ton increase in carbon dioxide (CO2) emissions into the atmosphere in that year or, equivalently, the benefits of reducing CO2 emissions by the same amount in that year. The SC-CO2 is intended to provide a comprehensive measure of the net damages—that is, the monetized value of the net impacts—from global climate change that result from an additional ton of CO2. Those damages include, but are not limited to, changes in net agricultural productivity, energy use, human health, property damage from increased flood risk, as well as nonmarket damages, such as the services that natural ecosystems provide to society. Many of these damages from CO2 emissions today will affect economic outcomes throughout the next several centuries.

The US government has for some year had an Interagency Working Group that produces estimates of the social cost of carbon. As the report notes:

It's worth unpacking that number just a bit. Here's an illustrative table giving a sense of the range of estimates under various conditions. 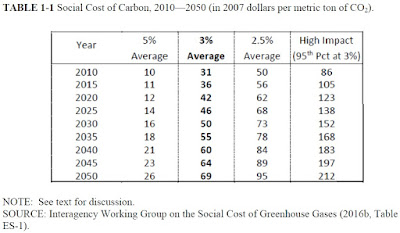 The social cost of carbon is based on a range of computer simulations. There are several different "integrated assessment models," in which which a "CO2 emissions pulse is introduced in a particular year, creating a trajectory of CO2 concentrations, temperature change, sea level rise, and climate damages." Another key parameter the "equilibrium climate sensitivity," which represents a distribution of the effect that carbon emissions could have on climate in the future. There are also various scenarios for how emissions and various socioeconomic variables will evolve. The approach of the Interagency Working Group is to run a bunch of computer simulations with different combinations of these variables and different random draws of the "equilibrium climate sensitivity" parameter from its overall distribution, thus giving them a sense of how these different underlying assumptions can interact with each other.

The rows of the table show different years. The social cost of carbon rises over time, as the levels in the atmosphere rise and the costs become greater.

The columns show different assumptions about what economists call the "discount rate." Most analysts accept the idea that if we are thinking about spending a fixed amount of current resources, it makes more sense to spend the money reducing a current harm than a future harm. To put the point more bluntly, taking an action to save 500 lives right now is more valuable in the present than taking an action to save 500 lives a century from now.  Exactly how much more valuable are current benefits than future benefits? As you  might imagine, the answer to that question is controversial, and so standard practice is to offer a range of estimates. A commonly used discount rate is 3%, which implies that each year a benefit is further off in the future, it's worth 3% less. A higher discount rate thus puts a lower weight on future benefits; a zero discount rate would mean that a benefit receives at any time in the future, no matter how far into the future, would be just as valuable as a benefit received right now.

The social cost of carbon calculation matters for public policy, because it's the value that is currently used by government rules and regulations when taking carbon costs into account. For perspective, the federal gasoline tax is currently 18.4 cents/gallon, and when state and local gas taxes (which vary across jurisdictions) are added to the mixture, total gasoline taxes are now about 49 cents/gallon. The usual rationale for such taxes is that they are a "user tax" so that those who drive also pay for updating and maintaining the roads. If the government set a carbon tax so that those who are emitting carbon through burning gasoline would would pay the cost of their emissions, a carbon tax of $42/ton of carbon emissions would work out to a gasoline tax of about 38 cents/gallon.