China has 75% more capacity for generating wind power than does the United States, but it actuall produces 14% less wind power. Long Lam, Lee Branstetter, and Inês M. L. Azevedo explain the situation in "Against the Wind: China’s Struggle to Integrate Wind Energy into Its National Grid," written as a "Policy Brief" for the Peterson Institute for International Economics (PB 17-5, January 2017). Here's a figure from their paper, showing China's capacity for wind generation outstripping the US, while the actual electricity generated falls short: 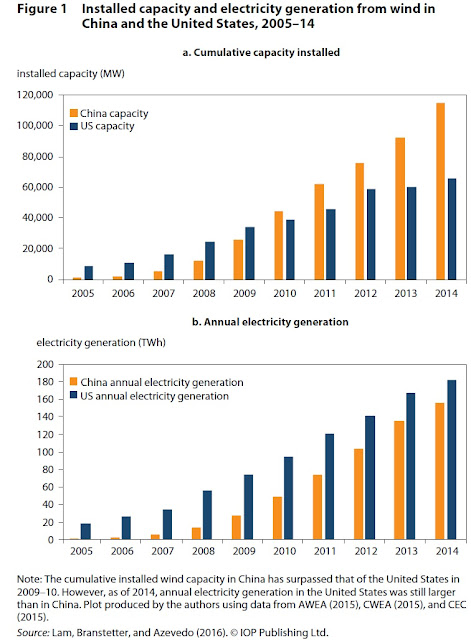 
"But close examination of China’s aggressive top-down approach to the promotion of renewable energy reveals that it has fallen far short of its ambitious goals. Turbines were quickly installed—but many of them were not connected to the power grid. After some turbines were connected, the state-owned enterprises (SOEs) that operate the national grid often refused to accept energy from them. These problems led to inefficiencies that are without precedent in the Western world. They help explain the shocking fact that although its installed wind energy capacity is 75 percent larger than that of the United States, China produces 14 percent less wind energy than the United States. Even in a political system with a strong centralized government, China’s push for renewable power faltered in the face of entrenched interests, weak incentives, and conflicting policy priorities.

"After accounting for the cost of building wind capacity that was not effectively utilized by the national grid, the cost of wind energy in China in the mid-2000s was twice as high as projected. A decade later costs had declined, but they were still 50 percent above projections. Consequently, the cost of carbon mitigation by replacing coal-generated electricity with wind energy has been four to six times higher than official estimates."

Apparently, up through about 2010, as much as 35% of China's wind capacity wasn't connected to the electrical grid at all. Since then, the electrical grid operators often "curtail" the electricity produced by wind power--which means they simply refuse to purchase it. The authors explain why:


"Data from the first half of 2016 show a national curtailment rate of 21 percent—significantly higher than in any year between 2011 and 2015—and the highest curtailment rates typically lie in the second half of the year ...  Curtailment rates are high and rising because keeping them high serves the financial interests of the grid companies. Since 2014 the growth of China’s energy-intensive industries has sharply decelerated, limiting electricity demand. At the same time, global coal prices have fallen sharply, lowering the cost of coal-powered electricity. Overestimating energy demand, the authorities permitted the construction of too many coal plants, forcing many of them to operate well below capacity. The intermittency of wind, and the need for the grid operators to purchase and dispatch the right amount of fossil energy–generated electricity to offset that intermittency, make wind power significantly more expensive for grid companies to use than coal power. Seeking to maximize their margins, the grid companies buy increasingly cheap coal energy and increase curtailment of wind energy."

China's wind power seems to be an example of how powerful government control can push in one direction, but even in this setting, economic realities will push back. I've read a lot about China's efforts to expand renewable energy sources in the last 10-15 years, but  Lam, Branstetter, and Azevedo put the results to date in perspective when they write:

"The still-large gap between installed capacity and renewable energy usage helps explain one of the painful realities of China’s green energy push: After a decade of unprecedented expansion, renewables have risen from 6 percent to only 10 percent of China’s total primary energy consumption—and hydropower generates 8 percentage points of that total ..."

Posted by Timothy Taylor at 8:47 AM