Vulnerable Jobs and the Desire to Migrate

People all over the world economy are in "vulnerable" jobs, which the International Labor Organization defines as "own-account work and contributing family employment"--that is, you're working for yourself or for your family, rather than for an employer. Not surprisingly, the desire to emigrate is high in many parts of the world, and seems to be on the rise. Here are two figures from the World Employment and Social Outlook: Trends 2017, published in January 2017 by the International Labour Organization.

For starters, here's a figure showing some employment patterns across the world. The first panel shows that the official unemployment rate doesn't look all that dramatically different across developed, emerging, and developing economies. The  big difference is the "vulnerable" employment rate, which is about 10% in developed economies, nearly half the workforce in emerging markets, and more than three-quarters of the workforce in developing countries. As ILO notes, "these workers have less access to social dialogue and are less likely to exhibit job security, regular incomes and access to social protection than their wage and salaried counterparts." 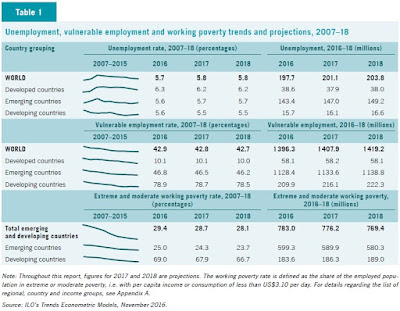 The bottom panel shows the share of workers living in extreme or moderate poverty, which is defines as iving on less than US$3.10 per day. In emerging countries, this is nearly one-quarter of all workers; in developing countries, it's about two-thirds of all workers.

It's no surprise that many people who are staring these economic prospects in the face would be willing to relocate to another country. The bars and dots show the share of people in each region who answer that they would like to move to another country, in answer to the question: “Ideally, if you had the opportunity, would you like to move permanently to another country, or would you prefer to continue living in this country?” The bars are for the year 2009; the dots are for 2016. Thus, for regions of the world other than North America, Southern Asia, and Southeastern Asia, share of people who would be willing to move if they had a chance is typically more than 15-20%. 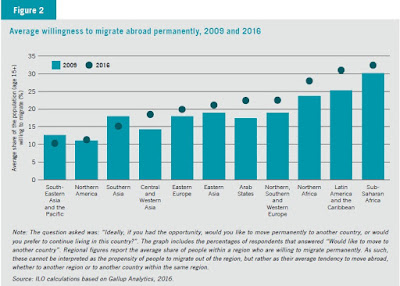