Agriculture in countries across sub-Saharan Africa is a large share of GDP, but a much larger share of jobs for many of the poorest people, in an economic context of widespread malnutrition. The OECD‑FAO Agricultural Outlook 2016‑2025 devotes a chapter to "Agriculture in Sub-Saharan Africa: Prospects and challenges for the next decade." Here are some basic facts:


"The Sub-Saharan Africa (SSA) region accounts for more than 950 million people, approximately 13% of the global population. By 2050, this share is projected to increase to almost 22% or 2.1 billion. Undernourishment has been a long-standing challenge, with uneven progress across the region. Despite being reduced from 33% in 1990-92 to 23% in 2014-16, the percentage of undernourishment remains the highest among developing regions. Owing to rapid population growth of 2.7% p.a. over the same period, the absolute number of undernourished people has increased by 44 million to reach 218 million. ...

"The high contribution of the agricultural sector to GDP also underlines the limited diversification of most African economies. On average, agriculture contributes 15% of total GDP, however it ranges from below 3% in Botswana and South Africa to more than 50% in Chad ... Agriculture employs more than half of the total labour force and within the rural population, provides a livelihood for multitudes of small-scale producers. Smallholder farms constitute approximately 80% of all farms in SSA and employ about 175 million people directly. ... [R]ecent surveys suggest that agriculture is also the primary source of livelihood for 10% to 25% of urban households."

Economic development typically involves a process of rising productivity in agriculture, along with a shift to producing not just commodity products, but products with higher value-added. How might that process be encouraged and facilitated across sub-Saharan Africa? The report has lots of detail on specifics of cereals, pulses, fruits, livestock, dairy, fish, and so on. Here are some of the broader insights:

Output of agriculture in sub-Saharan Africa has more than doubled in the last 25 years. 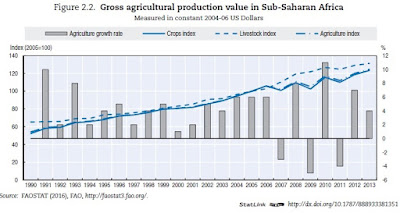 However, "[p]roduction growth in SSA has failed to keep pace with demand deriving from population and income growth, resulting in rising imports for food commodities such as wheat, rice and poultry. In many instances, import tariffs have been employed to support domestic producers, particularly relative to other producers outside the region."

In the past, output growth in African agriculture has tended to be driven by more land and more intense cropping, not by improvements in productivity or mechanisation.


"The African model of agricultural growth differed significantly from that of Asia or South America. In Asia, growth was driven largely by intensification, whereas in South America, it was the result of significant improvement in labour productivity arising from mechanisation. By contrast, strong growth in SSA agricultural output has accrued predominantly from area expansion and intensification of cropping systems, as opposed to large-scale improvement in productivity. ,,, [P]roductivity per agricultural worker has improved by a factor of only 1.6 in Africa over the past 30 years, compared to 2.5 in Asia."

However, future major expansions in agricultural land seem unlikely. "Much of the underutilised land is concentrated in relatively few countries and between one half and two thirds of surplus land is currently under forest cover. Conversion of such forest land to agriculture would come at considerable environmental cost." Thus, the projections for the next decade show only  modest rise in agricultural land. More intensive cropping on that land has natural limits, too. 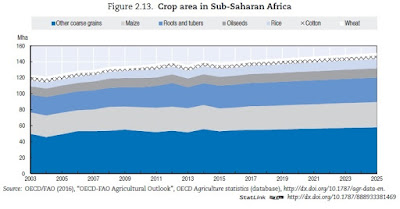 What are some of the main priorities that could help African agriculture to evolve in the direction of higher productivity and higher value-added?


"[A]n important uncertainty that will have a far ranging impact on production practices and productivity growth is the extent of concentration of agricultural land, which in turn will also be influenced by land tenure policies. Increasing concentration and commercialisation of medium-scale farmers could accelerate the rate of technology adoption, which has been fairly slow to date. Efficiency gains by a growing number of small, medium and large-scale farms linked into vertically integrated value chain with greater opportunity for access to credit, technology, extension services and off-take agreements, could have a meaningful impact on output levels in the coming decade. Commensurate development of upstream and downstream food sectors could increase the opportunities for non-farm income, which may in turn provide relatively productive small-scale producers with the capital to break through the barriers of subsistence agriculture into more commercialised medium-scale stature. ...

"Arguably the greatest challenge facing the agricultural sector in SSA is weak infrastructure including transportation networks, access to energy, irrigation systems and stockholding facilities. Poor transportation networks limit access to markets, often exacerbate high levels of post-harvest losses and also inhibit efficient distribution of inputs such as seed and fertiliser. At the same time, it is an underlying factor in high food prices, as it raises the cost of both inputs and imported food products. Substantial differences in price levels between surplus and deficit regions suggest that investments able to reduce the cost of transportation would hold significant benefits to producers and consumers alike."

This chapter mentions issues like investing in agricultural research and development as well, but the main priorities emphasized are these issues of infrastructure, property rights, and production chains.

The enormous population boom coming in sub-Saharan Africa in the next several decades is one of those unseen demographic earthquakes that is going to shake up the world economy in all kinds of ways. For example, there will be enormous economic pressures for migration to the relatively nearby countries of the European Union.  The evolution of Africa's agriculture sector will play a major role in shaping the characteristics and consequences of its population boom.