The Smile Curve: The Distribution of Benefits from Global Value Chains

Global value chains have been on the rise. Roughly one-third of international trade is "traditional" trade, in which all of production happens in one country and all of consumption happens in another. About two-thirds is either a "simple" global value chain, in which "value added crosses national borders only once during the production process, with no indirect exports via third countries or re-exports or re-imports" or a "complex" global value chain, in which the value-added crosses national borders at least twice. The Global Value Chain Development Report 2017, which has the theme of "Measuring and Analyzing the Impact of GVCs on Economic Development," explores these issues and others. The report is published a stew of groups, with participants from the World Bank Group, the Institute of Developing Economies, the Organisation for Economic Co-operation and Development, the Research Center of Global Value Chains headquartered at the University of International Business and Economics, and the World Trade Organization. It consists of an "Executive Summary" by David Dollar followed by eight chapters written by various contributors.

Here, I want to focus on some discussion from the report about how the benefits of global value chains are distributed, and the idea of the "smile curve." Consider a value-added chain which starts off with the production of new technology and high-tech components. These parts are then combined with other lower-tech inputs, like pieces of molded plastic and small flashing lights, during a manufacturing process. Finally, the finished product is marketed and sold to consumers, together with certain kinds of after-sales servicing. The "smile curve argument is that as most of the economic gain from this global supply curve is collected at the front end (new technology and high-tech components) and at the back end (marketing and sales), with less of the economic gain collected in the middle stages (lower-tech components and manufacturing).

Here's an explanation from David Dollar in the "Executive Summary." He is describing a specific example of exports from  China's electrical and optical equipment in 1995 and again in 2009. The points on the graph show where where the process is happening (country name) and the specific industry involved (the number after the country name). Dollar explains:

"The vertical axis plots labor compensation per hour in the country-sector, indicating high- versus low-value-added activities. The horizontal axis plots the total forward linkage–based production length between global consumers of electrical and optical equipment and a specific participating industry in the corresponding GVC. 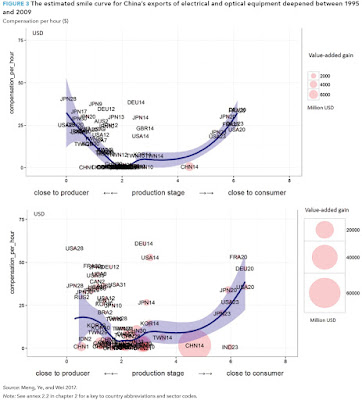 "The logic of the smile shape is as follows. Research and design activities for critical components of the electrical and optical equipment occur early in the production process (left side of the figure). These knowledge activities tend to be high-value-added activities in GVCs and tend to be carried out in more advanced economies. For example, in the 1995 curve Japan and the United States (JPN28 and USA28) are in the upper left corner, reflecting the high-value-added contributions from these two countries’ financial services sector. The Chinese industry that manufactures the good, Chinese electrical and optical (CHN14), is at the bottom point of the curve, reflecting assembly activity at low wages. The activities closest to the consumer are marketing, logistics, and after-product servicing.

"These market knowledge industries are also high value added, as shown by the upward-sloping part of the smile curve on the right. And they tend to be carried out in advanced economies, where the mass consumption products are eventually purchased by households. The comparison of the same country-sector export in 1995  and 2009 reveals that the smile curve for this product has deepened. Compensation in the USA28 industry rose from about $25 an hour to $60 an hour, whereas Chinese wages remained very low on the smile curve. But the bubble that shows the total value added produced by CHN14 expanded about 10-fold. China may have held a low position in the value chain throughout this period, but it brought a huge number of workers from its impoverished countryside to work in the related factories.

"Figure 3 captures anxieties felt by both rich and poor countries in contemplating contemporary trade. Rich-country electorates worry that manufacturing is being hollowed out—that is, that semiskilled production jobs have moved to developing countries or, to the extent that such jobs still remain in advanced economies, have suffered downward pressure on wages. Poor countries worry that they are trapped in low-value-added activities and are locked out of the higher value-added activities in
design, key technological inputs, and marketing."

Dollar draws some implications for  who benefits within a given economy from participation in global value chains. He writes:


"These findings do not permit drawing strong causal conclusions, but the analysis is consistent with a story in which the benefits from GVC-related trade have been distributed highly unevenly. For the United States the big winners appear to be high-skilled workers and multinational corporations. GVCs have enabled them to benefit from enormous productivity gains in developing countries such as China. Ordinary workers in the United States have not seen much (if any) benefit. In China ordinary workers have benefited. Even at the beginning of the period factory wages in China were far ahead of rural incomes. And those wages doubled over 15 years. The wage gains are a driving factor behind the impressive decline of absolute poverty in China. Relatively speaking, however, the big benefits in China accrued to the small number of high-skilled workers and to the owners of capital, including foreign investors. ...

"[I]n developing countries deeply involved in GVCs, virtually the entire population benefits from the expanded trade and faster growth, though not all to the same extent. In developed countries, by contrast, the benefits of expanded international trade and investment are highly concentrated among the very skilled in the workforce and the owners of capital. Both groups are already high up in the income distribution, and globalization increases their share of the pie."

For developing countries and emerging markets, global value chains offer an enormous opportunity. Such countries can now just become involved in a piece of the production chain, without needing to produce all of a finished product domestically, before being able to participate in world trade. Dollar cites evidence that the emerging market economies that participate in  global value chains tend to have faster growth.

But again, cause and effect are not simple to disentangle here. Countries that participate in global value chains have the physical, legal, and regulatory infrastructure that enables not just imports an exports, but also flows of financial capital and enforceable contracts--which are factors that should tend to boost prosperity, too. As Dollar notes: For the involvement of developing countries in GVCs, geography clearly matters. The world seems to have three interconnected production hubs for the extensive trade in parts and components: one centered on the United States, one on Asia (China, Japan, Republic of Korea), and one on Europe (especially Germany)."

For advanced economies, given that the gains from global value chains accrue mainly to high-income workers and investors of capital, they may seem of less importance. However, if US firms did not have access to global value chains, they will find it harder to compete in global markets with firms from other countries that do. In addition, I am not someone who opposes to higher income for skilled workers or capital investors (which after all, includes my retirement account as well as pension funds and life insurance companies). I would just prefer to see some additional steps taken toward redistribution of some of that income toward policies that would benefit others across the rest of society.
Posted by Timothy Taylor at 8:00 AM