The Next Inflection Point for Aging and Social Security

It was apparent back in the 1970s that something needed to be done about Social Security. A presidential commission under Alan Greenspan proposed a combination of phased-in tax increases and benefit cuts that were enacted into law in 1983. The changes were sufficient so that the date at which the Social Security trust fund would run out of money was moved back from 1983 (!) into the 2030s.  My purpose here is neither to praise nor to critique that report and legislation from more than three decades ago. It is to point out that the 2030s are a lot more visible in the headlights now than they were back in 1983, and we need one more round of legislation to assure that Social Security will remain solvent.

A few figures from the  the 2017 Annual Report of the Board of Trustees of the Federal Old-Age and Survivors Insurance and Federal Disability Insurance Trust Funds  (released July 13, 2017), tell much of the underlying story. The figure shows expenditures and costs. One result of the legislation following the Greenspan commission report was that for several decades Social Security was collecting more in taxes than it paid out in benefits, with the surpluses being invested in US Treasury debt and deposited in a trust fund. But back in 2009, the trust fund started to diminish, instead of to increase. Up through 2034, on the current projections, annual benefits paid out can be larger than the annual income of the system, because of the trust fund. But in 2034, the trust fund runs out, and the annual income of the system would be 77% benefits that have been promised. 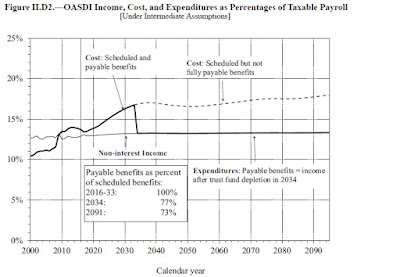 Underlying this fiscal shift are the demographic patterns that affect the number of working-age people and retirees in the US economy. This figure shows the ratio of the number of workers paying into Social Security divided by the number of beneficiaries. Back in the 1980s, 1990s, and early 2000s, the ratio was more than 3:1. But one of the most predictable (and commonly predicted!) demographic shifts in US history started happening around 2010. The front end of the baby boomer generation, those born from 1946 through the early 1960s, turned 65 years of age in 2010. The ratio of workers paying in divided by beneficiaries falls from well above 3 as late as 2007 to nearly 2 by 2030. In the timelines that commonly apply to demographic shifts, this is a very shift in a relativley short time. 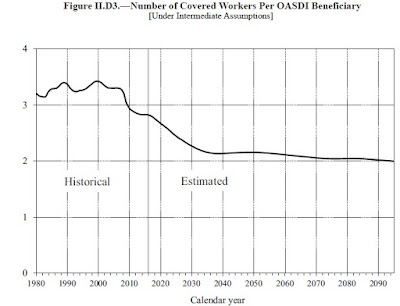 But along with the obvious bad news for the finances of the Social Security system, there's an aspect of good news here as well. The big demographic shift of the retiring boomers will be pretty much over by the mid-2030s. As the first figure shows, costs are 77% of projected income in 2030, and 73% of projected income in 2091--much the same. As the second figure shows, the ratio of contributing workers to beneficiaries falls to roughly 2:1, but then stays sags only a bit more by the end of the 21st century. Given that the overall fiscal and demographic balance of the system doesn't change much after about 2035, it is technically possible to put into place one big fix of changes that would bring the system into fiscal balance (minor future tweaks excepted) for the rest of the 21st century.

What would it take to close the gap? Conveniently, the Social Security Administration publishes a "Summary of Provisions that Would Change the Social Security System" (most recent version, February 28, 2017). It lists dozens of proposals, many of them just variations on the timing and size of the change, and for each proposal, it lists what percentage of the long-range short-fall (that is, over the next 75 years) would be eliminated by this specific change. It's not really kosher just to add together the estimates about individual proposals to get an estimate of the combining several of the proposals, because the changes would overlap or interact in certain ways that could diminish or increase their effects. But for back-of-the-envelope estimates--and just getting a sense of what changes would matter a lot and what changes wouldn't matter so much--no great harm is done by listing some specific estimates. Without pre-judging the merits, here's a selection of some possible changes.

Under current law, Social Security benefits are adjusted upward each year according to the rise in the Consumer Price Index. For example, if instead the cost-of-living adjustment was 0.5 percentage points lower each year (starting in December 2017), this step would eliminates 34% of the long-run actuarial imbalance.

Under current law, Social Security benefits are calculates by looking at average earnings over the highest 35 years of earnings, which are expressed as a statistic called AIME, or "average indexed monthly earnings." Then a formula is applied to AIME to calculate the PIA, or "primary insurance amount," which is the basis for benefits paid.  A higher AIME generally leads to a higher PIA, but the relationship isn't a simple proportion; instead, there's an element of redistribution in which those with lower AIME get a higher share of their income replaced by Social Security benefits. One could adjust how AIME is calculated, or adjust the PIA formula in many ways.

For example, one proposal is to "increase the number of years used to calculate benefits for retirees and survivors (but not for disabled workers) from 35 to 40, phased in over the years 2017-2025," which would address 17% of the long-range actuarial imbalance. However, there are lots of ways of tweaking the PIA formula. For example, one can tweak the formula so there is a benefit cut only for those with higher AIME, and so that the change doesn't start right away. For example, one such proposal would "create a new bend point at the 30th percentile of the AIME distribution of newly retired workers. Maintain current-law benefits for earners at the 30th percentile and below. Reduce the 32 and 15 percent factors above the 30th percentile such that the initial benefit for a worker with AIME equal to the taxable maximum is reduced by 1.21 percent per year as compared to current law (for the years that progressive indexing applies)." This step would eliminate 53% of the the long-run actuarial imbalance.

Under current law, there is a "normal retirement age" for Social Security, although retirees have an option to retire earlier and receive lower benefits, or to retire later and receive higher benefits. The Greenspan commission recommendations, have already been phasing in a later "normal retirement age," and as life expectancies continue to rise, this change could be extended. For example, one proposal would be that "after the normal retirement age (NRA) reaches 67 for those age 62 in 2022, increase the NRA 2 months per year until it reaches 69 for individuals attaining age 62 in 2034. Thereafter, increase the NRA 1 month every 2 years." This change would eliminate 40% of the actuarial imbalance.

An alternative proposal in this category would be to apply Social Security taxes to the value of employer-provided health insurance,which is currently an untaxed fringe benefit for some workers --but not others. A sample proposal sounds like this: "Expand covered earnings to include employer and employee premiums for employer-sponsored group health insurance (ESI). Starting in 2020, phase out the OASDI payroll tax exclusion for ESI premiums. Set an exclusion level at the 75th percentile of premium distribution in 2020, with amounts above that subject to the payroll tax. Reduce the exclusion level each year by 10 percent of the 2020 exclusion level until fully eliminated in 2030. Eliminate the excise tax on ESI premiums scheduled to begin in 2020." This step would eliminate 33% of the long-run actuarial imbalance.

As long as we are tinkering with tax and benefit rates, some steps might be taken to help those with the lowest incomes who depend most heavily on Social Security. For example, there are a variety of proposals for raising the minimum benefit, which would tend to worsen the long-run actuarial imbalance by about 5%. A related idea is to offer an increase in minimum benefits for the very old, who have been receiving Social Security for at least 20 years, on the ground that this group is especially likely to be in need. Another option would "increase the earliest eligibility age (EEA) by two months per year for those age 62 starting in 2018 and ending in 2035 (EEA reaches 65 for those age 62 in 2035)," so that people who have economic or health-related reasons to claim benefits earlier could do so--although the level of benefits would be reduced for those who took this option. One could also tinker with the formulas to provide a boost for elderly workers who remain active in the workforce. For example, one proposal would eliminate Social Security taxes for those who have worked more than 180 quarters (that is, 45 years).

Thus, if thinking of an overall big deal on Social Security, it makes sense to take steps that would address, say, 120% of the long-run actuarial imbalance, and then "spend" 20% of that amount on targeted increases in Social Security benefits for the most needy.

At least for geeks like me, innocent as a rose of real-world political machinations, it appears that a political opportunity lurks here! What if the remaining practical politicians in one party or the other could hammer out a plausible bill to fix Social Security for the 21st century, which would offer some  mixture of all these policies.

Of course,  whatever party wants to take this on would need to keep its own extremists in check. In my experience, Republican extremists on this issue sometimes insist on trying to address the entire problem with benefit cuts, or on turning this into a fight over whether to privatize Social Security. Meanwhile, Democratic extremists on this issue sometimes want to disregard the projections of the Social Security actuaries, argue that the problem isn't real, and then offer large and broad increases in benefits. I'm not saying it's an easy problem--although compared to North Korea or rising health care costs, I don't think Social Security is an especially hard problem. And think of the potential political gains from being the party that got its act together and saved Social Security for the 21st century!