Will the China Shock Operate in Reverse?

Everyone knows that China's economy has had explosive economic growth in recent decades, with tidal effects through the rest of the global economy. In fact, China's economy has come so far and so fast that some of the main shocks it has caused in recent decades may be about to move into reverse. At least, that is the provocative thesis of Charles Goodhart and Manoj Pradhan in "Demographics will reverse three multi-decade global trends," written as Bank of International Settlements Working Paper No 656 (August 2017). They write:


"The global economy over the last 35 years has experienced three significant trends; a decline in real interest rates (supporting asset prices), a drop in real labour earnings in advanced economies (AEs), and, perhaps most startling of them all, a meteoric rise in inequality within countries alongside a drop in inequality between them. All three trends have been researched extensively, but individually, locally and independently from one another. We argue that such an analysis is the wrong approach. Instead, we believe all three trends need to be examined together in a global context. Specifically, we argue that demographic developments over the last 35 years have driven falling real interest rates, inflation and wages, and rising inequality within countries as well as some of the falling inequality between AEs and emerging market economies (EMEs). Can demographics really explain all three trends? If we include the integration of the gigantic labour forces of China and eastern Europe into the global economy, then global demographic dynamics do help to explain all three trends. But if that is correct, then the demographic reversal that the global economy will witness over the coming decades will also reverse the fall in real interest rates and inflation, while inequality will fall."

It's useful to spell out these connections in more detail. As just noted, they include both China and eastern Europe as central parts of their explanation, although China plays a bigger role. The argument rests on two sets of interrelated changes in global labor and capital markets. 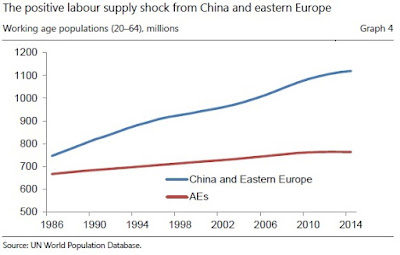 In addition, China in particular has had extraordinarily high rates of saving in the last few decades, and the greater supply has helped to drive real interest rates lower. But China's population is now aging, and countries that are on average older tend to save less, while spending more on consumption among the elderly. Thus, the shock to global financial markets from China's high saving rate is about to run in reverse, too. Here's a figure on how the working-age share of the population is already in decline in high-income economies, and is soon to level off and decline a bit in emerging markets. 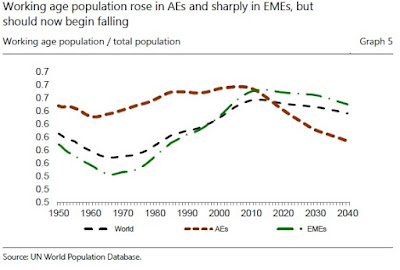 Goodhard and Pradhan explain the dynamics in this way:


"China has played a well known role in lowering global real interest rates. Its share of world trade (an average of exports plus imports) increased from slightly less than 2% in 1990 to almost 12% by end-2014. The asymmetric integration of China into the world economy is what really affected these dynamics. China’s economic markets joined the global economy, but its financial markets did not. China’s labour force joined the global economy with a capital/labour ratio that was well below global standards, but its financial border was closed, thus allowing its domestic real interest rate to remain very low in order to drive capital accumulation at home. Imposing strict capital controls and pegging the currency allowed monetary policy to remain extraordinarily easy for a long time in order to maximise internal growth. As a result, there was a shift of overall investment out of the rest of the world and into China. Furthermore, the savings ratio was boosted in China through corporate/state-owned enterprises (SOEs) and household savings, especially owing to the lack of a social safety net and the collapse of the family safety net as the “one child” policy took hold. Thus, despite an already high investment ratio, the savings ratio climbed even higher, creating a savings glut that channelled back into the US Treasury bond market. On both counts, real interest rates outside China fell as ex ante investment fell relative to ex ante savings.

"And then there was eastern Europe. Over a similar time span, communism collapsed in the USSR and eastern Europe. As in China’s economy, prior to the fall of communism and their subsequent participation in the global economy, these countries had been more or less isolated. In these countries, labour was abundant and quite well educated, but capital and management were limited. A fruitful combination ensued: the West supplied much of the management, while the East supplied the labour. The numbers associated with this integration are staggering. Counting just the potential workforce, the working population in China and eastern Europe (aged 20–64) was 820 million in 1990 and 1,120 million in 2014, whereas the available working population in the industrialised countries was 685 million in 1990 and 763 million in 2014 (Graph 4). That represents a one-time increase of 120% in the workforce available for global production."

The authors readily admit that their proposition, especially the part about how real interest rates are likely to rise in the future, is controversial. Basically, they argue that both savings and investment will fall in China as the population ages, but that the decline in savings will be substantially bigger than the decline in investment--which is where the controversy arises. They argue:


"Everything about China is enormous; its demographic dynamics have been and remain remarkable, and the consequential movements in its savings and investment ratios have been extraordinary. As China’s labour force dynamics change direction, the savings-investment balance within and even outside China will change as a result. Demographics will ensure that China’s extraordinary savings will fall. Prior to modern times, the (relatively few) old in China were cared for in the extended family. But the one-child policy, extended for too long, has meant that support has gotten more and more scarce for the aged. With an insufficient social safety net, personal savings rose to plan for retirement. Add to this the incentive on the managers of state-owned enterprises to retain, rather than pay out, profits, and the explanation of these extraordinary savings ratios becomes clearer. ...

"The economic impact of China on the world economy has been great. One dimension of this has been to impart upward pressure on the price of raw materials including, notably, oil. Much oil has been produced in relatively sparsely populated countries (Saudi Arabia and the Gulf and Norway). With China’s growth declining, and with the need to shift from fossil fuels to renewables, the net savings and current account surpluses of the petro-currency countries are likely to erode...."

At least for me, the Goodhart-Pradhan argument falls into the category of plausible speculation. For some qualifications and alternative speculations, I commend the accompanying comments on the paper by Masaaki Shirakawa and Alan Auerbach. But in the bigger picture, if you are concerned some of the consequences of how China's pattern of economic growth has affected the US and the global economy, it's useful to be aware that China's growth has moved so quickly that its economic patterns in the next 20 years are likely to be quite a bit different than in the previous 20 years, and the consequences in China and elsewhere will differ, too.

Final note: The Goodhart-Pradhan paper was presented as part of the 15th BIS Annual Conference, held in Lucerne, Switzerland, on June 24, 2016. For those who are interested, here's the full list of papers and comments, with links:

World changes in inequality: an overview of facts, causes, consequences and policies, BIS Working Papers No 654
by François Bourguignon
Comments by Barry Eichengreen and Raquel Fernández