It seems clear that driverless vehicles are coming, although the timeline for their arrival remains unclear. David Beede, Regina Powers and Cassandra Ingram of the Economics and Statistics Administration at the US Department of Commerce look at one aspect, "The Employment Impact of Autonomous Vehicles," in ESA Issue Brief #05-17 (August 11, 2017). They set the stage this way:

"In September 2016, the U.S. Department of Transportation and the National Highway Traffic Safety Administration (NHTSA) published policy guidelines for AVs [autonomous vehicles], recognizing their potential as “the greatest personal transportation revolution since the popularization of the personal automobile nearly a century ago” (NHTSA 2016). ... The worldwide number of advanced driver-assistance systems (ADAS), such as backup cameras and adaptive cruise control, increased from 90 million to 140 million units between 2014 and 2016. Consumers have indicated a willingness to pay $500-$2,500 per vehicle for ADAS. Sensor technologies are rapidly advancing to provide sophisticated information to vehicle operating systems about the surrounding environment, such as road conditions and the location of other nearby vehicles. However, slower progress has been made in developing software that can mimic human driver decision-making, so that fully autonomous vehicles may not be introduced for another ten or more years ..."

Autonomous vehicles could lead to sweeping changes in personal mobility, car ownership, parking arrangements, traffic congestion, road safety, and more. I ran through some of the main effects in an earlier post on "Driverless Cars" (October 31, 2012).

The focus of Beede, Powers, and Ingram is on jobs that involve a substantial amount of driving. They write:

"In 2015, 15.5 million U.S. workers were employed in occupations that could be affected (to varying degrees) by the introduction of automated vehicles. This represents about one in nine workers. We divide these occupations into “motor vehicle operators” and “other on-the-job drivers.” Motor vehicle operators are occupations for which driving vehicles to transport persons and goods is a primary activity, are more likely to be displaced by AVs [autonomous vehicles] than other driving-related occupations. In 2015, there were 3.8 million workers in these occupations. These workers were predominately male, older, less educated, and compensated less than the typical worker. Motor vehicle operator jobs are most concentrated in the transportation and warehousing sector. Other on-the-job drivers use roadway motor vehicles to deliver services or to travel to work sites, such as first responders, construction trades, repair and installation, and personal home care aides. In 2015, there were 11.7 million workers in these occupations and they are mostly concentrated in construction, administrative and waste management, health care, and government. Other-on-the-job drivers may be more likely to benefit from greater productivity and better working conditions offered by AVs than motor vehicle operator occupations."

When they break down these jobs by industry, I was interested to note that "government" is the area where the greatest number of jobs will potentially be affected by driverless cars. This suggests that certain might play a leading role in offering examples of how driverless vehicles could work. Or not! 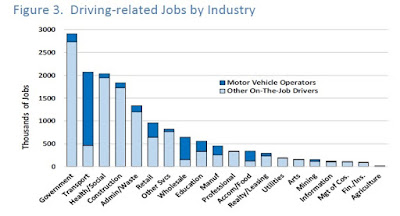 Many of those whose jobs would be affected by autonomous vehicles are likely to push back. When tallying up the costs and benefits, it's worth noting that those who spend a lot of time driving are actually in relatively hazardous jobs, because of the risk of motor vehicle accidents. "[T]he fatality rate (per 100,000 full-time equivalent workers) for motor vehicle operators from on-the-job roadway incidents involving motor vehicles is ten times the rate for all workers, and the numbers of roadway motor vehicle occupational injuries resulting in lost work time per 100,000 full-time equivalent workers is 8.7 times as large as that of all workers."

Any innovation which directly affects the jobs of about one-ninth of all US workers has the potential to be a dislocating shock of some force. Some  types of workers who spend a good portion of every day in a vehicle will have a harder time adjusting to the change; for others, autonomous vehicles may come as a relief, by freeing them up to focus on other parts of their job. The authors note:

"Workers in motor vehicle operator jobs are older, less educated, and for the most part have fewer transferable skills than other workers, especially the kinds of skills required for non-routine cognitive tasks. ... [I]n contrast to the workers in the occupations we classify as motor vehicle operators, other on-the-job drivers, of which there are about triple the number of motor vehicle operators, have a more diversified set of work activities, knowledge, and skills. For this group, although driving is an important work activity, it is only one of many important work activities, many of which already require the kinds of non-routine cognitive skills that are becoming increasingly in demand in our economy. Such workers are likely to be able to adapt to the widespread adoption of AVs."