The US Fiscal Outlook

Pretty much everyone agrees that the US fiscal outlook for the long-run--a few decades into the future--looks grim unless changes are made. Here's are estimates of the ratio of accumulated federal debt/GDP throughout US history, and projected up through 2050, from a Congressional Budget Office Report in March 2017. The spikes of government debt during wartime, the Great Depression, and the Reagan and Obama administrations are clear. The trajectory forecast would take US government debt outside past experience. 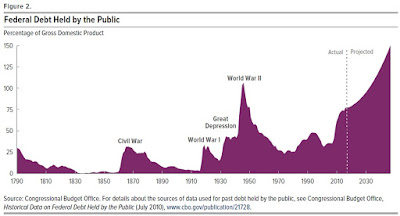 Alan J. Auerbach and William G. Gale set the stage for the discussion that needs to  happen in "The Fiscal Outlook In a Period of Policy Uncertainty," written for the Tax Policy Center (August 7, 2017). Douglas W. Elmendorf and Louise M. Sheiner also tackle these issues in "Federal Budget Policy with an Aging Population and Persistently Low Interest Rates," in the Summer 2017 issue of the Journal of Economic Perspectives (31: 3, pp. 175-194).

"Budget deficits appear manageable in the short run, but the nation’s debt-GDP ratio is already high relative to historical norms, and even under optimistic assumptions,  both measures will rise in the future. Sustained deficits and rising federal debt will crowd out  future investment, reduce prospects for economic growth, and impose burdens on future generations. ...

"For example, we find that just to ensure that the debt-GDP ratio in 2047 does not exceed the current level would require a combination of immediate and permanent spending cuts and/or tax increases totaling 3.2 percent of GDP. This represents about a 16 percent cut in non-interest spending or a 19 percent increase in tax revenues relative to current levels. To return the debt-GDP ratio in 2047 to 36 percent, its average in the 50 years preceding the Great Recession in 2007-9, would require immediate and permanent spending cuts or tax increases of 4.6 percent of GDP. The longer policy makers wait to institute fiscal adjustments, the larger those adjustments would have to be to reach a given debt-GDP ratio target in a given year. While the numbers above are projections, not predictions, they nonetheless constitute the fiscal backdrop against which potentially ambitious new tax and spending proposals should be considered."

Auerbach and Gale go through a variety of ways of projecting future deficits, but the overall message that there is a long-run reason for concern keeps coming through. They also offer a useful reminder that even if the proximate cause of the higher federal debt burden is projections for higher spending on entitlement and especially health programs, there are a number of cases in addressing a problem by reversing its cause doesn't make sense. As I sometimes say, "When someone is hit by a car, you don't fix their injury by reversing the cause--that is, backing up the car over their body." As Auerbach and Gale write:

"Looking toward policy solutions, it is useful to emphasize that even if the main driver of long-term fiscal imbalances is the growth of entitlement benefits, this does not mean that the only solutions are some combination of benefit cuts now and benefit cuts in the future. For example, when budget surpluses began to emerge in the late 1990s, President Clinton devised a plan to use the funds to “Save Social Security First.” Without judging the merits of that particular plan, our point is that Clinton recognized that Social Security faced long-term shortfalls and, rather than ignoring those shortfalls, aimed to address the problem in a way that went beyond simply cutting benefits. A more general point is that addressing entitlement funding imbalances can be justified precisely because one wants to preserve and enhance the programs, not just because one might want to reduce the size of the programs. Likewise, addressing these imbalances may involve reforming the structure of other spending, raising or restructuring revenues, or creating new programs, as well as simply cutting existing benefits. Nor do spending cuts or tax changes need to be across the board. Policy makers should make choices among programs. For example, more investment in infrastructure or children’s programs could be provided, even in the context of overall spending reductions."

Elmendorf and Sheiner tackle a different aspect of the same question. They agree that federal deficits are on "an unsustainable path." However, they also note that interest rates are very low, which offers an opportunity for federal borrowing aimed at infrastructure and long-run investments. They write:

"Both market readings and detailed analyses by a number of researchers suggest that Treasury interest rates are likely to remain well below their historical norms for years to come, which represents a sea change for budget policy. We argue that many—though not all—of the factors that may be contributing to the historically low level of interest rates imply that both federal debt and federal investment should be substantially larger than they would be otherwise. We conclude that, although significant policy changes to reduce federal budget deficits ultimately will be needed, they do not have to be implemented right away. Instead, the focus of federal budget policy over the coming decade should be to increase federal investment while enacting changes in federal spending and taxes that will reduce deficits gradually over time."

As a focused argument in economic reasoning, Elmendorf and Sheiner make a strong case. As a matter of political economy, it's trickier, because one can raise at least three questions.

1) If the US political system decides not to focus on deficit-reduction now, is it capable of focusing the additional spending on investment that will raise long-run growth, or will the additional budget flexibility just lead to more transfer payments?

2) If the US political system doesn't focus on deficit reduction in the near-term, then in the medium-term roughly a decade from now, it will need to preside over even greater budget changes (as Auerbach and Gale explain) to avoid the outcome that everyone agrees is unsustainable. It would be a hard political U-turn to shift from larger deficits for investment in the present, to taking budgetary steps in the fugure that will offset that additional borrowing, and more besides, in the future.

3) The theoretical case for enacting changes now that will have the effect of holding down the increase in deficits in the long-run is strong. But in practical terms, just what these changes should be is less clear. For example, Congress could pass a law which places limits on, say, the level of government health care spending from 2030 to 2040, but there's no reason to believe that those limits will have any actual force when those years arrive. There are a few changes, like phasing in an older retirement age or a change in benefit formulas for Social Security, that might have a better chance of persisting. It seems useful to think more about about budgetary policies that could be enacted in the present, but would have most of their effect after a long-term phase-in, and would be relatively resistant to future political tinkering.

It's not exactly news that democratic political systems are continually enticed to focus on the present and push costs into the future in a wide range of contexts: public borrowing, pensions, environment, and others.

Posted by Timothy Taylor at 8:46 AM