It's clear that extracting oil and gas from shale formations has led to an economic boom in North Dakota. But what is a plausible estimate of how it will affect the U.S. economy as a whole? The Congressional Budget Office addresses this question in "The Economic and Budgetary Effects of Producing Oil and Natural Gas From Shale" (December 2014). To set the stage for their findings, it's useful to remember three points.

1) The amount of energy used relative to GDP has been declining in the U.S. for decades, with the ongoing shift to an economy where the role for services is relatively larger compared to manufacturing. Here's a figure showing energy consumption relative to GDP, with the ratio in 1950 set equal to 1.0. You can see that even in the last couple of decades, since about 1990, the ratio has fallen by about one-third (from .6 to .4). And the projections are that in the next few decades, the ratio will fall by almost another 50% (from .4 to .2).  When energy is less important to an economy, it follows that cheaper and more available energy has less of an effect. 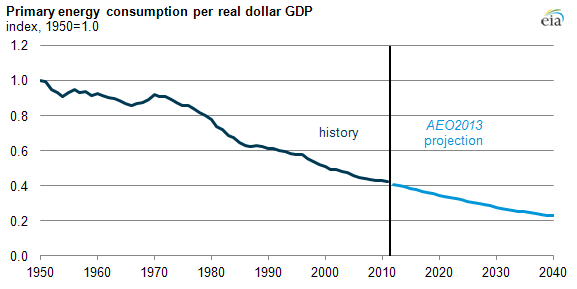 2) Oil prices are set in a global market, because oil is transported fairly easily around the world. Thus, any effect of additional U.S. oil production on prices is relatively mild, because it is spread over the global economy. However, natural gas is not transported easily all around the world, and won't be without some major infrastructure investments. So additional U.S. production of natural gas can have a more substantial effect on natural gas prices in the U.S. over the next few decades.

3) When thinking about how shale oil and gas benefit the economy over the long-term, you can't just look at revenues from these products or jobs in these areas. Over the long run, more investment in this area is offset to some extent by less investment in other areas (both in energy and in other industries), and more workers in this area are offset to some extent by fewer workers in other areas.
With the US. economy in or recovering from recession in the last six years, the investment and job-creation benefits of additional energy have been especially important, because they are a bright spot in an economy with a lot of slack. Over the longer term, the broader gains from shale oil and gas across the economy arise from a reallocation of labor and capital toward more productive uses. This includes not just those actually drilling for oil and gas, but all the downstream effects of, say, electrical utilities and manufacturing companies that can benefit from lower natural gas prices.

Taken as a group, these points suggest that the economic effects of shale oil and gas on the U.S. economy are real and positive, but perhaps less than some commentators may be implying


Recent advances in combining two drilling techniques, hydraulic fracturing and horizontal drilling, have allowed access to large deposits of shale resources—that is, crude oil and natural gas trapped in shale and certain other dense rock formations. ... Virtually nonexistent a decade ago, the development of shale resources has boomed in the United States, producing about 3.5 million barrels of tight oil per day and about 9.5 trillion cubic feet (Tcf ) of shale gas per year. Those amounts equal about 30 percent of U.S. production of liquid fuels (which include crude oil, biofuels, and natural gas liquids) and 40 percent of U.S. production of natural gas.

Here's a figure showing overall U.S. production and consumption of natural gas and "liquid" fuels like oil. As you can see, the projections are that the U.S. will be producing more natural gas than it consumes in the near future, but will continue to consume more oil than it produces. Given the current high costs of shipping natural gas outside of North America, it makes some sense (on both economic and environmental grounds) to find ways to expand use of natural gas for electricity generation and manufacturing in place of oil or coal--and indeed, such a shift is already taking place. 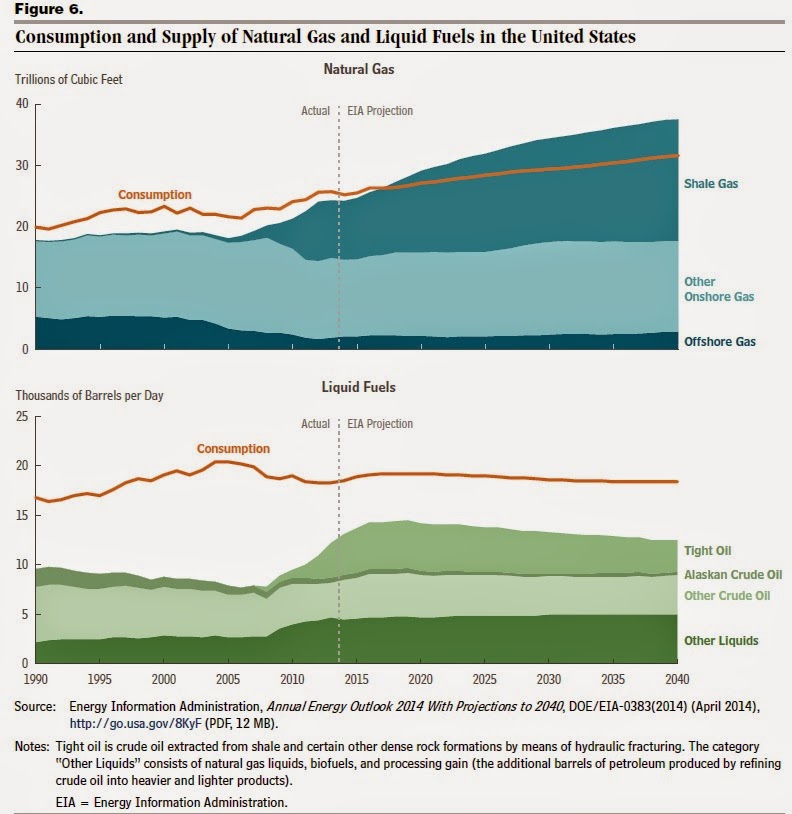 The CBO report looks at economic gains from shale oil and gas in the short run, and the long run.  In the short-run, it lists the following.

Increased Output of Oil and Gas. Shale development has increased U.S. output of tight oil and shale gas, raising GDP. The market value of shale gas produced in 2013 (reflecting the contributions of both the gas industry and the other industries that supply goods and services used to produce shale gas) was about $35 billion. In the same
year, the market value of tight oil, including natural gas plant liquids produced by hydraulic fracturing, was about $160 billion. Combined, sales of shale gas and tight oil therefore totaled about $195 billion, or roughly 1.2 percent of GDP.

Increased Investment in the Oil and Gas Industry and in Supporting Industries. Shale development has probably raised GDP in recent years through greater spending on the development of new wells. Between 2004 and 2012, investment in the oil and gas extraction industry increased from 0.4 percent of GDP to 0.9 percent. ...

Increased Investment and Production in Other Industries. Industries that use natural gas intensively—such as the steel, petrochemical, fertilizer, and electricity industries—have expanded production to take advantage of energy prices that are lower than they would have been without shale development.  ...

Increased Demand. Higher employment resulting from shale development, along with a larger capital stock resulting from increased investment in the development and use of shale resources, has led to higher household income and thus greater demand for goods and services. Some of that increased demand has been met by the additional production from the energy-intensive industries described above. However, much of the increase has been for products supplied by firms that do not directly benefit from lower natural gas and oil prices. In order to meet the increased demand, those firms have increased employment and investment, which has raised GDP still further in the short term.

What about economic benefits in the longer run? Here's a sample of the CBO analysis:

Shale development will raise GDP in the longer term in two ways: increasing the productivity of existing labor and capital, and increasing the amount of labor and capital in use. CBO estimates that, as a result, real GDP will be 0.7 percent higher in 2020 and 0.9 percent higher in 2040 than it would have been without shale development, although those estimates are subject to considerable uncertainty. The longer-term effects of shale development on GDP will probably be smaller than the near-term effects described above ...

Shale development raises GDP by increasing the productivity of labor and capital. That increased productivity is projected to make GDP  0.4 percent higher in 2020 and 0.5 percent higher in 2040 than it would have been in the absence of shale development. ... CBO estimates that the value of the tight oil and shale gas produced in both 2020 and 2040 will be about 1.3 percent of real GDP. But in the absence of hydraulic fracturing and horizontal drilling, CBO estimates, the labor and capital now projected to be used
to produce that output would contribute only about 1.0 percent to GDP in 2020 and about 0.9 percent in 2040. The boost to GDP from reallocating labor and capital into the production of tight oil and shale gas is the difference between those estimates: about 0.3 percent of GDP in 2020 and 0.4 percent in 2040. ...

The rest of the increased productivity comes from labor and capital that are used more efficiently elsewhere in the economy because of increased consumption of oil and
gas. As energy-intensive products and methods of production grow cheaper, the same amount of output can be produced with less labor and capital. For example, as the cost of generating electricity from gas has fallen, some electric utilities have increased their productivity by switching from coal to gas. Through such shifts, GDP will be about 0.1 percent higher in both 2020 and 2040 than it would have been without shale development, CBO estimates. ...

Shale development will also raise GDP by increasing the amounts of labor and capital used in the economy, in CBO’s assessment. That increase will happen in at least two ways. First, the increase in output generated by higher productivity that was described above will result in additional income; part of that income will be saved and then invested, increasing the capital stock. Second, the higher productivity will increase wages, improving the return to workers from each hour of work and encouraging them to work more. Because of those effects, CBO estimates, GDP will be 0.3 percent higher in 2020 and about 0.4 percent higher in 2040 than it would have been without shale
development. ...

Shale development confers an economic benefit that raises the standard of living in the
United States but does not show up as greater GDP. Specifically, increased net exports of natural gas and oil boost the value of the dollar, making imports cheaper and allowing consumers to buy more and businesses to invest more for a given quantity of exports and a given amount of GDP. CBO has not quantified that effect, however.


Reading about a gain of 0.7% of GDP, it's easy to feel a little disappointed or dismissive? All this fuss over 0.7%? Why bother? But to choose a convenient number, say that U.S. GDP is about $20 trillion in 2020. Then, 0.7% would be equal to $140 billion of economic gains. Shale oil and gas is no panacea for the long-run issues facing the U.S. economy, and America is in no way on a path to becoming a resource-dependent economy like Russia or Venezuela. But the U.S. economy is so enormous that no single industry is capable of making a huge difference, not all by itself. Instead, the future of the U.S. economy will need a number of key industries to step up--and it looks as if oil and gas drilling can be one of them.

P.S. In this post, I've not discussed the environmental issues involved with shale oil and gas. However, in previous posts I've argued that if certain "golden rules" of environmental protection are applied, the environmental benefits plausibly outweigh the costs. Indeed, I support what I call the "Drill Baby Carbon Tax," which would combine moving ahead on developing U.S. fossil fuel resources with all deliberate speed, but also imposing a tax to reduce emissions of carbon, as well as taking step to address other air pollutants and greenhouse gas issues.