James MacDonald and Doris Newton offer an example in "Milk Production Continues Shifting to Large-Scale Farms," which appears in the December 1, 2014 issue of Amber Waves, published by the U.S. Department of Agriculture. They point out that the number of small dairy farms is falling, while the number of large farms is rising:

Perhaps unsurprisingly, the main driver behind this change is that larger dairy herds can produce milk at a lower average cost. Here's the pattern from MacDonald and Newton. They write: "While some small farms earn profits and some large farms incur losses, financial performance is linked to herd size. Most of the largest dairy farms generate gross returns that exceed full costs, while most small and mid-size dairy farms do not earn enough to cover full costs. Full costs include annualized costs of capital as well as the cost of unpaid family labor (measured as what they could earn off the farm), in addition to cash operating expenses. ... In 2012, dairy farms with at least 2,000 cows incurred costs that were 16 percent lower, on average, than farms with 1,000-1,999 cows, a difference that could provide a spur to further structural change to even larger farms. In 1992, there were just 31 farms with 3,000 or more milk cows; by 2012, there were 440, and many of them had 5,000 or more cows."

The economies of scale in dairy farms is just one example of larger scale in U.S. agriculture as a whole. Daniel A. Sumner explores this topic in "American Farms Keep Growing: Size, Production, and Policy," in the Winter 2014 issue of the Journal of Economic Perspectives. (Full disclosure: I've been Managing Editor of the JEP since the first issue in 1987. All JEP articles back to the first issue are freely available online courtesy of the American Economic Association.)

Sumner offers this image. The horizontal axis shows the proportion of farms, where you can think of farms as ranked by size from smallest in sales to largest. The vertical axis shows the proportion of agricultural output. Thus, the bottom 60% of farms represent about 5% of all agricultural revenue. The line for 1987 is highest, for 1997 is lower, and for 2007 is lowest, which shows that smaller farms are producing a lower share of total output over time. 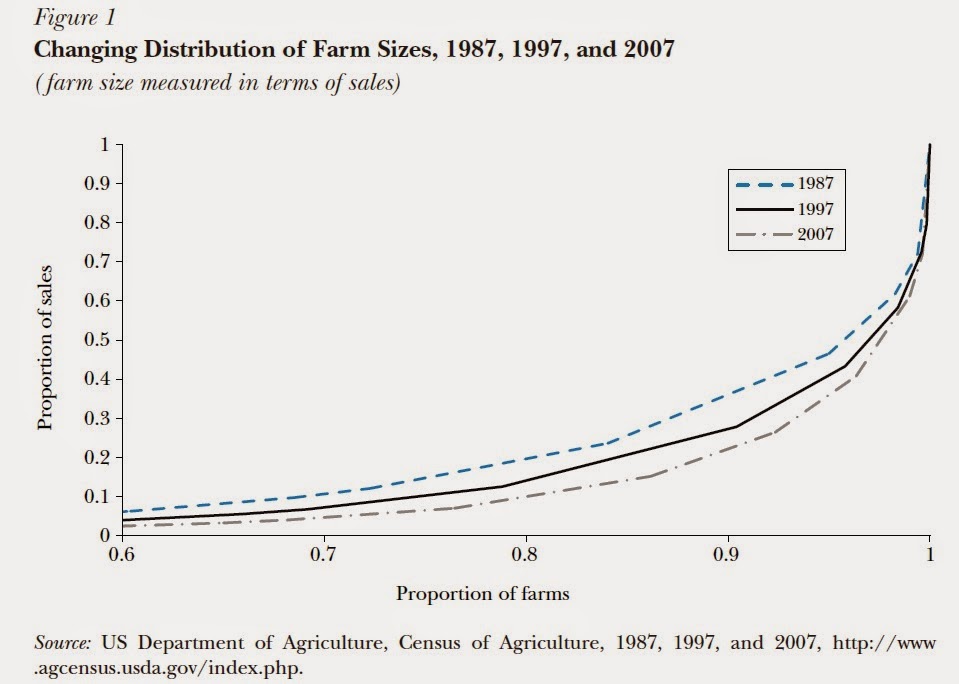 Sumner argues that farm subsidies can't explain this growing concentration, nor can contractual relationships in the agricultural chain of production. The size of farm operations is growing both in agricultural sectors with and without farm subsidies, and with and without a high dependence on contractual relationships. He argues that the most likely factor driving economies of scale in agriculture is the interrelationship between technological developments and good management: that is, being the kind of  strong manager who can take advantage of new technology has been a continual and even a growing advantage in U.S. agriculture. Sumner concludes along these lines (citations omitted):

The size of commercial farms is sometimes best-measured by sales, in other cases by acreage, and in still other cases by quantity produced of specific commodities, but for many commodities, size has doubled and doubled again in a generation. That does not mean that typical commercial farm operations are becoming large by any nonfarm corporate standard, or that there is any near-term prospect that these large firms will be able to exercise market power. For example, even as the typical herd size of dairy farms rises from 500 cows to 1,000 to 2,000, there will remain thousands of commercial farms operating the national milk cow herd of eight or nine million cows. The few dairy farms with 10,000 cows are located in several units in distinct locations and remain a small share of the relevant national and international market into which they deliver. ...

Changes in farm size distributions and growth of farms seems closely related to technological innovations, managerial capability, and productivity. Opportunities for competitive returns from investing financial and human capital in farming hinge on applying managerial capability to an operation large enough to provide sufficient payoff. Farms with better managers grow, and these managers take better advantage of innovations in technology, which themselves require more technical and managerial sophistication. Farms now routinely use outside consultants for technological services such as animal health and nutrition, calibration and timing of fertilizers and pesticides, and accounting. The result is higher productivity, especially in reducing labor and land per unit of output. Under this scenario, agricultural research leads to technology that pays off most to more-capable managers who operate larger farms that have lower costs and higher productivity. The result is reinforcing productivity improvements.

Subsidy programs seem to be relatively unimportant in the evolution of farming in the United States. Farm sizes are growing, numbers of commercial farms are falling, and farm operations are transforming industries with and without commodity subsidies. In specific instances and for specific commodities, farm programs have affected the patterns of farm size and growth.