How Did Germany Limit Unemployment in the Recession?

Here's a puzzle: During the Great Recession, the total contraction in economic output was noticeably larger in Germany than in the United States, but the rise in the unemployment rate was noticeably higher in the United States than in Germany. How did Germany manage it? Shigeru Fujita and Hermann Gartner offer "A Closer Look at the German Labor Market ‘Miracle’" in the most recent issue of the Business Review published by the Federal Reserve Bank of Philadelphia, (Q4, 2014, pp. 16-24).

Let's start by stating the puzzle clearly. The top figure shows the change in  unemployment rates for the U.S. and Germany during the recession. The bottom figure shows the fall in real output in each economy. 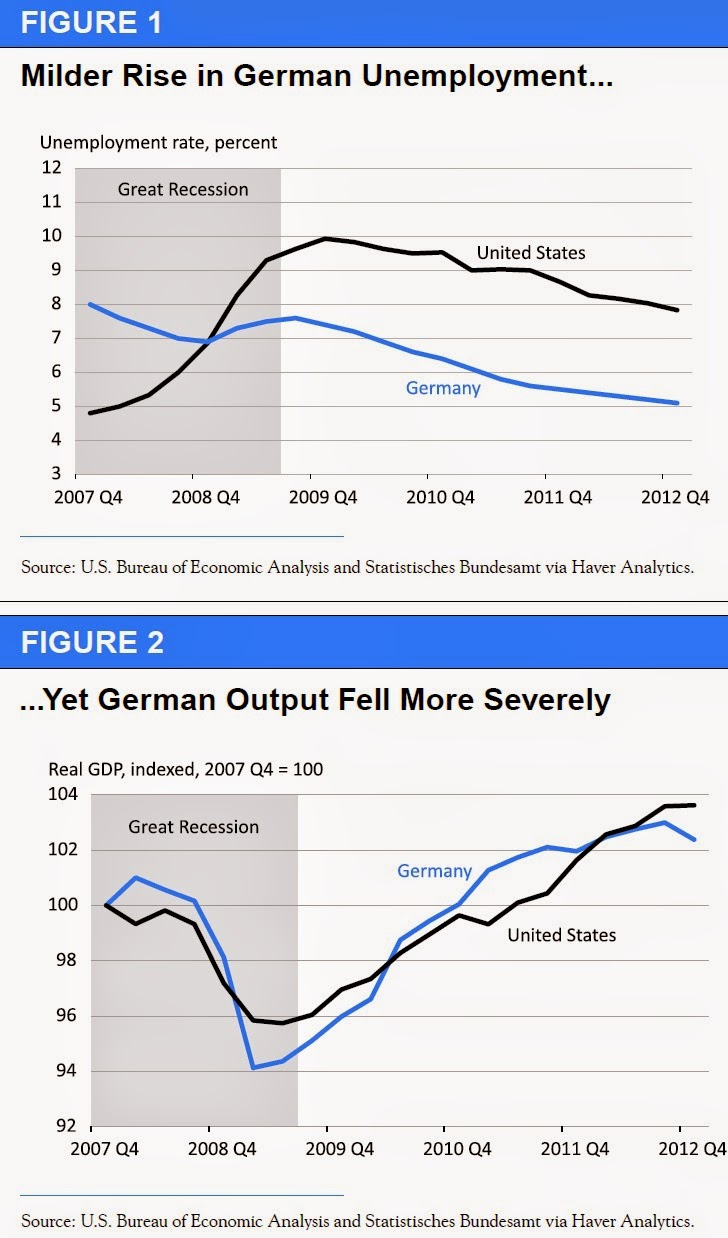 Germany does have several government programs that encourage firms to reduce hours when business slows down, rather than firing employees. But Fujita and Gartner argue that these programs have existed in past recessions, and they didn't seem to have any particularly large effect in the most recent recession. They write:

One is the shorttime work program. When employees’ hours are reduced, the participating firm pays wages only for those reduced hours, while the government pays the workers a “short-time allowance” that offsets 60 percent to 67 percent of the forgone earnings. Moreover, the firm’s social insurance contributions on behalf of employees in the program are lowered. In general, a firm can use this program for at most six months. At the beginning of 2009, though, when the slowdown of the economy became apparent, the German government encouraged the use of the program by expanding the maximum eligibility period first to 18 months and then to 24 months and by further reducing the social security contribution rate. The usual eligibility requirements were also relaxed.

An important thing to remember here is that these special rules had also been applied in past recessions and thus were not so special after all. True, the share of workers in the program increased sharply in 2009, and thus it certainly helped reduce the impact of the Great Recession on German employment. But a more important observation is that even at its peak during the Great Recession, participation in the program was not extraordinary compared with the levels observed in past recessions. Moreover, in previous recessions, the German labor market had responded in a similar manner to the U.S. labor market.

Another German program that some have credited with staving off high unemployment is the working-time account, which allows employers to increase working hours beyond the standard workweek without immediately paying overtime. Instead, those excess hours are recorded in the working-time account as a surplus. When employers face the need to cut employees’ hours in the future, they can do so without reducing workers’ take-home pay by tapping the surplus account. German firms overall came into the recession with surpluses in these accounts. Thus, qualitatively speaking, this program certainly reduced the need for layoffs. However, less than half of German workers had such an account, and most working-time accounts need to be paid out within a relatively short period — usually within a year or less. According to Michael Burda and Jennifer Hunt, the working-time account program reduced hours per worker by 0.5 percent
in 2008-09, accounting for 17 percent of the total decline in hours per worker in that period.

To understand the allure of the alternative explanation, consider this graph showing the German employment rate in recent decades. Notice that after around 2003, Germany employment starts steadiily rising, and that trend shows only a hiccup during the Great Recession. 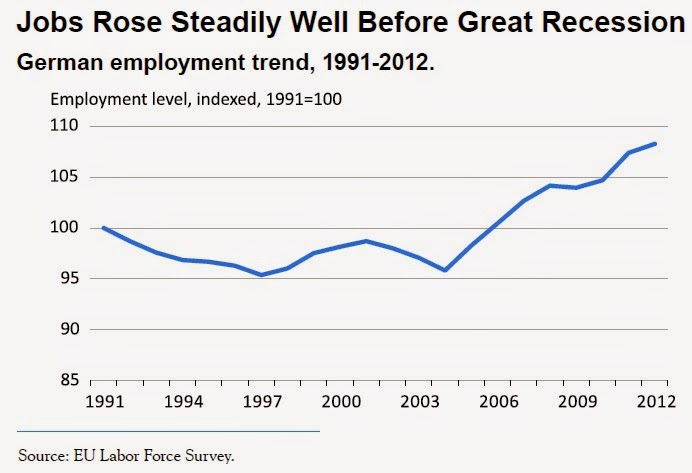 What caused German employment to start rising around 2003?

We argue that the underlying upward trend was made possible by labor market policies called the Hartz reforms, implemented in 2003-05. ... The Hartz reforms are regarded as one of the most important social reforms in modern Germany. The most important change was in the unemployment benefit system. Before the reforms, when workers became jobless, they were eligible to receive benefits equal to 60 percent to 67 percent of their previous wages for 12 to 32 months, depending on their age. When these benefits ended, unemployed workers were eligible to receive 53 percent to 57 percent of their previous wages for an unlimited period. Starting in 2005, the entitlement period was
reduced to 12 months (or 18 months for those over age 54), after which recipients could receive only subsistence payments that depended on their other assets or income sources. Moreover, unemployed workers who refused reasonable job offers faced greater and more frequent sanctions such as cuts in benefits. To further lower labor costs and spur job creation, the size of firms whose employees are covered by unemployment insurance was raised from five to 10 workers. Also, regulation of temporary contract workers was relaxed. Furthermore, starting in 2004, the German Federal Employment Agency and the local employment agencies were reorganized with a stronger focus on returning the unemployed to work and by, for example, outsourcing job placement services to the private sector.

An earlier post from February 14, 2014,  "A German Employment Miracle Narrative," argues that the flexibility of German wages and labor market institutions starting in the mid-1990s started the rise in German employment. In this story, the Hartz reforms take on less importance, but the emphasis of the story is still on greater flexibility in markets, not government programs for sharing hours. Fujita and Gartner make a similar point: "In other words, in the boom leading up to the Great Recession, wage growth was much more muted than during previous booms, and thus this wage moderation was an important factor in creating the upward trend in employment."

A final point from Fujita and Gartner is that the comparison from the U.S. to Germany isn't apples-to-apples, because the underlying causes of the recessions were different. Germany didn't have a housing bubble; instead, it had an export bust. The incentives for what kind of financial crisis emerges and for laying off workers may be rather different in these two different kinds of recessions. They write:

The recession in Germany was brought about by a different shock than that which triggered the recession in the U.S. The U.S. economy suffered a decline in domestic demand as the plunge in home values reduced households’ net wealth, whereas Germany had experienced no housing bubble. Instead, the decline in German output was driven by a short-term plunge in world trade. Whether a recession is expected to be short or long-lasting is an important factor in firms’ hiring and firing decisions. If a firm expects a downturn to last only a short period, it may well choose not to cut its work force, even though it faces lower demand, especially if laying off and hiring workers is costly, as it is in Germany. Consistent with this possibility, Burda and Hunt point out anecdotal
evidence that, especially by 2009, German firms were reluctant to lay off their workers because of the difficulty in finding suitable replacements.

Of course, the argument that German unemployment didn't rise as much because of reductions in unemployment benefits, low wage growth, and flexible labor markets doesn't prove that German innovations like the short-time allowance or working-time accounts are a bad idea. They may still be moderately helpful. But it doesn't look like they are the main explanation for Germany's success in limiting the rise in unemployment during and after the recession.