The Bank of International Settlements carries out the Triennial Central Bank Survey of Foreign Exchange and Derivatives Market Activity, which in 2016 collected data from roughly 1,300 banks and other foreign exchange dealers across 52 countries. Michael Moore, Andreas Schrimpf, and Vladyslav Sushko describe some of the findings in "Downsized FX markets: causes and implications," which appears in the BIS Quarterly Review (December 2016, pp. 35-51). 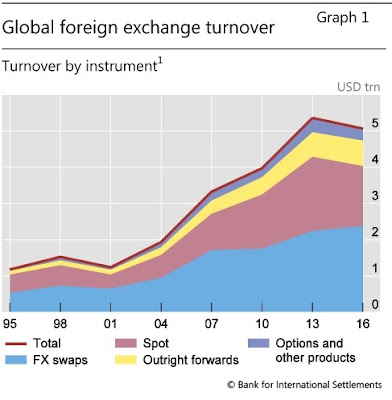 Why the decline? The key point to understand is that most foreign exchange trading isn't related to exports and imports of goods and services According to the World Trade Organization, total global exports of merchandise and services approached $24 trillion for the entire year of 2014. Clearly, this isn't going to explain an FX market of $5.1 trillion per day.  Moreover, foreign direct investment isn't the primary drivers of the FX market, either. Foreign direct investment is about $1.0-$1.5 trillion per year.

Instead, the gargantuan FX market is driven by financial investments, both those trying to make money directly from fluctuations in this market, but also those who are buying and selling financial assets in other currencies, as well as hedging the risks of fluctuations in FX rates. Moore, Schrimpf, and Sushko describe in some detail how the FX market is evolving:


Part of the decline in global FX activity can be ascribed to less need for currency trading, as global trade and capital flows have not returned to their pre-Great Financial Crisis (GFC) growth rates. However, conventional macroeconomic drivers alone cannot explain the evolution of FX volumes or their composition across counterparties or instruments. This is because fundamental trading needs only account for a fraction of transactions. Instead, the bulk of turnover reflects inventory risk management by reporting dealers, their clients’ trading strategies and the technology used to execute trades and manage risks. ... The composition of participants changed in favour of more risk-averse players. The greater propensity to transact FX for hedging rather than risk-taking purposes by these investors has led to a decoupling of turnover in most FX derivatives from that in spot and options trading. Patterns of liquidity provision and risk-sharing in FX markets have also evolved. The number of dealer banks willing to warehouse risks has declined, while non-bank market-makers have gained a stronger footing as liquidity providers, even trading directly with end users. These shifts have been accompanied by complementary changes in trade execution methods. Market structure may be slowly shifting towards a more relationship-based form of trading, albeit in a variety of electronic forms.

More detail on the results of the Triennial Survey is available at the BIS website.  Here's one table that always catches my eye, dividing up the market according to the currency used in the foreign exchange deal. The statistics here include both buying and selling a currency, which of course both happen at the same time, but as a result of counting them separately, the total size of the market is 200%. Measured in this way, the finally column shows that US dollar accounted for 88% of the market volume (although I find it more useful to think of this as 44% out of a market size of 100%). The other nine most traded currencies are the euro (EUR), the Japanese yen (JPY), the British pound (GBP), the Australian dollar (AUD), the Canadian dollar (CAD), the Swiss franc (CHF), the Chinese yuan (CNY), the Swedish krona (SEK), and the New Zealand dollar (NZD).

Clearly, the US dollar still rule the roost when it comes foreign exchange markets: indeed, it'd size of the market is the same now as back in 1998. Conversely, the share of the euro in foreign exchange markets started strong in 2001 and 2004, but has declined since then. The share of China's yuan in foriegn exchange market was essentially zero as recently as 2007, but it has now risen to 4% in the final column of the table--which I find more useful to think of as 2% of all FX transactions.