Thomas Schelling (1921-2016), who died earlier this week, shared the economics Nobel prize in 2005 "for having enhanced our understanding of conflict and cooperation through game-theory analysis." In some ways, he was best-known for his analysis of nuclear strategy, and the arguments expressed in his 19960 work, "The Strategy of Conflict." For example, the New York Times headlined its obituary, "Thomas C. Schelling, Master Theorist of Nuclear Strategy, Dies at 95."  As William Grimes writes in the obituary:


"Professor Schelling analyzed superpower negotiations in the way that he analyzed the conflicts between, say, a blackmailer and his client, a parent and a child, or management and labor. In each case, he wrote, “there is a mutual dependence as well as opposition,” with each side seeking out tests of strength at less than crisis levels. Among other counterintuitive propositions he put forth, Professor Schelling suggested that one side in a negotiation can strengthen its position by narrowing its options, using as an example a driver in a game of chicken who rips the steering wheel from the steering column and brandishes it so his opponent can see that he no longer controls the car. He also argued that uncertain retaliation is more credible and more efficient than certain retaliation."


But Schelling has a remarkably fluid ability to bring strategic and game theory insights to bear on a very wide range of situations. Paul Samuelson, a great economist in his own right who also knew how to turn a phrase, once wrote: "In Japan Thomas Schelling would be named a national treasure. Age cannot slow down his creativity, nor custom stale his infinite variety."

By coincidence, the most recent issue of the Quarterly Bulletin of the Bank of England (2016, Q4)includes an article about "Agent-based models: understanding the economy from the bottom up," in which Arthur Turrell explains one of my favorites in Schelling's work: an effort to investigate whether relatively mild discriminatory feelings can lead to quite segregated outcomes.  As Turrell explains, Schelling tackled the problem this way:

"Imagine there are two species named Econs and Humans who co-exist. Econs are always rational. Humans are emotional and sometimes make mistakes. Although Econs and Humans peacefully co-exist and live in the same city, they each have a slight preference for living closer to the same species. This propensity to want to be near others of their type can be characterised by a number f, which can be thought of as their strength of preference. It represents the fraction of neighbours that they ideally wish to be of the same species, with an f of 1 meaning that they will only be happy if all of their neighbours are of the same species. If agents of either type are unhappy, they can choose to move house and, at random, are given a new property. Over time, more and more agents will be happy with where they live and stop moving."

Start out with a checkerboard in which the two groups are randomly distributed, which might look like this: 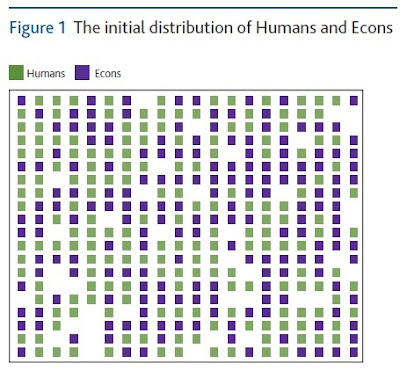 Now say that the strength of preference is a fairly high .7. Over time, this preference for one's own group combined with the process of random moving leads to a completely segregated outcome like this: 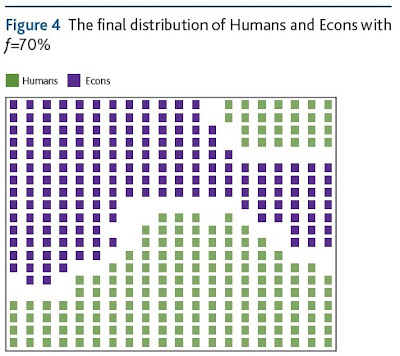 But a striking finding from Schelling's work is that much lower levels of preference can still lead to considerable segregation. Indeed, there is often a "tipping point"--a concept brought into wide use by Schelling's work--where a relatively small change in preference leads to a much larger change in the degree of segregation.  Turrell offers the example of what happens as the preference parameter rises from .25 to .26.

This figure shows that at .25, the two groups are still pretty well integrated. Apparently, a mild but non-zero degree of discriminatory feeling  is consistent with a high degree of integration--which is a useful insight. 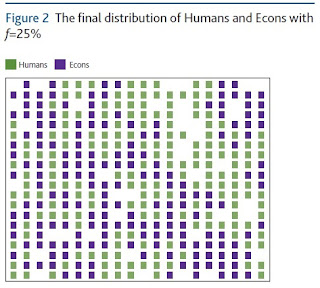 But in this example, the rise from .25 to .26 is a tipping point, in which the degree of segregation (which can be measured by how many neighbors the agents have from the other group) rises substantially. 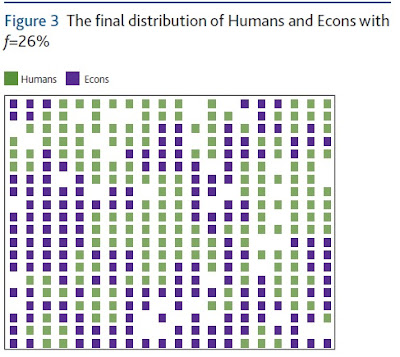 Of course, you may wonder about many potential tweaks to this approach: what if the two groups had different preference, or each group had a range of preferences; are the outcomes different if one group is numerically larger than another: what would happen be like if the surface was not defined by squares within a larger square, but some other shape (like squares within an elongated rectangle, or triangles within a triangle). Agent-based modelling lets you ask all these kinds of questions, and through simulations of what will happen as the agents move, figure out what makes a difference and what doesn't.

Turrell's essay uses Schelling's work as one example, and then delves into a broader discussion of agent-based modelling. The potential advantages of this approach is that you can see what overall outcome emerge from clearly-specified individual incentives. For example, one can explore stock markets or housing markets with different types of buyers and sellers who react differently to new information and to changes in prices.  There are applications in particle physics, biology/ecology, epidemiology, computer science, military strategy, and others.

Turrell enumerates strengths as well as weaknesses of an agent-based approach. He write:


In many ways, the greatest strength — the flexibility to model such a vast range of scenarios — is also the greatest weakness. The sheer extent of choice in constructing agent-based models as compared to more traditional economic models means that modellers face the problem of selecting the right components for the problem at hand. Simulation results can vary dramatically depending on which assumptions are used, so modellers must take great care in choosing them. Further work is needed to develop objective means for choosing the most appropriate assumptions.

One particular concern is that at least in some circumstances, human agents may be able to perceive where a group dynamic is headed--and then change plans or form coalitions to alter that outcome.

Ranging from nuclear strategy to issues of segregation and integration suggests the ability of Thomas Schelling to range across a wide array of topics and approaches.  His early work introduced the idea of a "focal point," which is an outcome that many people recognize based on preference and tradition. Thus, he asked people where they would meet a stranger in Manhattan, if they had not previously agreed on a time and place to meet, and found that there was (at that time) a focal point of meeting at the information booth in Grand Central Station at noon. For a period in the 1980s, he focused on how to encourage people to stop smoking. For many economists, the first time we started thinking seriously about carbon emissions and the risks of climate chaange as an economic issue was when Schelling, back in 1992, gave his American Economic Association Presidental Address on the subject "Some Economics of Global Warming" American Economic Review, 82: 1, March,  pp. 1-14). Another insight associated with Schelling is that he was involved with formulating  "The Origins of the Value of a Statistical Life Concept"  (November 25, 2014).

For an overview of Schelling's earlier work, a useful starting point is a 1989 essay by Richard Zeckhauser in the Journal of Economic Perspectives, on the occasion of Schelling being named a Distinguished Fellow of the American Economic Association. Zeckhauser started the essay this way:

Thomas Crombie Schelling thinks about the essence of phenomena. In scanning everyday behavior, he sees patterns and paradoxes that others overlook. When each driver slows down almost imperceptibly for a look at a minor roadside distraction, he observes, the result can be a massive traffic tie-up. The world can be divided into weak and powerful parties, but in some situations excessive power can be a handicap. Someone who is overweight may pledge fealty to a strict diet, then cheat at night. Schelling assesses the fat man's intramural struggle with the thin man trying to get out, noting that, with variations in the context, the Jekyll-and-Hyde parable may apply to us all. Schelling distills such essences and demonstrates their presence in many important social phenomena. "It's hard to define or categorize Tom's work," notes James Coleman, the sociologist. "If you ask, 'Does he do research?' I have to answer 'No, not exactly.' Then if you ask what he does for a living, I have to answer that he lives by his wits."

Posted by Timothy Taylor at 9:04 AM