A more fluid labor market is socially valuable, because it helps unemployment rates stay lower and offers broader opportunity. Also, employers who know that employees have decent and readily available outside options have better incentive to treat employees well. But most economists recognize that labor markets are full of "frictions," which is a catch-all term for the costs involved in making connections between willing workers and willing employers. (Indeed, the 2010 Nobel Prize in economics went to Peter A. Diamond, Dale T. Mortensen and Christopher A. Pissarides "for their analysis of markets with search frictions".) There's an old rule of thumb that one should expect a month of job search for every $10,000 you would like to earn, and even though that specific number is probably an unreliable guess, the comment makes the point that the time and information costs involved in finding a new job can be high. One of the very practical barriers for a lot of unemployed workers is a lack of information about available jobs, and a lack of experience in how to find the relevant information.

Active labor market policies are a government attempt to reduce these costs. In a December 2016 Issue Brief, the Council of Economic Advisers discusses the subject of "Active Labor Market Policies: Theory and Evidence for What Works."  The CEA defines active labor market policies as "policies that promote participation in the labor force and help workers match to employment opportunities. These programs include employment services, job search assistance, job training programs, and employment subsidies. But the empirical evidence also finds that not all approaches to supporting employment and earnings are equally successful, with some programs having substantial benefits relative to their costs while others do not."

As I have pointed out here before, US spending on active labor market policies (as a share of GDP) is considerably less than most other high-income countries. Here's a figure from the CEA: 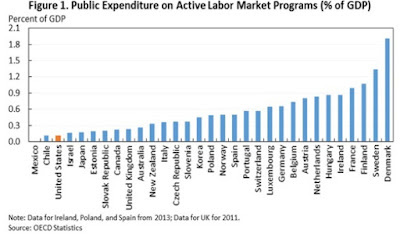 Moreover, even this low US level has been on a generally downward trend for several decades: 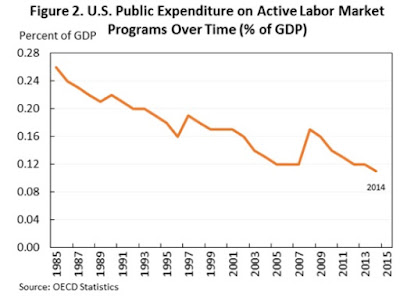 Of course, the hard-headed question is whether active labor market policies work--and whether some work better than others. The CEA report cites an array of evidence on this point (for readability, the quotations that follow omit citations and footnotes).

On offering job training for various groups: "Job training programs focusing on economically disadvantaged adults, typically those with low earnings or levels of education, consistently yield significant positive effects on employment outcomes. Recent evidence comes from evaluations of WIA [Workforce Investment Act] training programs for disadvantaged adults ...  these training programs increased quarterly earnings between $500 and $800 (in the range of 10 to 25 percent increases) for workers by three years after receiving training, in addition to positive employment effects. ... Sectoral training, one specific type of training program that focuses on training workers for jobs in particular industries and which typically develops and implements training programs in partnership with employers, is an especially promising avenue for disadvantaged workers. ... In one successful example of training leading to positive results for mid-career workers ... when dislocated workers obtain training in the form of community college coursework, the equivalent of one academic year of courses translates into increases in long-term earnings of between seven and ten percent. They also find that these effects are more pronounced when coursework is concentrated on quantitative courses."

On employment subsidies for hiring workers: "While effective at encouraging employment, an important consideration for employment subsidies is that they be designed and administered in ways that mitigate two potential drawbacks: The first is that some portion of their value may be captured by firms who would have hired such workers in any event. A second is that targeted employer-based subsidies may lead to stigmatization of the targeted group among potential employers." I've written before on "What Do We Know about Subsidized Employment Programs?" (April 25, 2016), and noted that there are a couple of large-scale studies underway that should provide fuller evidence here.

Just to be clear, not all the evidence on active labor market policies is positive. The design and context of active labor market policies matters. But in my reading, the evidence is certainly strong enough to support additional large-scale experimentation with these policies, which can be designed in a way to facilitate a later evaluation of the results.

Finally, I'll add that the main focus of the CEA report is on US-based evidence about active labor policies, but an array of international evidence is also available. For a literature review, interested readers might begin with a literature review paper by David Card, Jochen Kluve and Andrea Weber What Works? A Meta Analysis of Recent Active Labor Market Program Evaluations," published by the German Institute for the Study of Labor (IZA Discussion Paper No. 9236, July 2015).