Women in the US Labor Market 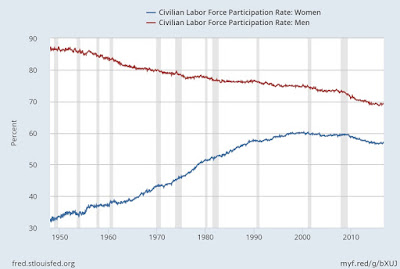 The Russell Sage Foundation Journal has devoted its August 2016 issue to the overall topic "A Half-"Century of Change in the Lives of American Women," The issue contains a short introduction followed by 10 readable essays. Many of the themes are captured in the first essay, "Five Decades of Remarkable but Slowing Change in U.S.Women’s Economic andSocial Status and Political Participation," by Martha J. Bailey and Thomas A. DiPrete. They summarize some of the changes that have happened, and not yet happened (citations omitted):


Women made up less than one-third of all U.S. employees in 1950, but today make up almost half. In the 1960s, they earned around 60 percent of what men did, but this figure has risen today to about 80 percent. Currently, more women than men enroll in and complete college, and changes in women’s roles as mothers and partners have redefined the “typical” American family. ...  Despite these advances, other evidence suggests that women’s progress has slowed or stalled. Pay gaps at the top of the income distribution are large. Women make up less than 10 percent of corporate boards and less than 2 percent of CEOs. The integration of women into the so-called STEM fields has been slow since 1990.  The odds that a woman earns a physical science, engineering, or economics major have hardly changed in the past twenty years.

It's well-known that the female/male wage gap has been falling over time, and Bailey and DiPrete provide this figure along with some discussion of possible explanations for what has happened and for the remaining gap. 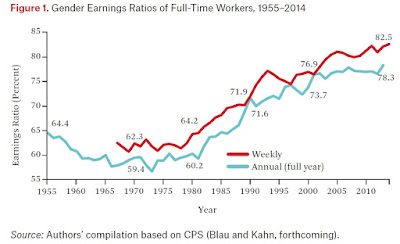 In considering the range of reasons for the remaining gender pay gap. I was struck by the essay by Kim A. Weeden, Youngjoo Cha. and Mauricio Bucca, called "Long Work Hours, Part-Time Work, and Trends in the Gender Gap in Pay, the Motherhood Wage Penalty, and the Fatherhood Wage Premium." Taking up some themes that recur in a number of the other papers, they write (citations and footnotes mostly omitted):

One of the key empirical insights of this literature is that the gender gap in wages at the aggregate level is perpetuated by persistent gender differences in individual labor market behaviors: whether men and women work for pay, the occupations and industries in which they work, and the number of hours per week they work. These gender differences emerge in the context of structural changes in the distribution of jobs with particular attributes (such as expected work hours) and in the wages associated with these attributes, resulting in complex and offsetting effects on the gender gap in wages. For example, Youngjoo Cha and Kim Weeden (2014) show that the diffusion of long work hours in the United States in the 1990s and 2000s, coupled with the persistent gender gap in long work hours and rising hourly compensation for long work hours, was associated with an increase in the gender gap in wages after adjusting for other wage-relevant attributes. These trends largely offset wage-equalizing shifts in women's educational attainment.

A second empirical insight is that much of what appears to be a gender wage gap is better understood as a gender-specific family gap in pay or, as they are known in the economic and sociological literatures, the motherhood wage penalty and fatherhood wage premium: mothers earn less than observationally similar childless women, and fathers earn more than observationally similar childless men.