Adding Monetary Costs of Lost Lives to the Opioid Crisis

Sometimes if you can justify putting a bigger dollar sign in front of a problem, then you can also justify giving it more attention. This is a useful function of "The Underestimated Cost of theOpioid Crisis," a report recently published by the Council of Economic Advisers (November 2017).  As background, here's a figure showing the rise in opioid-related deaths--more than doubling in the last decade. 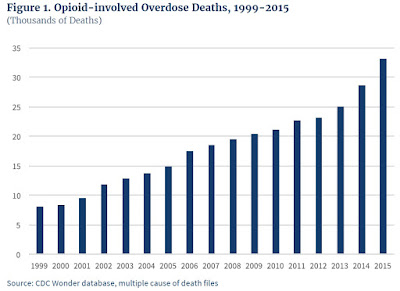 Total deaths from opioid overdoses have climbed very close to the number of deaths from motor vehicle accidents, which totaled over 37,000 in 2016. Here's the age distribution of the opioid overdose deaths. They are not concentrated among elderly Americans, but rather in the 25-55 age bracket. 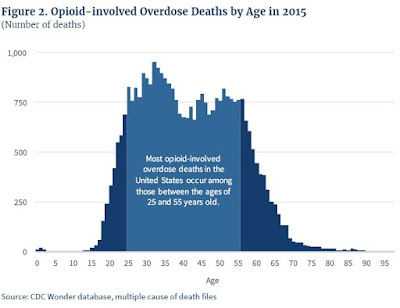 As the CEA report points out, the most prominent recent study of this topic in 2016 calculates the costs of opioid problems by measuring the costs of fatalities in terms of lost potential earnings. Thus, the biggest change in the CEA report is to put a monetary value on the deaths. The report notes:


"Among the most recent (and largest) estimates was that produced by Florence et al. (2016), who estimated that prescription opioid overdose, abuse, and dependence in the United States in 2013 cost $78.5 billion. The authors found that 73 percent of this cost was attributed to nonfatal consequences, including healthcare spending, criminal justice costs and lost productivity due to addiction and incarceration. The remaining 27 percent was attributed to fatality costs consisting almost entirely of lost potential earnings. ... Using conventional estimates of the losses induced by fatality routinely used by Federal agencies, in addition to making other adjustments related to illicit opioids, more recent data, and underreporting of opioids in drug overdose death certificates, CEA finds that the overall loss imposed by the crisis is several times larger than previous estimates."

Three Federal agencies have issued formal guidance on the VSL [value of a statistical life] to inform their rule-making and regulatory decision-making. The U.S. Department of Transportation’s (DOT) guidance (U.S. DOT 2016) suggests using a value of $9.6 million (in 2015 dollars) for each expected fatality reduction, with sensitivity analysis conducted at alternative values of $5.4 million and $13.4 million. According to a recent white paper prepared by the U.S. Environmental Protection Agency’s (EPA) Office of Policy for review by the EPA’s Science Advisory Board (U.S. EPA 2016), the EPA’s current guidance calls for using a VSL estimate of $10.1 million (in 2015 dollars), updated from earlier estimates based on inflation, income growth, and assumed income elasticities. Guidance from the U.S. Department of Health and Human Services (HHS) suggests using the range of estimates from Robinson and Hammitt (2016) referenced earlier, ranging from a low of $4.4 million to a high of $14.3 million with a central value of $9.4 million (in 2015 dollars). The central estimates used by these three agencies, DOT, EPA, and HHS, range from a low of $9.4 million (HHS) to a high of $10.1 million (EPA) (in 2015 dollars).

Putting a monetary value on lives lost raises other issues, too, like whether the same value is appropriate regardless of whether the lives lost are young, middle-aged, or elderly. Rather than trying to resolve these issues, a common approach is to offer a range of possible options. In this report, the preferred estimate is that total costs of the opioid epidemic in 20115 were $504 million, of which $72.3 million is the kinds of costs from the earlier 2016 study, and the costs of lost lives are $431.7 billion. As the report explains:

"There are several reasons why the CEA estimate is much larger than those found in the prior literature. First, and most importantly, we fully account for the value of lives lost based on conventional methods used routinely by Federal agencies in cost-benefit analysis for health related interventions. Second, the crisis has worsened, especially in terms of overdose deaths which have doubled in the past ten years. Third, while previous studies have focused exclusively on prescription opioids, we consider illicit opioids including heroin as well. Fourth, we adjust overdose deaths upward based on recent research finding significant underreporting of opioid-involved overdose deaths."

I do not claim to be well-versed in this literature, but it seems to me as if lots of people are deploring the opioid epidemic, but not many changes are in the works that would plausibly bring a large reduction in these costs.
Posted by Timothy Taylor at 8:59 AM