Snapshots of the US Housing Market: Ten Years Later

Ten years ago, December 2007, was the start of the Great Recession. Have US housing markets recovered? My go-to source for regular updates on the US housing market is "Housing Markets at a Glance," a monthly chartbook published by the Housing Finance Policy Center at the Urban Institute. Here are some snapshots from the most recent (November 2017) issue.

The total value of US housing can be broken down into homeowners' equity and the mortgage debt still outstanding. As this figure shows, during the fall in housing prices from 2006 to 2011, the total value of US housing fell by about $7 trillion--a fall of roughly 30%. Of course, the fall in housing prices didn't reduce the debt that people already owed (the blue line), so it mainly shows up in home equity (the yellow line), which falls by about 50%. Home equity is usually larger than outstanding debt, but that relationship reversed itself for a few years. However, the total value of US housing has now risen again and exceeds its level in 2006, while the amount of housing debt has actually declined a bit.

Here's a figure showing the corresponding annual change in home prices, using two housing price index (HPI) measures, one from CoreLogic and one from Zillow.

Unsurprisingly, the sharp decline in home mortgages led to severe stresses for households. This figure shows the share of home loans in serious delinquency or actual foreclosure. At its worst, about one-tenth of all mortgage loans in the entire US were more than 90 days delinquent or in foreclosure.

A much larger number of households were not delinquent on their mortgage, but found themselves "underwater"--that is, what they owed on the mortgage was more than the house would have been worth in a sale. In 2009, about one-fourth of all US homes with a mortgage had negative equity.

The economic story behind these charts--the loss of value, price meltdown, delinquencies, and negative equity--is cataclysmic.  The charts also provide some evidence on what was happening behind the scenes in mortgage finance. To understand these figures, it's useful to know that most mortgages are now "securitized," meaning that they are financed by investors who purchase financial securities based on the underlying mortgage.  These investors can be banks, pension funds, insurance companies, hedge funds, or others. The process of securitization can happen through the "government-sponsored enterprises" of Fannie Mae, Freddie Mac, and Ginnie Mae, or they can happen through the private sector with "private-label" securities.

One big change the years just before the melt-down in housing prices was that the private-label securities expanded substantially, and in particular expanded into subprime and Alt-A mortgages, which are riskier than the usual "prime" mortgage. (Alt-A is a risk category in-between prime and subprime.)

This share of the housing market going to these private-label securities, which had been rising slowly in the late 1990s, spiked for few years. But in the heat of the housing crisis, they melted away. Now the government-sponsored firms almost totally dominate mortgage-backed securities. Of course, they survive because they received huge federal government bailouts, as well as a promise that the government would stand behind them in the future. 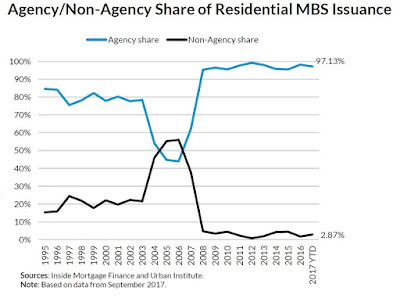 In the aftermath of the housing market meltdown, and the near-demise of private-label mortgage-backed securities, it's no surprise that it's become harder to get a mortgage loan. Indeed, one can make a case that the market is still in overreaction mode. This index offers a calculation of the share of owner-occupied home purchase loans that are likely to default. It separates out the risk that it is due to borrowers not repaying, and the product-risk that is due to higher-risk loans being made.

Thus, you can see the arrival of the larger share of subprime and Alt-A loans arriving in the market--and how the product risk they brought with them pushed up the risk of default. The Urban Institute estimate is that time from about 2001-2003 can be viewed as "Reasonable Lending Standards," which implies that the very low level of expected defaults in recent years is part of an ongoing overreaction to what went so badly lwrong.

There's of course a lot more to this story of the Great Recession. But it does support a concern that when financial regulators see a large and rapid build-up of a new kind of high-risk loan, they should seriously consider putting on the brakes. And it's a reminder to investors that when asset prices shoot up rapidly, as housing prices did in the early 2000s, it's wise to start thinking about how to ensure a soft landing.
Posted by Timothy Taylor at 10:10 AM