What Financial Risks are Lurking

The Office of Financial Research, within the US Department of the Treasury, was created by the  Wall Street Reform and Consumer Protection Act of 2010 (commonly known as the Dodd-Frank act), to provide analysis and data  for the Financial Stability Oversight Council, another creation of the same law. It's Financial Stability Report 2017 discusses some "key vulnerabilities" of the financial system.

Resolution Risks at Systemically Important Financial Institutions. The term "resolution risk" refers to what process will begin if a big financial institution becomes insolvent. The regulators are still struggling to address some possible issues. "The treatment of derivatives held by a failing financial firm continues to present a conundrum for policymakers seeking to balance contagion and run risks against moral hazard concerns. Tools for orderly resolution of failing systemic nonbank financial firms remain less developed than for banks, despite the material impact of some nonbank failures in the past and the growing importance of nonbanks, particularly central counterparties (CCPs), in the financial system."

A Single Bank Deals with all Treasury Securities. The Treasury market will soon be more dependent on a single bank for the settlement of Treasury securities and related repos. A service disruption, such as an operational risk incident or even the bank’s failure, could impair the liquidity and functioning of these markets because some customers will need time to move their operations elsewhere. It could also disrupt other markets that rely on Treasuries for pricing and funding. The 2007-09 financial crisis showed the damage that can be done if activity in short-term funding markets is constrained. Dealers in Treasury securities use clearing banks to settle Treasury cash transactions. Since the 1990s, these services have been provided by two clearing banks, JPMorgan Chase & Co. and Bank of New York Mellon Corp. (BNY Mellon). With JP Morgan Chase’s announcement in July 2016 that it intends to cease provision of government securities settlement services to broker-dealer clients, this business will be concentrated in a single bank. A disruption in BNY Mellon’s Treasury settlement could have broad implications for the Treasury market. It could disrupt trading in Treasuries. If settlement services were interrupted for an extended period, risks could spread further to markets that rely on the Treasury market for hedging and pricing."

Fragmentation of Stock Markets. In 1996, almost all stock trading happened on the main exchanges of the NYSE or Nasdaq. Now, NYSE and Nasdaq each run a number of separate exchanges, and there are 50 off-exchange stock markets. This fragmentation raises possibilities of  playing one market against another, or of liquidity failing in one market with effects cascading across other markets. 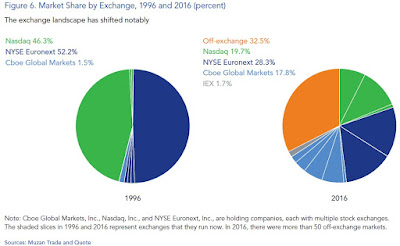 The Shift Away from LIBOR. The London Interbank Offered Rate, or LIBOR, has long been a benchmark for global financial transactions. But some will remember the scandal about a decade ago when it came to light that some traders had been making money by nudging the benchmark rate up or down. But LIBOR is no longer a good benchmark.


"Interest payments on at least $10 trillion in credit obligations and more than $150 trillion in the notional value of derivatives contracts were linked to U.S. dollar LIBOR at the end of 2013. But LIBOR is unsustainable across a number of currencies. It is based on a survey of a shrinking pool of market participants and reflects transactions in a shrinking market. Most LIBOR survey submissions are based on judgment rather than actual trades, and the rate tracks unsecured transactions, which represent a small share of banks’ wholesale funding."

A transition is underway to a new benchmark rate, the Secured Overnight Financing Rate (SOFR), which will be generated by the Federal Reserve Bank of New York. But shifting over tens of trillions of dollars in transactions from one benchmark rate to another may bring some bumps.

Risks if Low Interest Rates and Volatility Increase Risk-Taking. "The OFR has highlighted in each of our annual reports the risk that low volatility and persistently low interest rates may promote excessive risk-taking and create vulnerabilities. ... The increase in already-elevated asset prices and the decrease in risk premiums may leave some markets vulnerable to a large correction. Such corrections can trigger financial instability when important holders or intermediaries of the assets employ high degrees of leverage or rely on short-term loans to finance long-term assets. ... Equity valuations are high by historical standards. The cyclically adjusted price-to-earnings ratio of the S&P 500 is at its 97th percentile relative to the last 130 years. ... Real estate is another area of concern. U.S. house prices are elevated relative to median household incomes and estimated national rents, although these ratios are well below the levels observed just before the financial crisis. ... Valuations are also elevated in bond markets. ... Duration — the sensitivity of bond prices to interest rate moves — has steadily increased since the crisis."

Other concerns are mentioned as well, but just to be clear, the 2017 report is in no way alarmist or predicting doom. Instead, the lesson is that it's a lot better to deal with vulnerabilities at times when the financial system is not under stress or in crisis.
Posted by Timothy Taylor at 8:00 AM