Migration from a Global Perspective

International migration is one of the hot-button subjects everywhere. The World Migration Report 2018 from the International Organization for Migration (the UN Migration Agency) provides a wealth of facts and background not just about the economics, which is my focus here, but also about regional aspects of migration, international frameworks governing migration, media coverage of migration, how potential migrants perceive their choices, and more.

Here's a table showing total international migration over time. The absolute numbers have risen considerably, but the rise when viewed as a share of global population  looks smaller.

And here's a graph showing the destinations for migration by region: 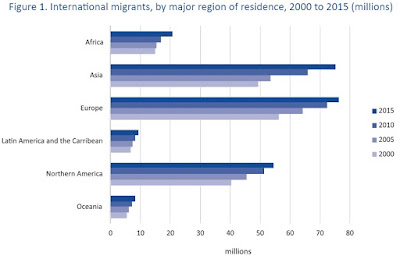 Here's a summing up of the overall patterns (with footnotes omitted for readability):


"The current global estimate is that there were around 244 million international migrants in the world in 2015, which equates to 3.3 per cent of the global population. A first important point to note is that this is a very small minority of the global population, meaning that remaining within one’s country of birth overwhelmingly remains the norm. The great majority of people in the world do not migrate across borders; much larger numbers migrate within countries (an estimated 740 million internal migrants in 20093). ... Current data indicate that in 2016 there were 40.3 million internally displaced persons (IDPs) worldwide and 22.5 million refugees. Further, the total number of people estimated to have been displaced globally is the highest on record. ...

As implied already, the main focus of the report is not on the economics of migration. However, it does sketch this brief overview of the potential benefits of migration (again, footnotes omitted):

"Migration can generate very large benefits for migrants, their families and countries of origin. The wages that migrants earn abroad can be many multiples of what they could earn doing similar jobs at home. For example, a study conducted in 2009 found that the ratio of wages earned by workers in the United States to wages earned by identical workers (with the same country of birth, years of schooling, age and sex, and rural/urban residence) abroad ranges from 15.45 (for workers born in Yemen) to 1.99 (workers born in the Dominican Republic), with a median ratio of 4.11. The wage differences and relative income gains from migration are largest for lower-skilled workers, whose international movements around the world are the most restricted. ...  Importantly, the beneficial effects of migration for migrants and their families go beyond economic impacts and frequently include improvements in other dimensions of human development, such as education and health. For example, according to a recent report by the World Bank, immigrants from the poorest countries, on average, experienced a 15-fold increase in income, a doubling of school enrolment rates, and a 16-fold reduction in child mortality after moving to a developed country,

"In addition to benefiting individual migrants and their families, there is a large research literature that evidences the wider beneficial effects that emigration can have for migrants’ countries of origin. Emigration can reduce unemployment and underemployment, contribute to poverty reduction, and – with the appropriate supportive policies – foster broader economic and social development in origin countries in a variety of ways. ... Remittances are generally a less volatile and more reliable source of foreign currency than other capital flows in many developing countries. According to the World Bank, in 1990 migrants remitted around USD 29 billion to lower- and middle-income countries in 1990. This amount had more than doubled to USD 74 billion in 2000 and reached USD 429 billion in 2016. Globally, remittances are now more than three times the amount of official development assistance. Migration can also result in the transfer of skills, knowledge and technology – effects that are hard to measure, but that could have considerable positive impacts on productivity and economic growth. Beyond these economic impacts, emigration can generate beneficial societal consequences for countries of origin, including poor and fragile States. For example, it is increasingly recognized that migrants can play a significant role in post-conflict reconstruction and recovery.

"There is widespread agreement that migration can also generate economic and other benefits for destination countries. The precise nature and size of these benefits at a given time critically depends on the extent to which the skills of migrants are complementary to those of domestic workers, as well as on the characteristics of the host economy. In general, immigration adds workers to the economy, thus increasing the gross domestic product (GDP) of the host country. There are also a variety of ways in which migrants can have positive effects on labour productivity and GDP per head, e.g. if migrants are more skilled than national workers and/or if immigration has positive effects for innovation and skills agglomeration. By nature or necessity, migrants are often more likely to be risk takers, and this quality has led to enormous contributions to many destination countries in areas such as technology, science, the arts and a range of other fields.  ... Immigration increases both the supply of and the demand for labour, which means that labour immigration (including of lower-skilled workers) can generate additional employment opportunities for existing workers. Of course, immigration can also have adverse labour market effects (e.g. on  wages and employment of domestic workers), but most of the research literature finds that these negative impacts tend to be quite small, at least on average. Beyond the labour market and macroeconomy, the immigration of young workers can also help with easing pressures on pensions systems of high-income countries with rapidly ageing populations. Finally, in contrast to popular perceptions, a recent OECD study found that the net fiscal effects of immigration, i.e. the taxes migrants pay minus the benefits and government services they receive, tend to be quite small and – for most OECD countries analysed in the study – positive."

My own sense of these arguments is that the case that migration offers very large benefits of migrants is extremely strong. The case that it benefits countries of origin is probably true, but with a lot of variation. For example, in an emerging market economy with good growth prospects, where people migrate, keep previous contacts, send remittances, and return now and then, migration can be a plus. However, in a low-income economy with poor growth prospects, where anyone who wants upward mobility feels a need to cut ties and leave, migration may not provide much benefit. The question of how migrants affect those in destination countries is most controversial of all. I tend to believe the evidence that there are overall gains, but the gains do not seem to be especially large, and there may well be some unwelcome distributional consequences. Much depends here on the specifics of how a nation implements its immigration policy. 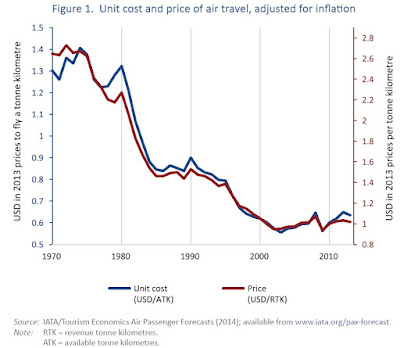 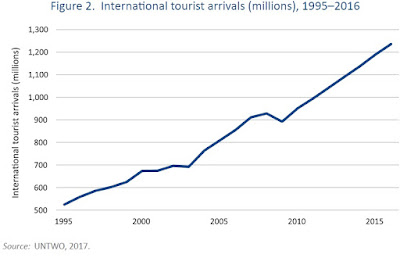 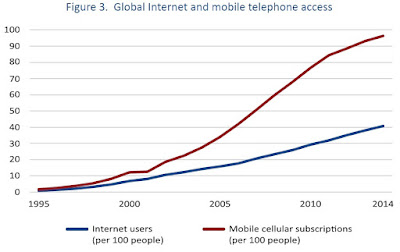 However, there are also some factors that may tend to reduce international migration: namely, the great improvement in the growth prospects of China, India, Mexico, and other emerging markets. When people have improved opportunities for

As I've argued on this blog in the past, it seems likely that the main hot spot for global migration in the next few decades will involve movement from African and the Middle East to nations of Europe. Population growth remains relatively high in many nations across Africa and the Middle East, while growth prospects are relatively low. There are many methods of finding out about immigration possibilities, many transportation routes, and a wealth of historical connections and groups of already-established migrants. For the US, the enormous wave of immigrants from Mexico and other nations in Latin America has eased and even gone slightly into reverse; in fact, immigration to the US from China and India now exceeds that from Mexico. But I suspect that apprehensions across Europe about a rise in immigration are only just beginning.