Attributing Economic Outcomes to Presidents: Year One of Trump

The US economy has performed well on a wide variety of measures in the year since President Trump was inaugurated on January 20, 2017.  The unemployment rate was 4.8% in January 2017 and 4.1% in December 2017. The unemployment rate among black Americans has fallen to its lowest level in the 45 years that regular statistics have been kept. The most recent estimates of GDP growth (which are preliminary and subject to later revision) show GDP growth of 3.1% in the second quarter of 2017 and 3.2% in the third quarter. Stock market indexes like the S&P 500 have risen dramatically.

The new year has brought a wave of economic good-news stories in the business press.  Business investment spending seem to be on the rise. By one measure, US manufacturing in 2017 has its best year since 2004. News sources not known to be overly friendly to the Trump administration, like the New York Times, are reporting stories like "The Trump Effect: Business, Anticipating Less Regulation, Loosens Purse Strings." US carbon emissions declined in 2017, which the US Energy Information Administration attributes in substantial part to fewer days of hot weather than in 2016--thus reducing the need for heavy use of air conditioning.

How much credit does President Trump deserve for this showing? Trump's critics quickly point out that an enormous economy like the United States has considerable momentum. For example,  Paul Krugman says that Trump gets "essentially zero" credit for US economic performance in 2017.  I agree that the effect of presidents--and especially newly elected presidents--on the economy is often overrated. But the observation that a US president has only a modest effect on the economy during a first year of office often includes a heavy dose of partisan bias.

Maybe I missed it, but when Trump had been elected and was headed toward taking office in January 2017, I didn't hear a lot of his critics say: "Well, the US economy is really set up for a strong year in 2017, but when it happens, Trump won't deserve any credit." Instead, there were predictions of grave difficulties ahead. Moreover, if the US economy had headed south early in 2017, with rising unemployment, sluggish output, stagnant investment, and a falling stock market, I strongly suspect that Trump critics like Krugman would place the blame on Trump's election. And in that case, it would be Republicans and Trump sympathizers arguing that the new president had inherited an unexpectedly poor situation and should receive essentially zero blame.

It's interesting to reflect back on previous presidencies, and apply the standard of "for the first year a president is in office, what happens (for good or bad) is largely what they inherited."  For example, the Great Recession ended in June 2009, six months into President Obama's first term. By this standard, the exit from the Great Recession should be credited to the economy and policies inherited from the previous Bush administration. The 2001 recession arrived in March of that year, just two months after President George W. Bush had assumed office. By this standard, that recession should be attributed to the economy and policies inherited from the Clinton administration. The incoming Clinton administration in 1993 inherited an economy with a falling unemployment rate, which by this standard should be attributed to the outgoing Bush administration.

I'm sympathetic to the argument that the first year of any presidential administration is essentially inherited, but this only sharpens the question of why the US economy performed so well in 2017. I'd suggest three possibilities.

First, the election campaign of 2016 seemed to involve all the candidates talking down the economy. But the national unemployment rate had fallen to 5,0% in September 2015, and has stayed at or below that level since then.  Here are the quarterly rates of real GDP growth since 2000.  The annualized growth rates of slightly more than 3% in Q2 and Q3 of 2017 are just fine, but they don't really stand out from a number of previous quarters since about 2010.  Overall, the US economy has considerable forward momentum at this point. It has continued to grow despite a succession of interest rate increases, and despite some terrible weather-related events in 2017. Growth across the main sectors of the economy has been quite balanced, rather than tilted toward a sector like housing or high-tech in a way that can lead to instability. 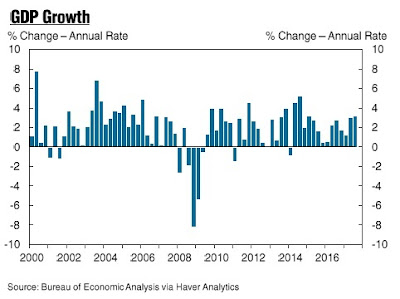 Second, although Americans like to think of our economy as an outpost remote from the rest of the world, we are in fact tied into the global economy in a number of ways. The World Bank argues that 10 years after the Great Recession, the global economy is at last again producing at its full potential. When an economic pattern happens across a number of nations at the same time, it's wise to suspect that there is a common underlying force that goes beyond national policies. For example, the fact that income inequality has been rising across many nations of the world, not just the US, suggests that the reasons for that increase are deeper economic patterns that affect many countries, not specific national actions. Similarly, with unemployment rates falling and stock markets rising in many countries around the world during 2017, it suggests that the reasons for that increase are patterns that cross many countries, not specific national actions.  My own sense is that many firms and banks had been holding their breath for a few years, waiting to be sure that the carnage of the Great Recession is behind them--and now they are stepping up.

Third, even with the US domestic momentum and full-potential output of the world economy taken into account, it does feel to me as if the Trump presidency was in some way an inflection point. The Trump administration's two main economic policy changes in 2017 involve a much more hands-off regulatory environment and the recently released tax bill. On the merits of these policies, I've expressed some concerns about both. Regulatory reform can be a positive step for an economy, and the UK and Canada have shown some ways to carry it out, but reform that does more to sort out regulations that justify their costs from those that don't is one thing, while just blocking and negating regulations willy-nilly is something else. The recent tax reform bill has many moving parts, but to me, the crucial question is the extent to which lower tax rates and other changes that benefit corporations pay off in a demonstrable surge in investment and wages. There are a bevy of recent anecdotes of companies announcing such changes, but in the next year or two, it will be interesting to check the follow-through on those promises--or whether most firms just cash the tax breaks, pay big bonuses to executives, and continue their investment and and wage-paying along much the same trajectory.

But whatever the merits of  these changes, it's not possible that their effects would have been directly felt early in 2017. Instead, firms would need to be reacting to the expectation of an improved business climate in the future. Like a lot of economists, I mistrust using "business climate" or "business confidence" as an explanation.  I'd prefer to be able to trace back "business confidence" to specific measurable parts of the economy, and to focus on those instead. But just because something is hard to measure doesn't mean it isn't real. It seems at least plausible that firms in a number of industries felt that the US business climate was not supportive, and interpreted Trump's election as a sign that polies more likely to support profit-seeking firms were on their way.

In thinking about business confidence, it may also be that some of Trump's important policy steps were the ones not taken. There were concerns that Trump might trigger a trade war. But while he has been hostile to additional trade agreements (as were the main Democratic party contenders for President in 2016), he did little to add impediments to trade in 2017.  Similarly, there was concern that Trump might replace Federal Reserve chair Janet Yellen with someone who didn't have the necessary trust and connections in financial markets, but the selection of Jerome Powell seemed to calm those concerns.

There's an old line commonly attributed to John Naisbitt (I don't have a citation) that "leadership involves finding a parade and getting in front of it." Politicians often excel at this kind of leadership, and in that spirit,  I don't blame President Trump for claiming excessive credit for the good news of the US economy in 2017. When it comes to economic outcomes, presidents are a bit like the coaches of professional sports teams--that is, they often get an outsized share of the credit for success and the blame for failure.