The digital economy provides a number of services for which the marginal price (given an internet connection) is zero: games like Candy Crush, email, web searches, access to information and entertainment, and many more. Because users are not paying an additional price for using these services, this form of economic output doesn't seem to be captured by conventional economic statistics. Leonard Nakamura, Jon Samuels , and Rachel Soloveichik offer some ways of thinking about the question in in "Measuring the `Free' Digital Economy within theGDP and Productivity Accounts, written for the Economic Statistics Centre of Excellence, an independent UK research center funded by Britain's Office of National Statistics (December 2017, ESCoE Discussion Paper 2017-3).

Essentially, they propose that the economic value of "free" content can be measured by the marketing and advertising revenue that it generates. In other words, you "pay" for "free" content not with money, but by selling a slice of your attention to advertising. Thus, their approach is a practical application of the saying: "If you're not paying for it, you're the product." They write:


”Free” digital content is pervasive. Yet, unlike the majority of output produced by the private business sector, many facets of the digital economy (e.g., Google, Facebook, Candy Crush) are provided without a market transaction between the final user of the content and the producer of the content. ... Furthermore, because these technologies are so pervasive and have induced large changes in consumer behavior and business practice, these open questions have evolved into arguments that the exclusion of these technologies from the national accounts leads to a significant downward bias in official estimates of growth and productivity.

The first contribution of this paper is to provide an argument that, yes, it is possible to measure many aspects of the ”free” digital economy via the lens of a production account. ... To be clear at the outset, this approach does not provide a willingness to pay or welfare valuation of the “free” content. But this approach does provide an estimate of the value of the content that is consistent with national accounting estimates of production.

We model the provision of “free” content as a barter transaction. Consumers and businesses receive content in exchange for exposure to advertising or marketing. Our approach reduces to treating the provision of the ”free” digital content as payment in kind for viewership services produced by households and businesses. Put differently, the national accounts currently ignore the role of households in the production of advertising and marketing. In our methodology, households are active producers of viewership services that they barter for consumer entertainment. ...

A number of interesting insights emerge from this approach. Here's a figure showing total US advertising spending over time as a share of GDP. Total advertising revenue has been fairly stable over time, with the abrupt fall in print advertising being mostly offset by a rise in digital advertising. 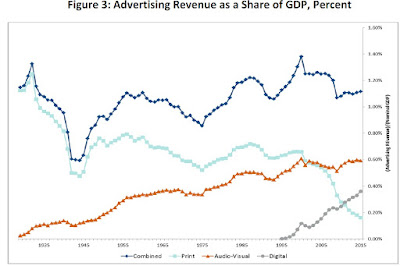 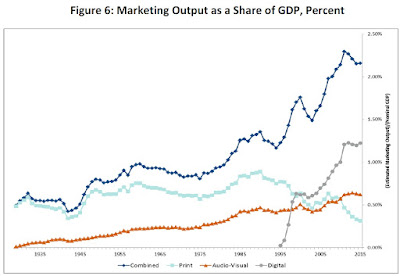 Overall, measuring the value of the "free" digital economy has relatively little effect on output or trends in total factor productivity (TFP)_. They write (citations and footnotes omitted):

This analysis seems broadly sensible and correct to me: for a previous argument along similar lines, see  "How Well Does GDP Measure the Digital Economy?" (July 19, 2016). But it comes with a warning that applies to all discussions of economic output, and is recognized repeatedly by the authors here.

GDP is measured by the monetary value of what is bought and sold, but it doesn't measure consumer welfare (or "happiness" or "utility") in a direct way. Thus, it's possible that even if the gains to GDP from including "free" digital services are relatively small, perhaps those small gains are increasing consumer welfare and happiness by a much larger amount. Of course, one can make a similar argument that the monetary value of certain other outputs, from broadcast television back in the 1960s and 1970s, or the availability of aspirin, is a lot less than the consumer welfare generated by these products. Measuring "the economy" is an exercise of adding up sales receipts, while thinking about benefits and costs of economic patterns (as has long been recognized) is a much broader exercise.
Posted by Timothy Taylor at 8:00 AM