I was hired back in 1986 to be the Managing Editor for a new academic economics journal, at the time unnamed, but which soon launched as the Journal of Economic Perspectives. The JEP is published by the American Economic Association, which back in 2011 decided--to my delight--that it would be freely available on-line, from the current issue back to the first issue. Here, I'll start with Table of Contents for the just-released Winter 2018 issue, which in the Taylor household is known as issue #123. Below that are abstracts and direct links for all of the papers. I will blog more specifically about some of the papers in the next week or two, as well. 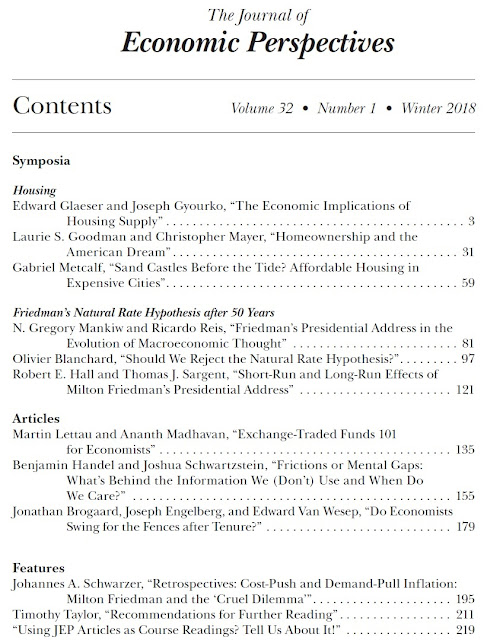 "The Economic Implications of Housing Supply," by Edward Glaeser and Joseph Gyourko
In this essay, we review the basic economics of housing supply and the functioning of US housing markets to better understand the distribution of home prices, household wealth, and the spatial distribution of people across markets. We employ a cost-based approach to gauge whether a housing market is delivering appropriately priced units. Specifically, we investigate whether market prices (roughly) equal the costs of producing the housing unit. If so, the market is well-functioning in the sense that it efficiently delivers housing units at their production cost. The gap between price and production cost can be understood as a regulatory tax. The available evidence suggests, but does not definitively prove, that the implicit tax on development created by housing regulations is higher in many areas than any reasonable negative externalities associated with new construction. We discuss two main effects of developments in housing prices: on patterns of household wealth and on the incentives for relocation to high-wage, high-productivity areas. Finally, we turn to policy implications.
Full-Text Access | Supplementary Materials

"Sand Castles before the Tide? Affordable Housing in Expensive Cities," Gabriel Metcalf
This article focuses on cities with unprecedented economic success and a seemingly permanent crisis of affordable housing. In the expensive cities, policymakers expend great amounts of energy trying to bring down housing costs with subsidies for affordable housing and sometimes with rent control. But these efforts are undermined by planning decisions that make housing for most people vastly more expensive than it has to be by restricting the supply of new units even in the face of growing demand. I begin by describing current housing policy in the expensive metro areas of the United States. I then show how this combination of policies affecting housing, despite internal contradictions, makes sense from the perspective of the political coalitions that can form in a setting of fragmented local jurisdictions, local control over land use policies, and homeowner control over local government. Finally, I propose some more effective approaches to housing policy. My view is that the effects of the formal affordable housing policies of expensive cities are quite small in their impact when compared to the size of the problem—like sand castles before the tide. I will argue that we can do more, potentially much more, to create subsidized affordable housing in high-cost American cities. But more fundamentally, we will need to rethink the broader set of exclusionary land use policies that are the primary reason that housing in these cities has become so expensive. We cannot solve the problem unless we fix the housing market itself.
Full-Text Access | Supplementary Materials

"Friedman's Presidential Address in the Evolution of Macroeconomic Thought," by N. Gregory Mankiw and Ricardo Reis
Milton Friedman's presidential address, "The Role of Monetary Policy," which was delivered 50 years ago in December 1967 and published in the March 1968 issue of the American Economic Review, is unusual in the outsized role it has played. What explains the huge influence of this work, merely 17 pages in length? One factor is that Friedman addresses an important topic. Another is that it is written in simple, clear prose, making it an ideal addition to the reading lists of many courses. But what distinguishes Friedman's address is that it invites readers to reorient their thinking in a fundamental way. It was an invitation that, after hearing the arguments, many readers chose to accept. Indeed, it is no exaggeration to view Friedman's 1967 AEA presidential address as marking a turning point in the history of macroeconomic research. Our goal here is to assess this contribution, with the benefit of a half-century of hindsight. We discuss where macroeconomics was before the address, what insights Friedman offered, where researchers and central bankers stand today on these issues, and (most speculatively) where we may be heading in the future.
Full-Text Access | Supplementary Materials

"Should We Reject the Natural Rate Hypothesis?" by Olivier Blanchard
Fifty years ago, Milton Friedman articulated the natural rate hypothesis. It was composed of two sub-hypotheses: First, the natural rate of unemployment is independent of monetary policy. Second, there is no long-run trade-off between the deviation of unemployment from the natural rate and inflation. Both propositions have been challenged. The paper reviews the arguments and the macro and micro evidence against each. It concludes that, in each case, the evidence is suggestive, but not conclusive. Policymakers should keep the natural rate hypothesis as their null hypothesis, but keep an open mind and put some weight on the alternatives.
Full-Text Access | Supplementary Materials

"Short-Run and Long-Run Effects of Milton Friedman's Presidential Address," by Robert E. Hall and Thomas J. Sargent
The centerpiece of Milton Friedman's (1968) presidential address to the American Economic Association, delivered in Washington, DC, on December 29, 1967, was the striking proposition that monetary policy has no longer-run effects on the real economy. Friedman focused on two real measures, the unemployment rate and the real interest rate, but the message was broader—in the longer run, monetary policy controls only the price level. We call this the monetary-policy invariance hypothesis. By 1968, macroeconomics had adopted the basic Phillips curve as the favored model of correlations between inflation and unemployment, and Friedman used the Phillips curve in the exposition of the invariance hypothesis. Friedman's presidential address was commonly interpreted as a recommendation to add a previously omitted variable, the rate of inflation anticipated by the public, to the right-hand side of what then became an augmented Phillips curve. We believe that Friedman's main message, the invariance hypothesis about long-term outcomes, has prevailed over the last half-century based on the broad sweep of evidence from many economies over many years. Subsequent research has not been kind to the Phillips curve, but we will argue that Friedman's exposition of the invariance hypothesis in terms of a 1960s-style Phillips curve is incidental to his main message.
Full-Text Access | Supplementary Materials

"Exchange-Traded Funds 101 for Economists," by Martin Lettau and Ananth Madhavan
Exchange-traded funds (ETFs) represent one of the most important financial innovations in decades. An ETF is an investment vehicle, with a specific architecture that typically seeks to track the performance of a specific index. The first US-listed ETF, the SPDR, was launched by State Street in January 1993 and seeks to track the S&P 500 index. It is still today the largest ETF by far, with assets of $178 billion. Following the introduction of the SPDR, new ETFs were launched tracking broad domestic and international indices, and more specialized sector, region, or country indexes. In recent years, ETFs have grown substantially in assets, diversity, and market significance, including substantial increases in assets in bond ETFs and so-called "smart beta" funds that track certain investment strategies often used by actively traded mutual funds and hedge funds. In this paper, we begin by describing the structure and organization of exchange-traded funds, contrasting them with mutual funds, which are close relatives of exchange-traded funds, describing the differences in how ETFs operate and their potential advantages in terms of liquidity, lower expenses, tax efficiency, and transparency. We then turn to concerns over whether the rise in ETFs may raise unexpected risks for investors or greater instability in financial markets. While concerns over financial fragility are worth serious consideration, some of the common concerns are overstated, and for others, a number of rules and practices are already in place that offer a substantial margin of safety.
Full-Text Access | Supplementary Materials

"Frictions or Mental Gaps: What's Behind the Information We (Don't) Use and When Do We Care?" by Benjamin Handel and Joshua Schwartzstein
Consumers suffer significant losses from not acting on available information. These losses stem from frictions such as search costs, switching costs, and rational inattention, as well as what we call mental gaps resulting from wrong priors/worldviews, or relevant features of a problem not being top of mind. Most research studying such losses does not empirically distinguish between these mechanisms. Instead, we show that most highly cited papers in this area presume one mechanism underlies consumer choices and assume away other potential explanations, or collapse many mechanisms together. We discuss the empirical difficulties that arise in distinguishing between different mechanisms, and some promising approaches for making progress in doing so. We also assess when it is more or less important for researchers to distinguish between these mechanisms. Approaches that seek to identify true value from demand, without specifying mechanisms behind this wedge, are most useful when researchers are interested in evaluating allocation policies that strongly steer consumers towards better options with regulation, traditional policy instruments, and defaults. On the other hand, understanding the precise mechanisms underlying consumer losses is essential to predicting the impact of mechanism policies aimed primarily at reducing specific frictions or mental gaps without otherwise steering consumers. We make the case that papers engaging with these questions empirically should be clear about whether their analyses distinguish between mechanisms behind poorly informed choices, and what that implies for the questions they can answer. We present examples from several empirical contexts to highlight these distinctions.
Full-Text Access | Supplementary Materials

"Do Economists Swing for the Fences after Tenure?" by Jonathan Brogaard, Joseph Engelberg and Edward Van Wesep
Using a sample of all academics who pass through top 50 economics and finance departments from 1996 through 2014, we study whether the granting of tenure leads faculty to pursue riskier ideas. We use the extreme tails of ex-post citations as our measure of risk and find that both the number of publications and the portion consisting of "home runs" peak at tenure and fall steadily for a decade thereafter. Similar patterns hold for faculty at elite (top 10) institutions and for faculty who take differing time to tenure. We find the opposite pattern among poorly cited publications: their numbers rise post-tenure.
Full-Text Access | Supplementary Materials

"Retrospectives: Cost-Push and Demand-Pull Inflation: Milton Friedman and the "Cruel Dilemma," by Johannes A. Schwarzer
This paper addresses two conflicting views in the 1950s and 1960s about the inflation-unemployment tradeoff as given by the Phillips curve. Many economists at this time emphasized the issue of a seemingly unavoidable inflationary pressure at or even below full employment. In contrast, Milton Friedman was convinced that full employment and price stability are not conflicting policy objectives. This dividing line between the two camps ultimately rested on fundamentally different views about the inflationary process: For economists of the 1950s and 1960s cost-push forces are responsible for the apparent conflict between price stability and full employment. On the other hand, Friedman, who regarded inflation to be an exclusively monetary phenomenon, rejected the notion of ongoing inflationary cost-push pressures at full employment. Besides his emphasis on the full adjustment of inflation expectations, this rejection of cost-push theories of inflation, which implied a decoupling of the two previously perceived incompatible policy objectives, was the other important element in Friedman's attack on the Phillips curve tradeoff in his 1967 presidential address to the American Economic Association.
Full-Text Access | Supplementary Materials

"Using JEP Articles as Course Readings? Tell Us About It!"
Full-Text Access | Supplementary Materials
Posted by Timothy Taylor at 8:51 AM