The data below is from the AP Data--Archived Data 2016 (scroll down to the National and State Summary Reports, and then look just at the National Data for the US). 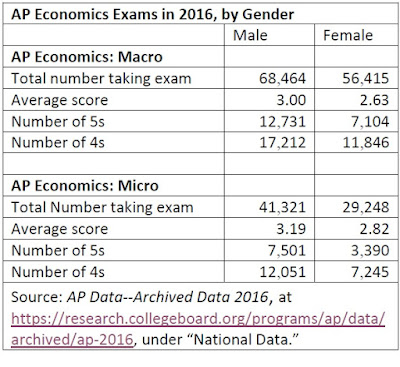 More male students take the AP economics exams than females, although overall, females take more AP exams than men. The scores of males are higher, and the number of males with a score of 4 or 5 on the exams is higher, too. I have no wish to overinterpret these numbers, but a couple of quick thoughts seem fair.

2) To the extent that many students who arrive in college have at least a fuzzy idea of the areas in which they might wish to concentrate already in place, colleges that want to move toward more gender balance in their undergraduate economic enrollments will need to overcome some patterns that have already been set in high school. If the pipeline of women who major in economics isn't expanded substantially, it will be difficult for the number of women who earn PhD degrees in economics to expand substantially.