Most Global Violent Deaths are Murder, Not War

I did not know that by far most violent deaths in the world are a result of murder, not war. The pattern is reported in Global Violent Deaths 2017: Time to Decide, by Claire Mc Evoy and Gergely Hideg. It's a report from Small Arms Survey, which is a research center at the Graduate Institute of International and Development Studies in Geneva, Switzerland. The report notes:

'"In 2016, interpersonal and collective violence claimed the lives of 560,000 people around the world. About 385,000 of them were the victims of intentional homicides, 99,000 were casualties of war, and the rest died in unintentional homicides or due to legal interventions. ...

"In 2016, firearms were used to kill about 210,000 people—38 per cent of all victims of lethal violence. About 15 per cent of these individuals died in direct conflict, while the majority fell victim to intentional homicide (81 per cent). ...

"In terms of homicides alone, states could save up to 825,000 lives between 2017 and 2030 if they gradually stepped up their approach to crime control and prevention to reach the violence reduction levels of the top performers in their respective world regions. In so doing, states in the subregion of Latin America and the Caribbean would benefit most, saving as many as 489,000 lives in total by 2030, followed by states in South-eastern Asia (86,000 lives) and Eastern Africa (56,000 lives) ..."

For the situation of deaths in armed conflict, the SAS report shows that in recent years by far the largest share are represented by events in Syria, Iraq, and Afghanistan. 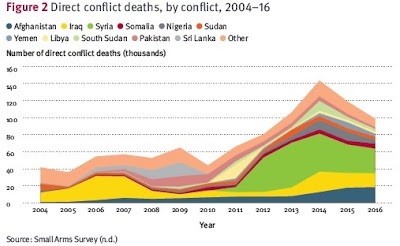 Homage: I ran into the SAS report because it was a lead story in the April 5 issue of the Economist magazine.