The Share of Itemizers and the Politics of Tax Reform

In the last 20 years or so, typically about 30-35% of federal tax returns found it worthwhile to itemize deductions. 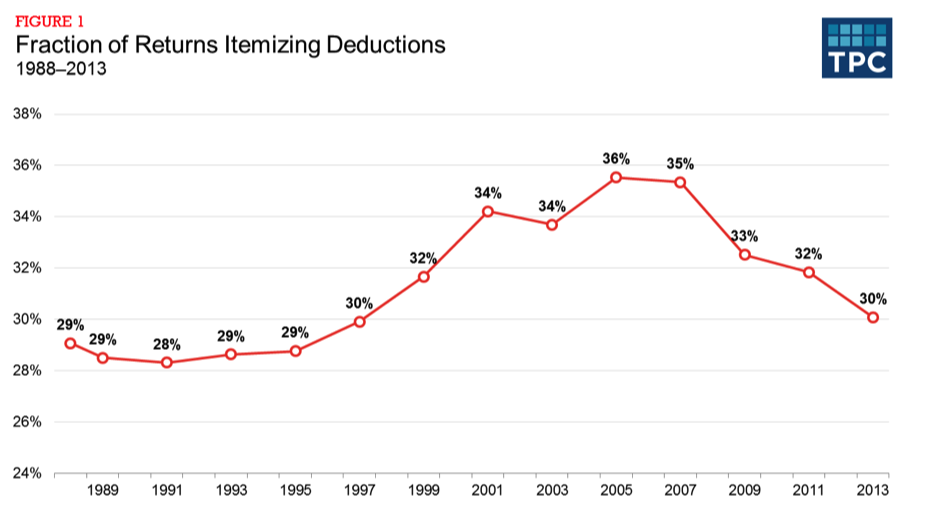 But the Tax Cuts and Jobs Act passed into law and signed by President Trump in December 2017 will change this pattern substantially. The standard deduction increases substantially, while limits or caps are imposed on some prominent deductions. As a result, the number of taxpayers who will find it worthwhile to itemize will drop substantially.

Simulations from the Tax Policy Center, for example, suggest that the total number of itemizers will fall by almost 60%, from 46 million to 19 million -- which means that in next year's taxes, maybe only about 11% of all returns will find it worthwhile to itemize.

Set aside all the arguments over pros and cons and distributional effects of the changes in the standard deduction and the individual deductions, and focus on the political issue. It seems to me that this dramatic fall in the number of taxpayers, especially if it is sustained for a few years, will realign the political arguments over future tax reform. If one-third or so of taxpayers are itemizing--and those who itemize are typically those with high incomes and high deductions who make a lot of noise--then reducing deductions will be politically tough. But if only one-ninth of taxpayers are itemizing, while eight-ninths are just taking the standard deduction, then future reductions in the value of tax deductions may be easier to carry out. It will be interesting to see if the political dynamics of tax reform shift along these lines in the next few years.
Posted by Timothy Taylor at 12:00 PM