US Mergers and Antitrust in 2017

Each year the Federal Trade Commission and and the Department of Justice Antitrust Division publish the Hart-Scott-Rodino Annual Report, which offers an overview of merger and acquisition activity and antitrust enforcement during the previous year. The Hart-Scott-Rodino legislation requires that all mergers and acquisitions above a certain size--now set at $80.8 million--be reported to the antitrust authorities before they occur. The report thus offers an overview of recent merger and antitrust activity in the United States. 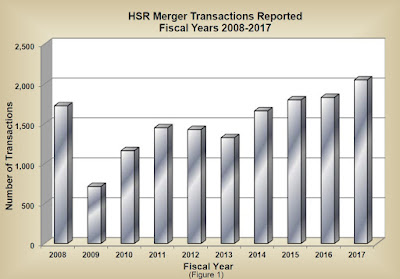 The report also provides a breakdown on the size of mergers. Here's what it looked like in 2017. As the figure shows, there were 255 mergers and acquisitions of more than $1 billion. 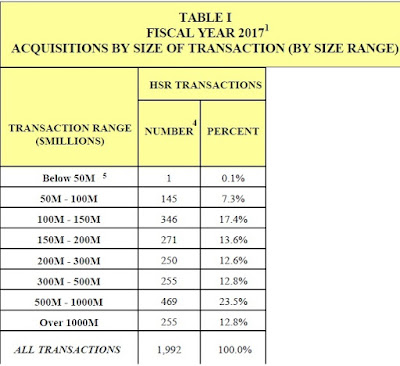 After a proposed merger is reported, the FTC or the US Department of Justice can request a "second notice" if it perceives that the merger might raise some anticompetitive issues. In the last few years, about 3-4% of the reported mergers get this "second request." 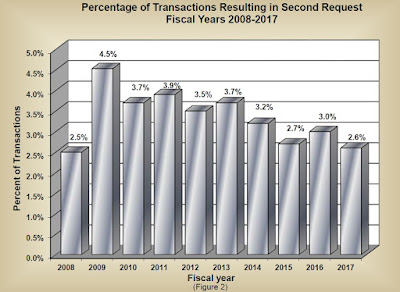 This percentage may seem low, but it's not clear what level is appropriate.. After all, the US government isn't second-guessing whether mergers and acquisitions make sense from a business point of view. It's only asking whether the merger might reduce competition in a substantial way. If two companies that aren't directly competing with other combine, or if two companies combine in a market with a number of other competitors, the merger/acquisition may turn out well or poorly from a business point of view, but it is less likely to raise competition issues.

Teachers of economics may find the report a useful place to come up with some recent examples of antitrust cases, and there are also links to some of the underlying case documents and analysis (which students can be assigned to read). Here are a few examples from 2017 cases of the Antitrust Division at the US Department of Justice and the Federal Trade Commission. In the first one, a merger was blocked because it would have reduced competition for disposal of low-level radioactive waste.   In the second, a merger between two sets of movie theater chains was allowed only a number of conditions were met aimed at preserving competition in local markets. The third case involved a proposed merger between the two largest providers daily paid fantasy sports contests, and the two firms decided to drop the merger after it was challenged.

In United States v. Energy Solutions, Inc., Rockwell Holdco, Inc., Andrews County Holdings, Inc. and Waste Control Specialists, LLC, the Division filed suit to enjoin Energy Solutions, Inc. (ES), a wholly-owned subsidiary of Rockwell Holdco, Inc., from acquiring Waste Control Specialists LLC (WCS), a wholly-owned subsidiary of Andrews County Holdings, Inc. The complaint alleged that the transaction would have combined the only two licensed commercial low-level radioactive waste (LLRW) disposal facilities for 36 states, Puerto Rico and the District of Columbia. There are only four licensed LLRW disposal facilities in the United States. Two of these facilities, however, did not accept LLRW from the relevant states. The complaint alleged that ES’s Clive facility in Utah and WCS’s Andrews facility in Texas were the only two significant disposal alternatives available in the relevant states for the commercial disposal of higher-activity and lower-activity LLRW. At trial, one of the defenses asserted by the defendants was that that WCS was a failing firm and, absent the transaction, its assets would imminently exit the market. The Division argued that the defendants did not show that WCS’s assets would in fact imminently exit the market given its failure to make good-faith efforts to elicit reasonable alternative offers that might be less anticompetitive than its transaction with ES. On June 21, 2017, after a 10-day trial, the U.S. District Court for the District of Delaware ruled in favor of the Division. ...

In United States v. AMC Entertainment Holdings, Inc. and Carmike Cinemas, Inc., the Division challenged AMC Entertainment Holdings, Inc.’s proposed acquisition of CarmikeCinemas, Inc. AMC and Carmike were the second-largest and fourth-largest movie theatre chains, respectively, in the United States. Additionally, AMC owned significant equity in National CineMedia, LLC (NCM) and Carmike owned significant equity in SV Holdco, LLC, a holding company that owns and operates Screenvision Exhibition, Inc. NCM and Screenvision are the country’s predominant preshow cinema advertising networks, covering over 80 percent of movie theatre screens in the United States. The complaint alleged that the proposed acquisition would have provided AMC with direct control of one of its most significant movie theatre competitors, and in some cases, its only competitor, in 15 local markets in nine states. As a result, moviegoers likely would have experienced higher ticket and concession prices and lower quality services in these local markets. The complaint further alleged that the acquisition would have allowed AMC to hold sizable interests in both NCM and Screenvision post-transaction, resulting in increased prices and reduced services for advertisers and theatre exhibitors seeking preshow services. On December 20, 2016, a proposed final judgment was filed simultaneously with the complaint settling the lawsuit. Under the terms of the decree, AMC agreed to (1) divest theatres in the 15 local markets; (2) reduce its equity stake in NCM to 4.99 percent; (3) relinquish its seats on NCM’s Board of Directors and all of its other governance rights in NCM; (4)transfer 24 theatres with a total of 384 screens to the Screenvision cinema advertising network; and (5) implement and maintain “firewalls” to inhibit the flow of competitively sensitive information between NCM and Screenvision. The court entered the final judgment on March 7, 2017. ...