The Challenges of Measuring Discrimination Against LGBTI Individuals

It seems quite clear (at least to me) that there is often discriminatory feeling against lesbians, gay men, bisexuals, transgender and intersex people. One can also observe a range of survey evidence and outcomes for people in these categories in terms of family life (including marriage and parenthood), education, health, and economic outcomes. But for economists, at least, drawing a firm connection from discrimination to outcomes can be tough. Marie-Anne Valfort has written "LGBTI in OECD Countries: A Review," which appears in the OECD Social, Employment and Migration Working Papers No. 198  (June 22, 2017).

The lengthy report pulls together a considerable body of evidence that exists on the topic, and is also clear-eyed and thoughtful about the analytical difficulties that arise in this area. Here, I'll sidestep her discussion of family life, education, and health issues, and focus on economic outcomes.

One problem in this area limitations on data.  In survey data, for example, people give dramatically different answers to whether they identify as LGB, whether they have participated in same-sex sexual behavior, or whether they have sometimes felt a same-sex attraction. If it is hard to define a group, then coming up with summary statistics to characterize outcomes for that group will be difficult. And carrying out studies that seek to isolate the effects of discrimination will be difficult, too. 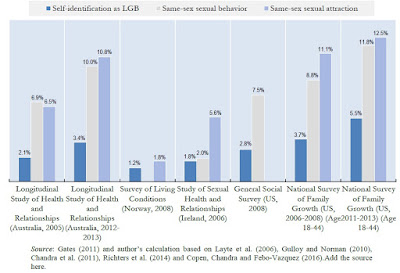 After reviewing the evidence for the US, where the data is better than in many places, Valfort offers this summary (references to later sections of the paper are omitted from the quotation:


"Tentative but conservative measures suggest that LGBTI stand for a sizeable minority. They represent approximately 4.5% of the total population in the US, a proportion that can be broken down as follows among LGBTI subgroups (bearing in mind that these subgroups partly overlap): 3.5% for lesbians, gay men and bisexuals if one relies on sexual self-identification known to yield lower estimates than sexual behaviour or attraction, 0.6% for transgender people and 1.1% for intersex people."

As Valfont summarizes, there have been three broad ways to look at the extent to which differences across groups are due to discrimination. One approach looks at "observational" data, and tries to adjust for factors that seem likely to matter. For example, one could look at income for people, making a statistical adjustment for levels of education, job experience, age, occupation type, and so on. If there is a wage gap remaining after taking these other factors into account, then there is at least some reason to suspect that discrimination might be an issue. However, drawing firm conclusions from such studies is difficult, for a number of reasons that Valfont describes:

-- It seems likely that LGBTI people are likely to move to places where social acceptance of their group is greater and discrimination is less. "Failing to control for this geographic sorting could therefore lead to conclude that LGBT people do not face discrimination while they actually do, an error better known as the “omitted variables bias”.  The underlying problem is that factors not observed in the data can make a difference.

-- Data is weak, and "disclosure of sexual orientation, gender identity or intersex status of LGBTI to their social environment is not a given." It is possible, as Valfont writes: In other words, only the most successful gay men and lesbians (those suffering the least from discrimination) may disclose their sexual orientation to the interviewer."

-- Valfont points out that a number of studies measure the  LGBTI population indirectly, based on surveys where people say they are living with a same-sex partner. " Put differently, most population-based surveys only allow for identifying partnered homosexuals and comparing how they fare relative to their heterosexual counterparts ...  that is surely not representative of the LGBTI population as a whole."

-- Adjusting for other factors isn't as simple as it seems, either. For example, say for the sake of argument that there is discrimination against LGBTI indiviuals in school and when growing up and thinking about occupational possibilities. Then if a researcher comes along later, and does a statistical adjustment for level of education and occupation, that researcher is (in a statistical sense) wiping out any discrimination which occurred at that earlier stage.

-- There is an issue of "household specialization bias." In heterosexual household, it is still fairly common to find a situation in which the man has a longer-term and heavier-hour commitment to the (paid) labor force than does the woman. "In heterosexual households, men are indeed typically more engaged in market activities than are women. Therefore, the average partnered heterosexual man should be more involved in the labour market than the average partnered gay man, while the average partnered heterosexual woman should be less involved in this market than the average partnered lesbian.:" Thus, findings of a wage penalty for gay men and wage premium for lesbians are common:  "However, multivariate analyses of individual labour earnings with couples-based survey data do not provide results consistent with lower job satisfaction among both gay men and lesbians. These analyses, which amount to 18 studies (26 estimates for gay men and 30 estimates for lesbians) ... reveal an earnings penalty for partnered gay men but an earnings premium (or no effect) for partnered lesbians. ...[T]his pattern is observed irrespective of the country where, or the time when the data used in these studies were collected. More precisely, partnered gay men suffer an average penalty of 8% while partnered lesbians enjoy an average premium of 7%." Sorting out how to think about this household specialization bias and to adjust for it isn't an easy task.

Another broad approach to looking at discrimination is "experimental" studies. Broadly speaking, these fall into two categories. In "correspondence" studies, researchers send out a bunch of job applications that are meant to be essentially the same, except that some of them have a fairly clear identifier that the applicant is likely to be LGBTI (or in other studies, there will be information to reveal race/ethnicity or male/female). Valfort reports:


"[T]he 13 correspondence studies that have tested for hiring discrimination based on sexual orientation typically point to an unfair treatment of the gay male and lesbian applicants: on average, they are 1.8 times less likely to be called back by the recruiter than are their heterosexual counterparts. For gay men, the heterosexual-to-homosexual callback rates ratio varies from 1.1 (Sweden – Ahmed, Andersson and Hammarstedt (2013b) and the UK - Drydakis (2016)) to 3.7 (Cyprus – Drydakis (2014b)) with an average at 1.9. For lesbians, it varies from 0.9 (Belgium – Baert (2014)) to 4.6 (Cyprus – Drydakis (2014b)) with an average at 1.7. Consistent with attitudes toward gay men being more negative than attitudes toward lesbians, homosexual men face slightly stronger hiring discrimination than do homosexual women."

Such studies offer compelling evidence that discrimination exists, but by the nature of such studies, they can only look at the non-face-to-face part of the job market. As Valfort writes:

"Moreover, this weakness implies that discrimination in the labour market is measured at only one point of an individual’s career, i.e. his/her access to a job interview. It says nothing however about his/her likelihood of being hired, or paid equally and promoted once hired. Nevertheless, audit studies indicate that, conditional on being interviewed, individuals from the minority (i.e. the group that typically receives the lowest rate of invitation to a job interview) are also less likely to be hired (e.g. Cédiey and Foroni (2008)). These findings suggest that correspondence studies underestimate hiring discrimination."

The other experimental approach are "audit" studies, which involve people who have been trained to play a role of a person with a certain background who is applying for job, or for a mortgage, or trying to rent an apartment, and so on. Audit studies have been a powerful way of revealing racial discrimination in a US context, but they have difficulties. Because they involve real people doing real-life applications and waiting for answers, such studies are often time-consuming and expensive. But they are workable in certain contexts. Valfont gives many examples, but here are two of them:

Various field experiments have shown that sexual minorities face discrimination in their everyday life. For instance, Jones (1996) sends letters from either a same-sex or opposite-sex couple, requesting weekend reservations for a one-bed room in hotels and bed-and-breakfast establishments in the US. His results show that opposite-sex couples are granted 20% more reservations than both male and female same-sex couples. Similarly, Walters and Curran (1996) conduct an audit study where same-sex and opposite-sex couples enter retail stores in the US while an observer measures the time it takes for the staff to welcome them. They find this time to be significantly less for heterosexual than for homosexual couples who often were not assisted and who were more likely to be repudiated.

Discrimination can manifest itself in many ways: in social settings, education, health, family life, occupational pressures, job interviews, promotions and wage raises, and more. Understanding where its manifestations are more powerful can be an important step in thinking about how best to address it.

I do wonder if changes in the legal status of LGBTI individuals may offer a handle on looking at different types of discrimination. For example, the number of gay marriages reveals something about the number of such marriages that would have been blocked earlier. Similarly, changes in occupations and pay patterns that happen after legal changes will reveal something about earlier patterns of discrimination, too.